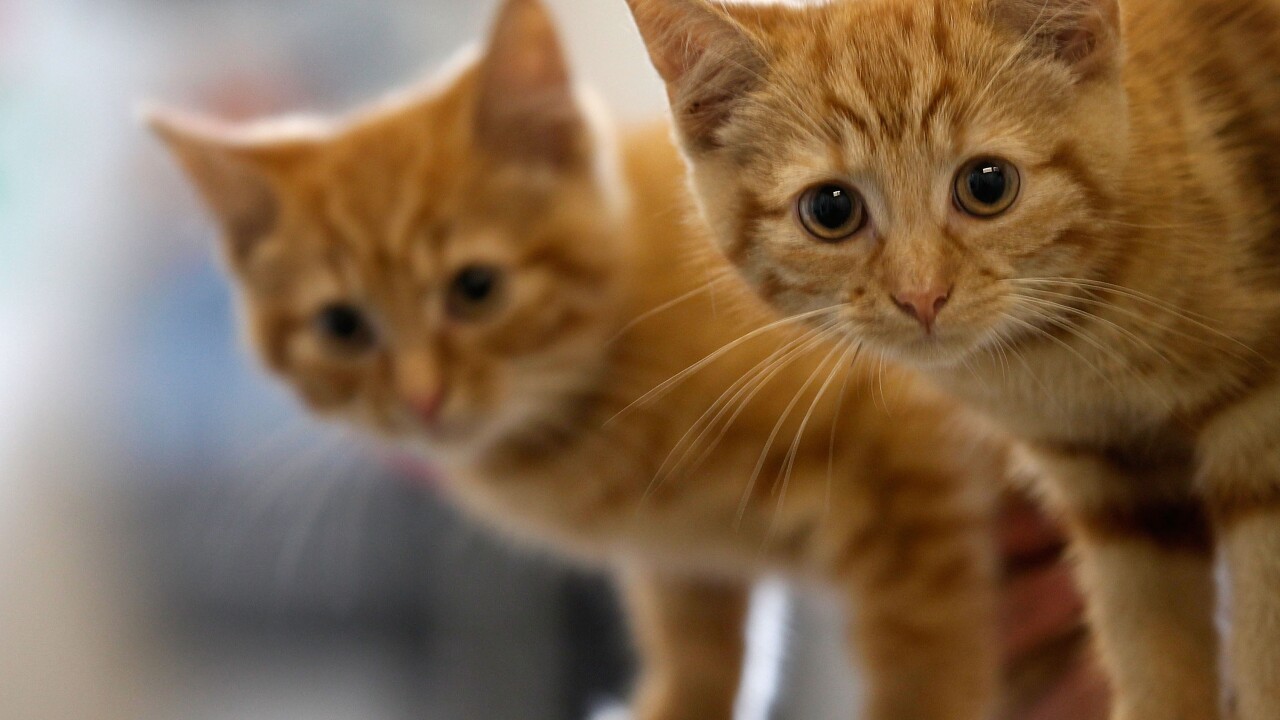 MANCHESTER, ENGLAND – JULY 27: Milly, a 13-week-old kitten waits with her brother Charlie (L) to be re-homed at The Society for Abandoned Animals Sanctuary in Sale, Manchester which is facing an urgent cash crisis and possible closure on July 27, 2010 in Manchester, England. The Society for Abandoned Animals exists entirely on public support and unless it can raise GBP 50,000 in the next couple of months it will have to close down. The registered charity started in 1967 and in the last five years alone the charity has rescued and found homes for more than 1,000 cats, 290 rabbits and 262 dogs. The rescue centre is one of the many who are suffering a downfall in donations due to the economic recession. (Photo by Christopher Furlong/Getty Images)

Democratic Sen. Jeff Merkley is joining forces with a Republican congressman to stop Agriculture Department researchers from euthanizing kittens used in their work.

Merkley told CNN he introduced on Wednesday a Senate version of the KITTEN Act — officially, the “Kittens in Traumatic Testing Ends Now Act of 2018.”

“The USDA breeds up to 100 kittens a year, feeds them parasite-infected meat in order to have the parasite’s eggs harvested for use in other experiments, and then kills the kittens,” Merkley said. “This bill would essentially stop this process.”

USDA’s Agricultural Research Service, which runs the testing, did not immediately respond to a request for comment on the legislation Wednesday afternoon. A spokesman told CNN in May the use of cats is “essential” to the research to combat a widespread parasite, and it “makes every effort to minimize the number of cats used,” calling the 100 figure a “serious over-estimation.”

The Agriculture Department says the cats aren’t put up for adoption because of the potential risks to adoptive families.

“Our goal is to reduce the spread of toxoplasmosis,” the USDA said in May. “Adopting laboratory cats could, unfortunately, undermine that goal, potentially causing severe infections, especially with unborn children or those with immunodeficiencies.”

A department spokesperson said Wednesday that USDA’s Agricultural Research Service does not take positions on legislation, and that it employs “the strictest adherence to ethical standards and rigorous implementation of best management practices.”

The testing is conducted at an Agriculture Department facility in Beltsville, Maryland, near Washington, according to the White Coat Waste Project, which opposes animal-based research and exposed the practice earlier this year.

The House version was introduced by Republican Rep. Mike Bishop, and now has 61 co-sponsors, including both Republicans and Democrats. Bishop lost his re-election bid last month.

Merkley said he hopes to make the effort bipartisan in the Senate, too, when members return in the new year, and may discuss the issue with Agriculture Secretary Sonny Perdue.

The legislation was introduced on one of the last legislative days of the year, as lawmakers and the White House are scrambling to fund several government departments and prevent a partial government shutdown.

Merkley said he has spoken with veterinarians who say the cats could be adopted, rather than euthanized, after the research. The cats can be treated for the parasite they are infected with and come out “very healthy.”

“There’s absolutely little cost and no reason not to treat them and adopt them out to American families,” he said.

But Merkley, who has a dog, says he will not be able to adopt any of the cats, should if they become available.

“My wife is allergic to cat hair,” Merkley said. “We’re going to stay a dog family, but I certainly empathize with the kittens.”