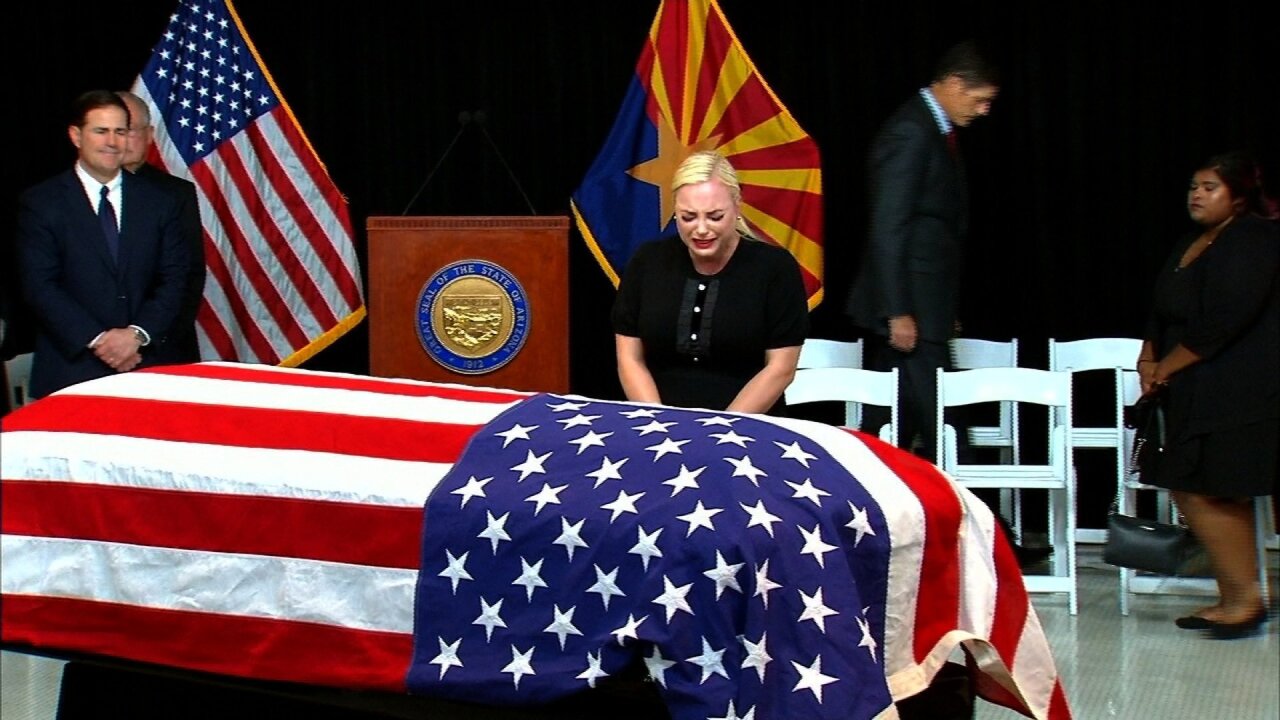 Meghan McCain approaches her father’s casket inside the Arizona Capital rotunda. She attended the funeral with her mother, Cindy McCain, and her two brothers, Jack and Jimmy.

Here are the stories our panel of top political reporters are talking about in this week’s “Inside Politics” forecast, where you get a glimpse of tomorrow’s headlines today.

A big piece of the establishment effort to sway Ducey played out Friday: a détente meeting between McSally and Cindy McCain, the late senator’s widow.

Mrs. McCain long has been disappointed in McSally, believing she was too quiet when President Donald Trump criticized Sen. McCain and then too willing to distance herself from McCain and his positions when she was a candidate this year for Arizona’s other Senate seat. McSally ultimately lost that race, and Mrs. McCain’s disappointment was an insurmountable obstacle when establishment forces trying to help McSally pitched the idea of a late campaign ad featuring Cindy McCain.

Several sources familiar with the GOP conversations in Arizona and Washington say the effort to broker peace, or at least détente, resumed after the election when interim Sen. Jon Kyl made clear he would serve only until the end of the year — meaning Ducey again needs to make an appointment.

Outright opposition from the McCain family would almost certainly doom any chance Ducey would name McSally. The governor is also said to have his own reservations because of her 2018 loss and is facing pressure from other GOP factions who have their own thoughts about who should be named to the seat.

But the influential Kyl is a McSally backer, as is Senate Majority Leader Mitch McConnell. Both view the congresswoman as the best fit for the Senate now and as a candidate in 2020. Both Kyl and McConnell — and their political teams — are part of the effort to bring Cindy McCain around.

Sen. McCain’s daughter Meghan remains no fan of McSally. On Friday she retweeted a post by her husband, a conservative writer, taking issue with the idea of naming McSally to the seat.

But the establishment forces believe Cindy McCain is the one with the most sway over Ducey, with whom she has a good relationship. Ducey was among those who encouraged McSally to meet with Mrs. McCain.

A wild card would be if Mrs. McCain herself had interest in the seat. She was adamant in saying no when her husband passed away last summer, and sources familiar with her thinking say there is no indication she has changed her mind.

But there could be a longer term play for the McCain family, and that has not been lost in the establishment efforts to broker the détente with McSally.

Arizona is likely to gain a House seat after the 2020 Census, and there is talk within the McCain family and its circle of close friends and advisers of the possibility that Sen. McCain’s son Jack might try to follow in his father’s footsteps after he leaves the military. John McCain served two terms in the House before his election to the Senate. A mostly unspoken but not hidden dynamic in the sensitive establishment maneuvering to help McSally is that a favor now could come in handy a few years down the road.

“The President seems to be in a mood for change lately,” Dawsey said. “He’s unhappy with Kirstjen Nielsen, his homeland security secretary. There’s frustration with [Commerce Secretary] Wilbur Ross too. So if you’ve been watching the carousel at the White House, I think you should expect more people to get off soon.”

The West Wing is getting a makeover too — starting with new chief of staff Mick Mulvaney, the current White House budget chief and a former congressman.

“Mulvaney might give him some expertise on Capitol Hill and management-wise, but he still does not appear to have what the President is looking for, which is someone who has the pulse of his MAGA base,” Phillip said.

That person was supposed to be Nick Ayers, a longtime political operative who insiders expected to get the chief of staff job. But then Ayers, who is currently Vice President Mike Pence’s chief of staff, turned it down.

“Now the President is suddenly low on political talent inside the White House,” Phillip said. “I think what we’ll see as we go forward is President Trump leaning heavily on people on the outside, who he has been talking to for many, many months now. His kitchen cabinet of outside advisers.”

Unless Trump strikes a deal with congressional Democrats, we’re just a few days away from a partial government shutdown.

The sticking point: whether the new budget should include any funding for Trump’s border wall. And New York Times reporter Julie Davis said no one’s sure what will happen next.

Making things even harder for the GOP: Dozens of Republican House members who are leaving Congress may be in no mood to help the President.

“One of the big uncertainties is will they have enough people here to vote. Once the President decides what he wants to do, will there be enough Republicans who have been defeated or are retiring who are willing to show up to cast those votes?” Davis asked. “Who is actually going to come back four days before Christmas to get this done?”

There will be just 13 Republican women in the House next year — and they’re telling their male colleagues that something must be done to fix the party’s problem with women, reports Politico’s Rachael Bade.

And GOP women on Capitol Hill don’t think the party is taking the problem seriously enough. One example, Bade said, is the treatment of Rep. Ann Wagner of Missouri. She planned to run for a leadership slot — National Republican Congressional Committee chair.

“She was getting ready to run to head the campaign arm next cycle, and Kevin McCarthy, the majority leader, called her and said he didn’t want her. He wanted one of the backbench members that he was close with. And it really infuriated the Republican women in the conference,” Bade said.