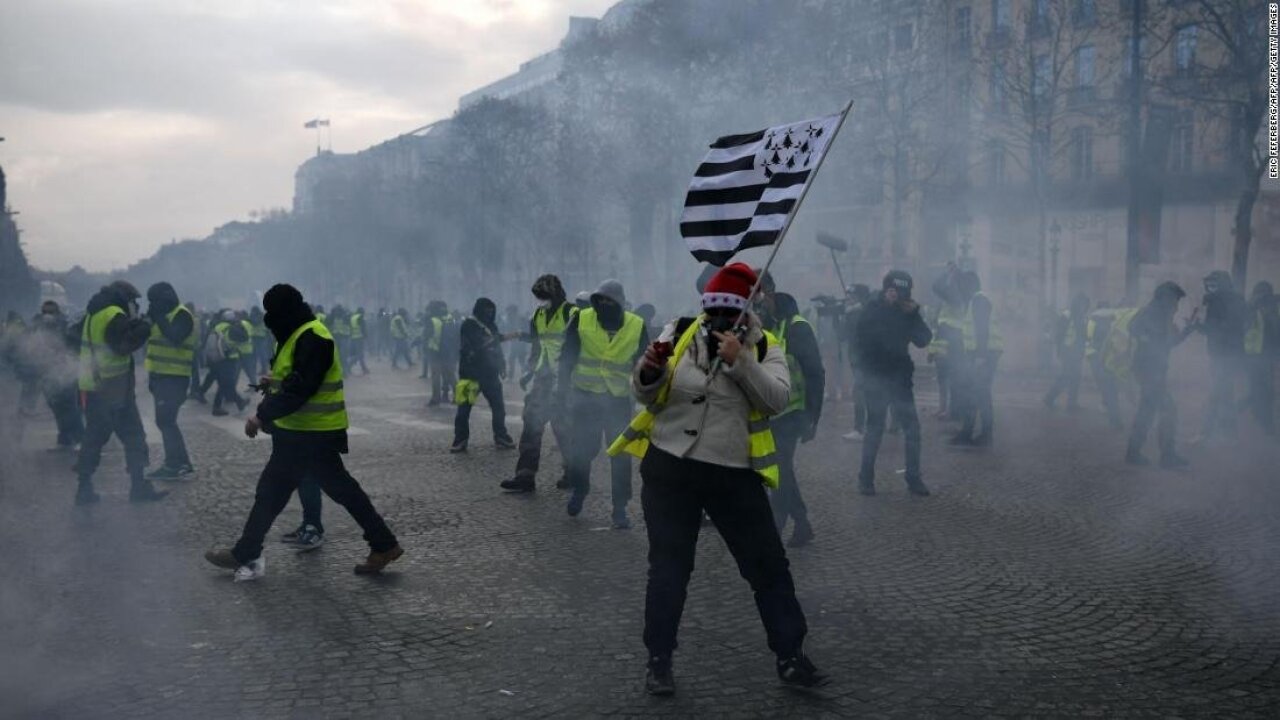 French police clashed Saturday in Paris with protesters staging a fourth weekend of “gilets jaunes,” or “yellow vest,” demonstrations against the government of President Emmanuel Macron.

Officers fired rubber bullets and hundreds of canisters of tear gas at the demonstrators, some of whom had set vehicles on fire.

According to a spokesman for the Interior Ministry, 1,723 people were taken in for questioning and 1,220 were taken into custody.

Two photographers from the newspaper Le Parisien were hit by projectiles. One was taken to hospital as dusk drew near in a city still in shock from last weekend’s riots — the worst to hit the French capital in decades.

One Parisian, teacher Francesca Testi, tweeted a video of protesters smashing up what appeared to be a cafe.

A French radio reporter, Boris Kharlamoff, tweeted a photo of his wounded torso after a rubber bullet hit him.

“A policeman shot at me with a rubber bullet even though my press arm band was showing,” he wrote. “It hurts but it’s all right. Colleagues be careful on the Champs-Élysées.”

Protesters could be heard calling for Macron’s resignation Saturday in Paris.

Macron will address the demonstrations Monday, according to the Élysée Palace.

Some 136,000 joined in Saturday’s protests across France, the interior minister said, with about 10,000 in Paris. The latter converged around midday on the Champs-Élysées, with many dressed in “gilets jaunes,” the yellow high-visibility jackets that have become the symbol of the movement.

Police used water cannons in a bid to disperse the crowd.

Tires were also set on fire. As protests turned violent toward the end of the day security forces deployed tear gas, rubber bullets and water cannons.

A smaller “yellow vest” demonstration of about 500 people also took place in the Belgian capital of Brussels near the European Parliament, according to the newspaper Le Soir.

Meanwhile, across the Atlantic, President Donald Trump claimed the protests, which started in reaction to an eco-tax on gas, underscored his decision not to sign the 2015 Paris Agreement on climate change.

“The Paris Agreement isn’t working out so well for Paris,” he tweeted. “Protests and riots all over France. People do not want to pay large sums of money, much to third world countries (that are questionably run), in order to maybe protect the environment. Chanting ‘We Want Trump!’ Love France.”

CNN reporters on the ground said the only time they heard Trump mentioned was as a joke when they were recording.

Earlier, TV images showed French protesters parading past the flagship stores of some of Paris’ best-known luxury brands such as Mont Blanc and Cartier, all with their shutters tightly fastened on what would usually be a busy shopping day before Christmas.

Anticipating a repeat of last weekend’s violence, monuments such as the Eiffel Tower and many of the city’s Metro stations remained closed, with about 8,000 police on the streets of Paris and tens of thousands more deployed across the country.

“We have to change the Republic,” Ilda, a yellow jacket protester from the south of France near Toulouse, told CNN. “People here are starving. Some people earn just 500 euros a month; you can’t afford to live. People don’t want to stop because we want the President to go.”

Patrice, a pensioner from Paris, said he was protesting because of “the government and the taxes and all these problems. We have to survive.”

With more unrest expected in other parts of France, Prime Minister Edouard Philippe said the government was deploying 89,000 security force members across the country.

Philippe said that “it’s time for dialogue” between politicians and representatives of the protesters.

The French retail sector has suffered a loss in revenue of about $1.1 billion since the beginning of the yellow vest protests last month, a spokeswoman for the French retail federation, Sophie Amoros, told CNN.

Amid heightened tensions, police seized 28 petrol bombs and three homemade explosive devices Friday at an area blockaded by protesters in Montauban in southern France, a spokesman for the Tarn-et-Garonne prefecture told CNN.

Dominique Moisi, a foreign policy expert at the Paris-based Institut Montaigne and a former Macron campaign adviser, told CNN the French presidency was not only in crisis but that Europe’s future also hung in the balance.

“In a few months from now, there will be European elections, and France was supposed to be the carrier of hope and European progress. What happens if it’s no longer? If the President is incapacitated to carry that message?” Moisi asked.

“It’s about the future of democracy, as well; illiberal democracies are rising all over the world. And if Macron fails, the future of France risks looking like the presidency of Italy today. And it’s much more serious because we have a centralized state, which plays a major role in the balance of power within Europe.

“But make no mistake, it is a French version of a much more global phenomenon.”

France’s far-left CGT movement has pledged support for the protests, which also are backed by the far-right leader Marine Le Pen.