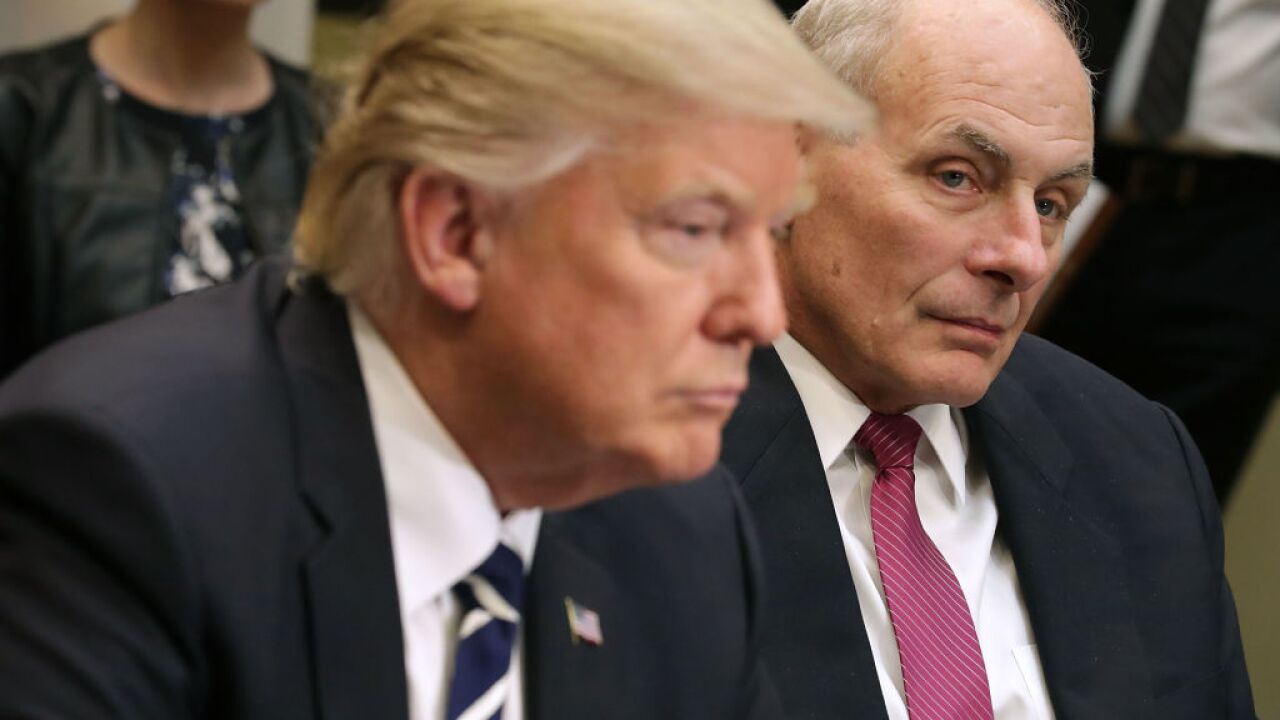 WASHINGTON, DC – JANUARY 31: Homeland Security Secretary John Kelly listens as U.S. President Donald Trump delivers remarks at the beginning of a meeting with government cyber security experts in the Roosevelt Room at the White House January 31, 2017 in Washington, DC. Citing the hack of computers at the Democratic National Committee by Russia, Trump said that the private and public sectors must do more to prevent and protect against cyber attacks. (Photo by Chip Somodevilla/Getty Images)

John Kelly is expected to resign as White House chief of staff in the coming days, two sources familiar with the situation unfolding in the West Wing tell CNN.

Seventeen months in, Kelly and President Donald Trump have reached a stalemate in their relationship and it is no longer seen as tenable by either party. Though Trump asked Kelly over the summer to stay on as chief of staff for two more years, the two have stopped speaking in recent days.

WASHINGTON, DC – JANUARY 31: Homeland Security Secretary John Kelly listens as U.S. President Donald Trump delivers remarks at the beginning of a meeting with government cyber security experts in the Roosevelt Room at the White House January 31, 2017 in Washington, DC. Citing the hack of computers at the Democratic National Committee by Russia, Trump said that the private and public sectors must do more to prevent and protect against cyber attacks. (Photo by Chip Somodevilla/Getty Images)

Trump is actively discussing a replacement plan, though a person involved in the process said nothing is final right now and ultimately nothing is final until Trump announces it. Potential replacements include Nick Ayers, Vice President Mike Pence’s chief of staff, who is still seen as a leading contender.

Kelly has been on the verge of resigning or being fired before, only to bounce back every time. But aides feel the relationship can’t be salvaged this time. Trump is becoming increasingly concerned about Democrats taking over the House in January, and has privately said he needs someone else to help shape the last two years of his first term, which he predicts will be politically focused. He has complained repeatedly that Kelly is not politically savvy.

The expected departure would end a tumultuous tenure for Kelly, who was brought on to bring order to the White House but whose time as chief of staff has often been marked by the same infighting and controversy that has largely defined Trump’s presidency from its beginning. Many of the storms in which Kelly became embroiled were by his own making.

CNN reported last month that Trump was considering potential replacements for several senior positions in his administration as part of a post-midterms staff shakeup.

News of Kelly’s imminent departure was first reported by Axios.

Once seen as stabilizing force

When Kelly first replaced Reince Priebus as chief of staff last summer, he ruled with an iron fist. He curbed Oval Office access, blocked certain outsiders from being able to call the White House switchboard and had broad authority over staffing.

But in the last months, Kelly has seen his status as chief of staff diminish. Trump began circumventing many of the policies and protocols he enacted, and he was on the verge of being fired or resigning numerous times.

Trump often vacillated between criticizing and praising Kelly, sometimes within minutes of each other. Kelly started holding increasingly fewer senior staff meetings — once daily occurrences were whittled down to weekly gatherings — and began to exert less control over who talks to the President.

White House officials believed Kelly was close to resigning after he got into a heated shouting match with national security adviser John Bolton in October. Bolton had criticized Homeland Security Secretary Kirstjen Nielsen during a discussion about the border, and Kelly stormed out of the West Wing after their profanity-laced argument.

Kelly’s tenure working for Trump was pocked with controversies, and officials were often amazed at how he managed to survive. Weeks after taking over for Priebus, his predecessor who was unceremoniously fired over Twitter while he sat on a rainy tarmac, Kelly was faced with Trump’s controversial response to the racially charged protests in Charlottesville, Virginia. He was photographed looking grim-faced in the lobby of Trump Tower as the President declared there were “good people” on both sides of the racist violence.

At times, Kelly was the source of his own downfall. He insulted Rep. Frederica Wilson, D-Florida, using inaccurate information, later declaring he would “never” apologize. He said some of those eligible for protections under the Deferred Action for Childhood Arrivals were “lazy.”

But perhaps most damaging was his handling of the situation involving former staff secretary Rob Porter, who was accused by two of his ex-wives of abuse. Kelly’s shifting accounts caused his credibility inside the West Wing to plummet, and it never truly recovered, according to officials. Kelly’s highly criticized handling of the Porter controversy was an inflection point in his tenure, and some of his internal relationships became strained in the months that followed the former staff secretary’s ouster.