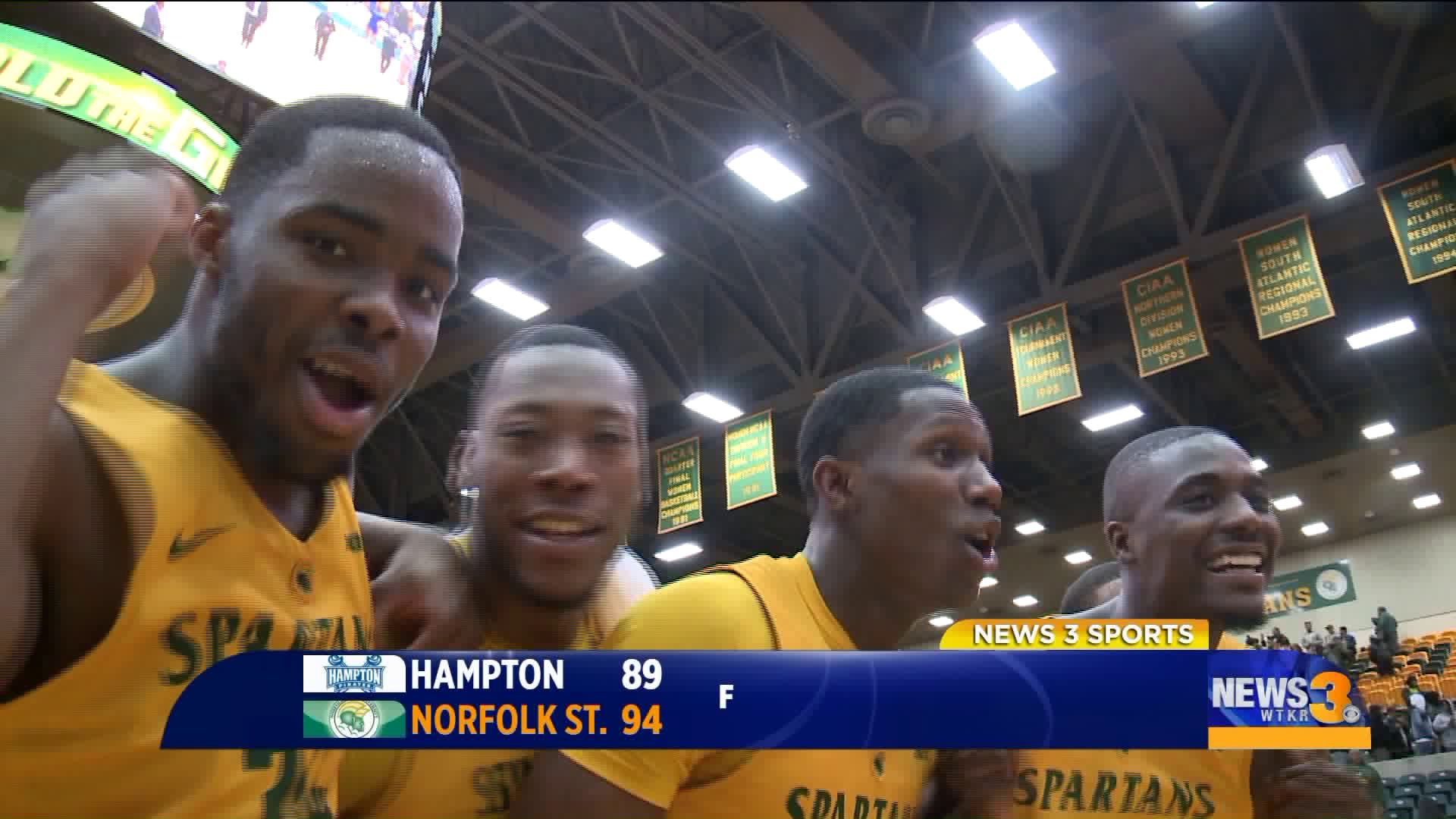 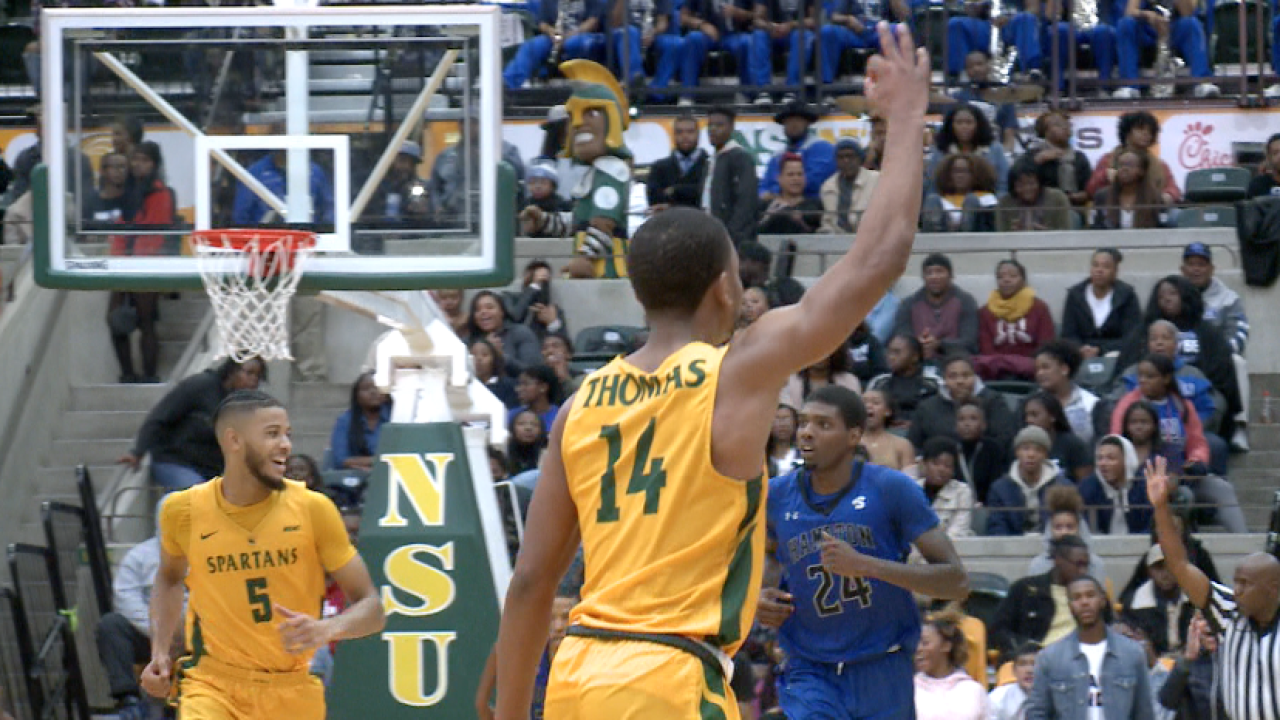 NORFOLK, Va. (NSU Athletics) - In one of the wildest Battle of the Bays ever, Norfolk State survived double overtime to defeat Hampton by a 94-89 score in men’s basketball action on Thursday night in the Battle of the Bay at Joseph Echols Hall.

Hampton tied the game late in regulation, and then again when less than 20 seconds to go in the first overtime. In a contest that featured 10 lead changes, NSU led most of the second extra period and held off the Pirates in the end.

In 134 all-time meetings, the two teams went to two overtimes for just the second time ever and the first since 1995.

The Spartans led most of the first half, including by as much as 15. They still were up by 10 at halftime before the Pirates began the second half with a big run to jump ahead. Hampton, which ultimately fell to 2-5, later erased a seven-point deficit in the last minute and a half to send the game to OT.

Thursday marked the only meeting between the two programs this year after Hampton left for the Big South Conference before the season. The game did not count toward conference records.

NSU improved to 4-5 despite having three players foul out. That included senior Jordan Butler, who kept NSU ahead by making eight straight free throws in the last six minutes of regulation. He finished with 17 points, nine rebounds and five assists, making a career-best 13-of-14 from the foul line.

The Spartans shot 33-of-40 for the game, a nearly 83 percent clip from the line.

But with Butler out for all of overtime, and with senior Alex Long picking up his fifth foul in the first OT, the Spartans turned to juniors Nic Thomas and Steven Whitley.

Each hit the 20-point plateau for the game, and they combined for 18 points in overtime. Thomas nearly gave the Spartans the win after making two straight with 33.9 seconds left in the first extra session. That put NSU up 78-77, but Hampton’s Kalin Fisher sank 1-of-2 from the line with 16.7 seconds to go to tie it up.

The Spartans missed their final attempt to send the game to the second OT. There, Whitley drained a 3-pointer at the 3:44 mark to put the Spartans ahead for good. He later made a layup to keep the Spartans ahead, while sophomore Mastadi Pitt twice made two straight from the charity stripe.

Thomas provided the big boost, draining a 3-pointer from several feet beyond the right wing with 42 seconds left to give the Spartans a 90-86 lead. After HU’s Greg Heckstall completed a 3-point play, Thomas and Pitt each made 2-of-2 from the line to seal the win.

Thomas finished with a career-high 25 points, shooting 7-of-17 overall and 7-of-8 from the foul line with six rebounds and two assists. Whitley shot the exact same from the floor, and 5-of-6 from the line, with nine rebounds and two steals.

Pitt also scored in double figures with 17 points, thanks in part to an 8-of-10 effort from the charity stripe as well.

The Spartans only trailed one time in the first half, and it was before Thomas made a pair of treys during an 11-2 run for the Spartans. That pushed their lead to 17-10, and NSU later scored 11 in a row for a 15-point edge, 28-13, with 7:05 to go. Pitt also made a 3-pointer during that time while finishing with 12 points in the half. That included six of the team’s last eight points.

The Pirates got to within eight, but NSU went into the half up 40-30 after holding HU to 27 percent shooting in the first 20 minutes. The Spartans, though, made just 30 percent in the next 20 minutes, and the early part of the second half belonged to Hampton.

After Norfolk State scored the first two points of the second half, Hampton went on a 20-4 run that covered six minutes on the clock. That gave HU a 50-46 edge, but NSU got it back thanks to free throws from Whitley and Butler. In fact, Butler made all six during a 9-0 run that put the Spartans ahead by seven, 65-58.

Thomas capped it with a 3-ball with 3:57 left, but Hampton clawed back. Heckstall’s trey with 1:22 to go was later followed by three free throws from Lysander Bracey with 48.1 on the clock. Bracey then drained a 3-pointer with 20 seconds left to tie the game at 69-69.

Hampton won a jump ball on the other end, but Fisher’s last second shot in traffic in the lane was blocked to send the game to an extra period.

The Spartans held Hampton to 34 percent shooting on the night (26-of-77), including 10-of-34 from deep. They did outscore the Pirates 16-5 in fastbreak points.

NSU made 40 percent (27-of-68) but just 7-of-24 from deep. Long added eight points and three blocks. Senior Armani Branch grabbed eight rebounds, although the teams finished deadlocked on the glass at 48-all.

NSU will head to the state of Ohio on Saturday for a 4 p.m. contest at Kent State.?