Jeep will make its first pickup in 26 years 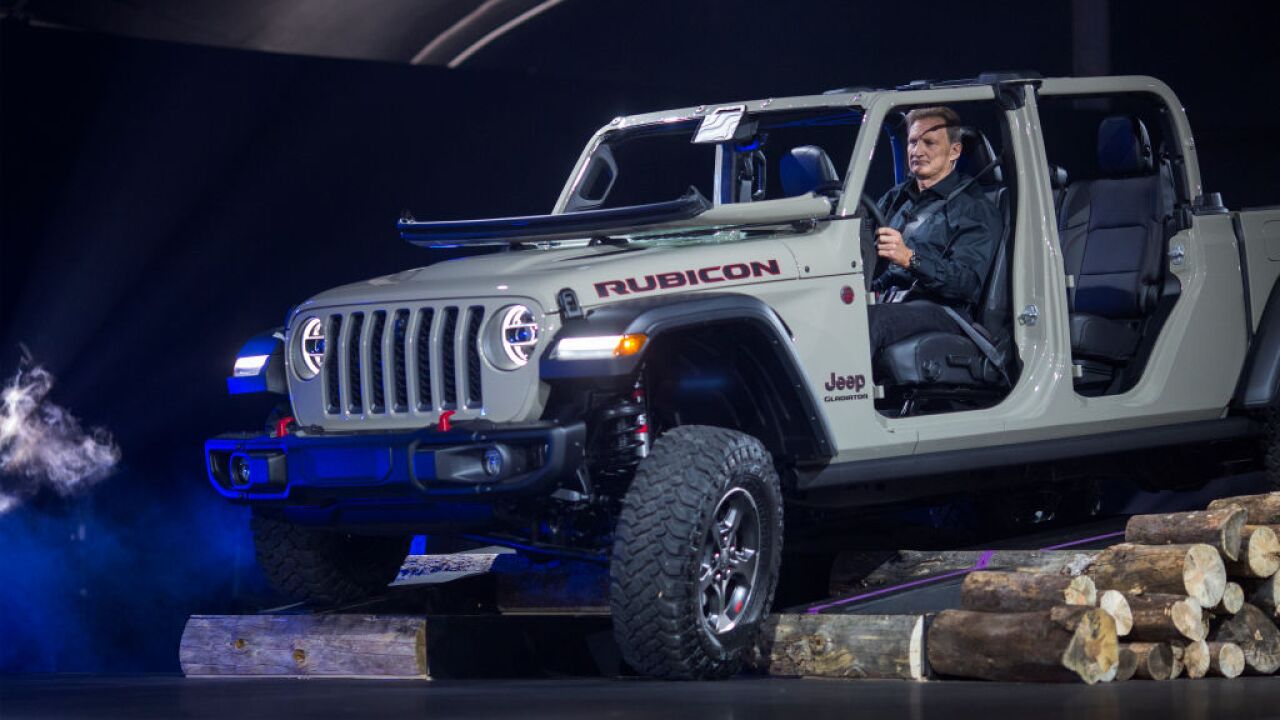 LOS ANGELES, CA – NOVEMBER 28: The new Jeep Gladiator truck is shown during the auto trade show, AutoMobility LA, at the Los Angeles Convention Center on November 28, 2018 in Los Angeles, California. More than 50 vehicles will debut during AutoMobility LA, which precedes the LA Auto Show, open to the public December 1 through 10. (Photo by David McNew/Getty Images)

The Jeep Gladiator rolled onto a stage at the Los Angeles Auto Show Wednesday. Essentially a Wrangler with a pickup truck bed, it’s a product Jeep fans have long been waiting for.

LOS ANGELES, CA – NOVEMBER 28: The new Jeep Gladiator truck is shown during the auto trade show, AutoMobility LA, at the Los Angeles Convention Center on November 28, 2018 in Los Angeles, California. More than 50 vehicles will debut during AutoMobility LA, which precedes the LA Auto Show, open to the public December 1 through 10. (Photo by David McNew/Getty Images)

Jeep’s last pickup, the Comanche, went out of production in 1992. Now, the Gladiator will face off against a lot of fresh competition in the mid-sized pickup market. Trucks like the Ford Ranger, Chevrolet Colorado and long-time market favorite, the Toyota Tacoma, are designed to appeal to buyers looking for something more fun and efficient than a massive full-size pickup.

But the Gladiator will also appeal to those who simply want a Jeep Wrangler with a bed. Executives at Fiat Chrysler Automobiles, Jeep’s parent company, say it’s one of the questions they are most commonly asked.

“When are we going to get a Wrangler pickup?”

The Wrangler, designed for serious off-road driving, is already engineered like a truck rather than like a tall car, as most SUVs are these days. That made adding a bed to the back a relatively natural idea.

The Wrangler is also the only four-door convertible on the market. That means the Gladiator will be a convertible pickup, a truly unique selling point. It will be available with a cloth top or removable hard top. The windshield also folds down, as it does on the Wrangler, for a complete open-air feel.

For difficult off-road terrain, the Gladiator will have an optional forward-facing camera enabling the driver to see obstructions just ahead on the trail. The truck will also be able to drive through two and a half feet of water.

With its four doors, and a five-foot bed, the Gladiator is 31 inches longer than a four-door Wrangler. It can carry up to 1,600 pounds or tow 7,650 pounds. Buyers will be able to choose a 3.6-liter gasoline-powered V6 or a 3.0-liter diesel V6 engine.

Besides the bed, there are some subtle design changes to meet the special demands of a truck. The openings in the famous seven-slot grill are slightly wider, allowing more air to reach the engine for improved towing capacity. The top of the grill is also slightly swept back for better aerodynamics. The tailgate is capable of being lowered to three different positions. The bed can be illuminated with light coming from under the side rails. It will also have covered external power outlets.

The Gladiator will be built in Toledo, Ohio, where the Wrangler is made. Production will begin in the first half of 2019. Pricing will be announced closer to that time.