USS Ronald Reagan in Hong Kong. Are US tensions easing with China? 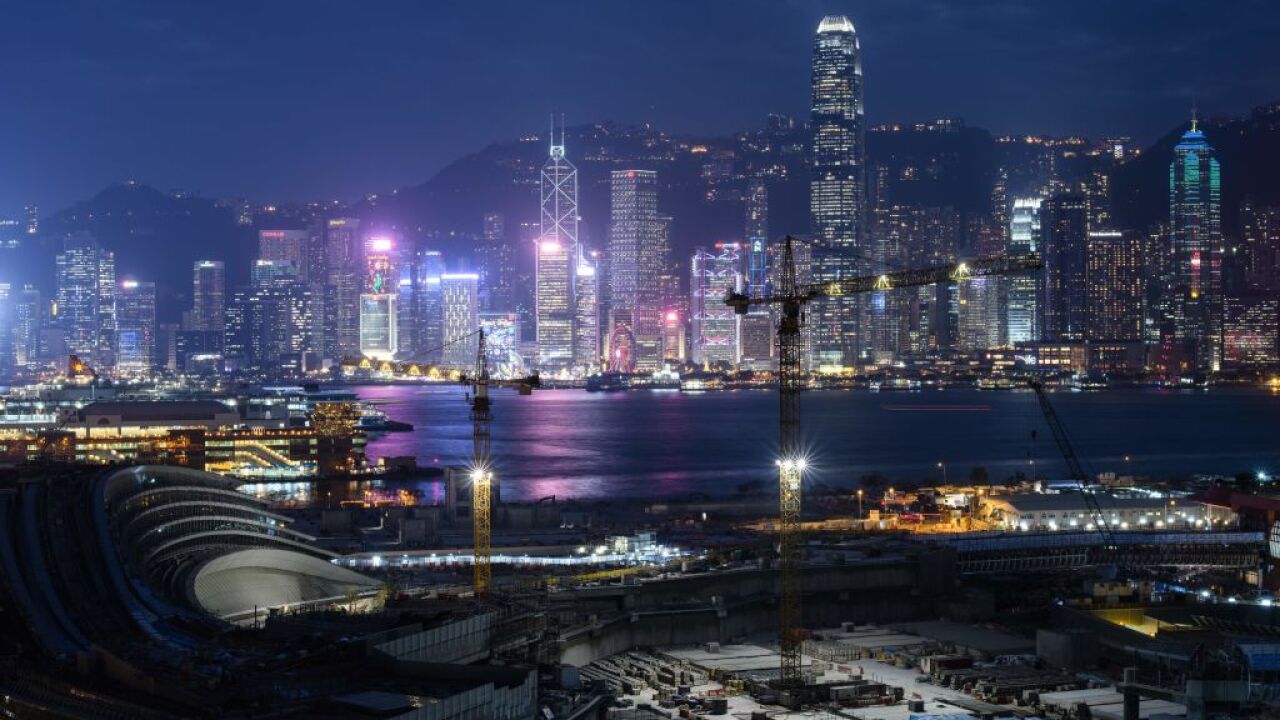 TOPSHOT – A long exposure general view shows the construction site (foreground) of the West Kowloon terminus of the high-speed rail link which will connect the city to the southern Chinese city of Guangzhou, as Hong Kong’s skyline looms in the background on December 27, 2017. China’s top legislative body decreed on December 27 that Chinese officials could enforce mainland law in part of a new railway station in Hong Kong, despite protests that this would erode the city’s autonomy. / AFP PHOTO / Anthony WALLACE (Photo credit should read ANTHONY WALLACE/AFP/Getty Images)

A US Navy aircraft carrier strike group steamed into Hong Kong on Wednesday, less than two months after China denied a similar visit by a US warship.

The decision by authorities in Beijing to allow the US Navy to dock in the semi-autonomous Chinese city has been interpreted as an effort to ease tensions ahead of next week’s G-20 summit in Argentina, during which Chinese President Xi Jinping and US President Donald Trump are expected to meet.

The visit comes just two days after the US Air Force flew B-52 bombers in the vicinity of the South China Sea, where China has built military fortifications on contested islands.

And less than two months ago, tensions spiked after US and Chinese destroyers came within 45 yards of each other while the US ship, the USS Decatur, was performing a “freedom of navigation” operation near Chinese-claimed islands in the South China Sea. US officials called the Chinese ship’s actions “unsafe.”

Adm. Phil Davidson, the head of the US Indo-Pacific Command, said in speech Saturday that China was using a campaign of military intimidation in the South China Sea.

“They’re now violating the sovereignty of every other nation’s ability to fly, sail, and operate in accordance with international law,” Davidson told the Halifax International Security Forum in Nova Scotia.

Against such a backdrop, Wednesday’s move is likely to be interpreted as a goodwill gesture ahead of next week’s international summit.

The upcoming Argentina meeting is the only scheduled opportunity for a direct tête-à-tête between Trump and Xi, though the two leaders exchanged direct visits in 2017 — with Trump welcoming Xi at his Mar-a-Lago resort in Florida.

Top White House economic adviser Larry Kudlow said Tuesday that he anticipates a direct confrontation between the US and China over trade at the G-20.

However, optimism has been growing in recent weeks that US and Chinese negotiators could reach some kind of a deal beforehand.

During the Asia-Pacific Economic Cooperation conference in Papua New Guinea last week, Xi spoke of the need for global cooperation and international trade and said there was no issue that countries couldn’t work out “through consultation.”

The presence of four US warships in Hong Kong will bring about 7,000 US military personnel to the Chinese territory.

US officials confirmed that Chinese Lt. Gen Tan Benhong, commander-in-chief of the People’s Liberation Army Hong Kong Garrison, visited the ship Tuesday, as part of a small group of visitors invited by the US Consulate General.

The US warships come to Hong Kong after a week of exercises with the USS John C. Stennis aircraft carrier strike group in the Philippine Sea.

Two of the US ships, the Benfold and the Curtis Wilbur, have figured in US-China military tensions over past few years.

In July, the Benfold joined the destoryer USS Mustin in passing through the Taiwan Strait. Beijing is perceived as sensitive to US military vessels traveling through the strait and continues to lay claim to Taiwan, a self-governed, democratic island, which it views as a breakaway province.

The Curtis Wilbur made the same Taiwan Strait passage in October. And in 2016, the destroyer performed a freedom of navigation operation near Triton Island in the South China Sea.