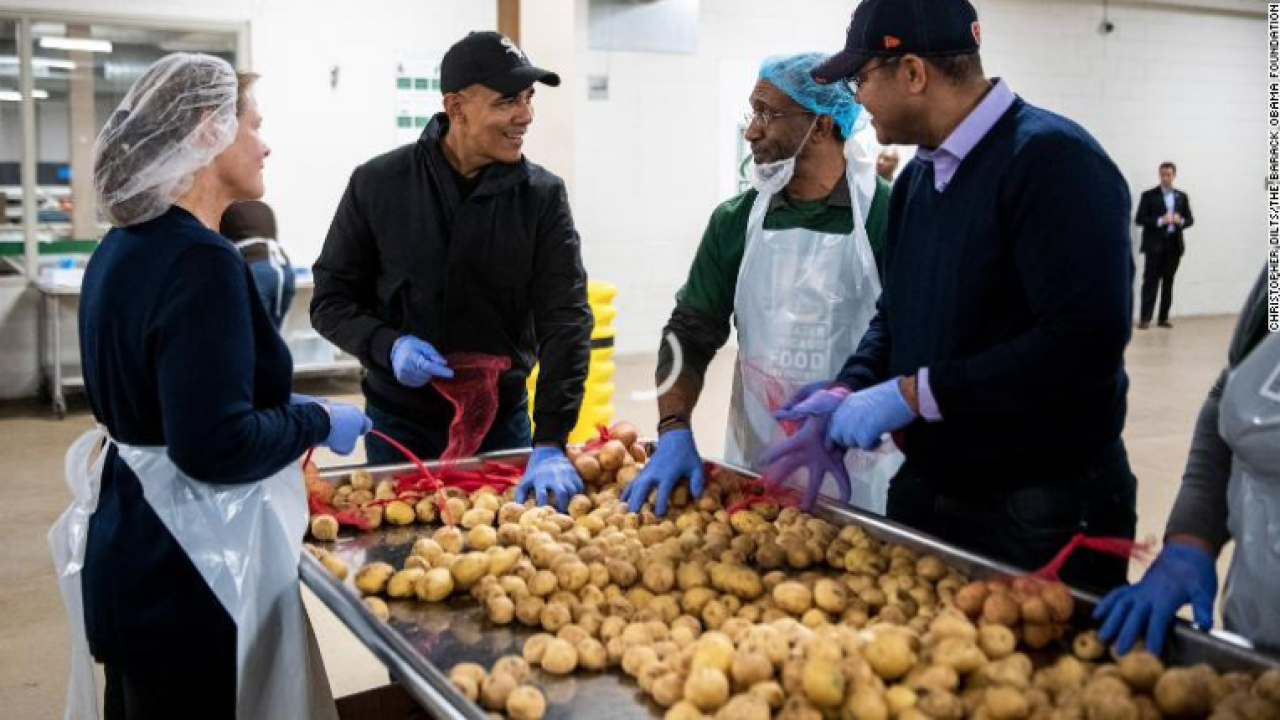 Volunteers at a Chicago food bank got a surprise treat for the holidays.

Wearing a Chicago White Sox hat, Obama arrived with bags of donated food and donned latex gloves to work side by side with volunteers at the nonprofit, which helps provide meals to more than 700 food pantries and shelters across Cook County, Illinois.

The former President and longtime Chicago resident came with staffers from the Obama Foundation, which seeks to improve communities across the US through leadership training and other educational efforts.

“Hey, how’s it going?” he asked volunteers as he walked in. “This is a spiffy-looking spot right here.”

“We believe no one should go hungry, especially this time of year, and that’s why we’re working to address the root causes of hunger in Chicago and Cook County,” the food bank tweeted out Tuesday, along with a video of the surprise visit.

Thank you to ⁦@BarackObama⁩ and ⁦@ObamaFoundation⁩ for joining our volunteers today at the Food Depository. We believe no one should go hungry, especially this time of year, and that’s why we’re working to address the root causes of hunger in Chicago and Cook County. pic.twitter.com/d6YfBjvJl2

In the video, Obama encounters two little girls who are volunteering and tells them, “You guys are doing such a great job helping out. I’m really proud of you.”

Obama still lives in Washington but was in Chicago to attend the Obama Foundation Summit, a gathering of community leaders and students.

A hallmark of Obama’s presidency was combating hunger across the globe. In 2009, his administration pledged $3.5 billion over three years to a Feed the Future initiative, which works to promote agricultural knowledge and tools in areas with high food insecurity. In 2016, he signed the Global Food Security Act to bolster government efforts toward Feed the Future initiatives.

This was not the first time Obama has volunteered during the Thanksgiving holiday. He and his family spent the day before Thanksgiving in 2015 serving dinner to homeless people and veterans at Friendship Place Homeless Center in Washington.

Back then, Obama said it wasn’t only “of the spirit of giving during this holiday season but our national obligation to make sure all those who serve and sacrifice for our country have a place to call home.”