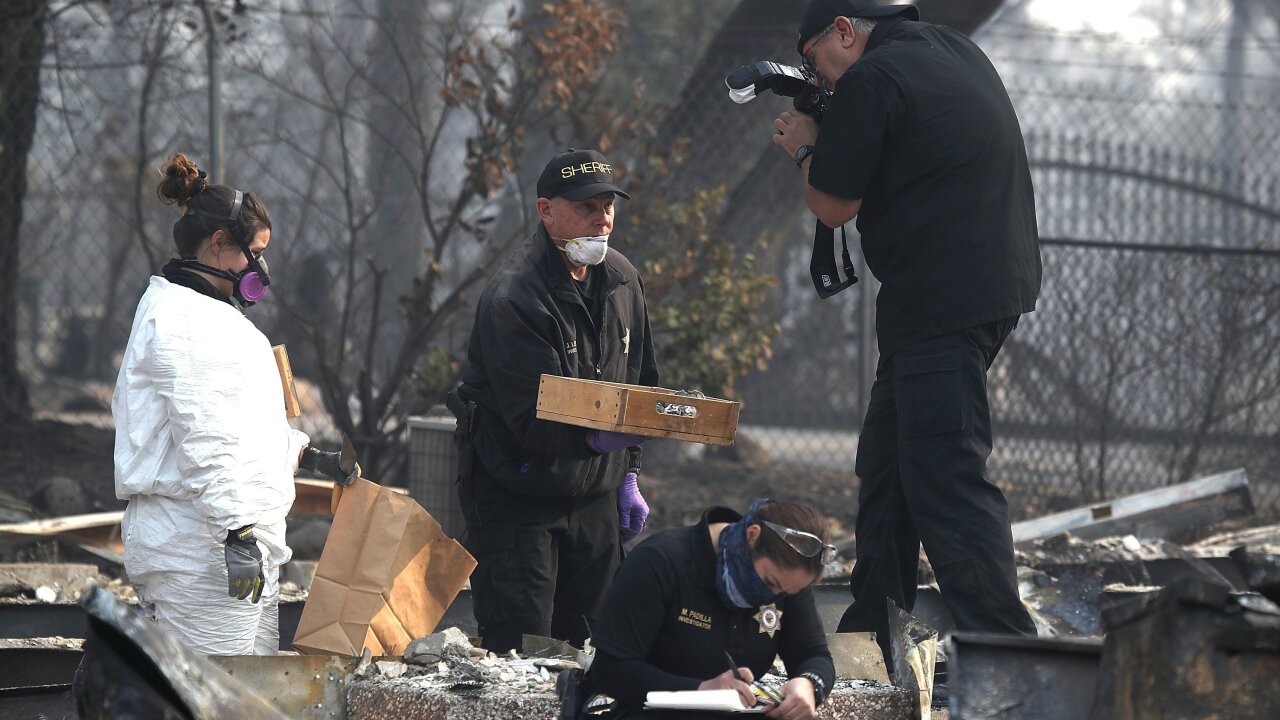 A sheriff deputy photographs a tray with human remains that were recovered from a home that was destroyed by the Camp Fire on November 16, 2018 in Paradise, California.

While hundreds of families wait in agony to learn the fate of missing loved ones, officials gave a gut-wrenching forecast on the fate of California’s Camp Fire:

It’s not even halfway done burning yet.

Since the Camp Fire erupted 10 days ago in Butte County, it has killed 76 people, destroyed more than 9,700 homes and torched an area the size of Chicago.

A sheriff deputy photographs a tray with human remains that were recovered from a home that was destroyed by the Camp Fire on November 16, 2018 in Paradise, California.

But the blaze probably won’t be fully contained until November 30, according to Cal Fire, the state’s forestry and fire protection agency.

“It is overwhelming, I don’t have any word to describe it,” Butte County Sheriff and Coroner Kory Honea said. “This is unprecedented. No one has had to deal with this magnitude that caused so much destruction and regrettably so much death.”

Meanwhile, displaced residents are in limbo. Many are in Chico, Butte County’s most populous city, about 15 miles from ground zero of the disaster, the town of Paradise.

Some evacuees are staying with friends and family. Others are in a tent city in a Walmart parking lot. On Sunday, those seeking a place to grieve trickled into the First Christian Church of Chico for a candlelight vigil.

A sign in the church set an intention for the hourslong open memorial: “We will rise from the ashes.”

The Camp Fire is already the deadliest and most destructive wildfire in California history. And with more than 1,200 people still unaccounted for, officials fear the death toll could keep rising.

Crews are combing the remnants of houses where all evidence of life has been wiped out by flames. Many of the searchers have lost their own homes and are looking for the remains of their neighbors.

While the search for the dead and missing continues, thousands of firefighters are trying to control the blaze. As of Sunday morning, the Camp Fire had seared 149,500 acres and was 60% contained.

‘People don’t know that we’re looking for them’

Though the number of people missing from the Camp Fire has skyrocketed, it’s hard to tell exactly how many are lost and how many may be safe elsewhere, officials said.

“That is raw data we’re collecting from phone calls, emails and the 911 system,” Honea said. “It’s not perfect data, but our thought process is that it’s better to get that information out to help start getting people accounted for. So rather than wait for perfection, we’re trying to get some progress going.”

Hundreds of deputies, National Guard troops, coroners and anthropologists are sifting through leveled homes and mangled cars for remains.

Butte County is maintaining a list of people reported missing from the Camp Fire. Honea urged anyone who sees their own name or the name of a loved one found safe to contact the sheriff’s office.

‘We’re not the only family that’s going through this’

Sadia Quint has no idea what happened to her uncle, David William Marbury, who lived in a house in the largely obliterated town of Paradise.

“We already know that his house has been burned down and his car was in his garage,” Quint said. “So now we’re just waiting for the sheriff’s department to go out there and let us know if his body’s in there or not.”

“We’re being patient just because we know we’re not the only family that’s going through this right now,” Quint said. “So everyone’s kind of in it together and everyone’s being really supportive.”

But as the hours pass with no news on her uncle, Quint said she’s prepared for the worst.

“He had respiratory issues and he had back problems,” Quint said. “It’s hard to think about him not being here anymore. But as a family, we have accepted whether we get good or bad news. So we’re just prepared for both.”

Related: Due to wildfires, California now has the most polluted cities in the world

As a Butte County search-and-rescue team captain, Newman was originally tasked with going door to door to alert people in the community of Concow to the fire.

The mission quickly shifted to Paradise, about a 20-mile drive away, where a hospital was in dire trouble.

“When we arrived at the hospital there were already flames,” he said. “And all of a sudden the urgency just skyrocketed.”

Newman’s team went around to the ER entrance and threw four patients in its truck.

The road that went by the hospital was swamped with cars and accidents. Drivers used every bit of open space they could to escape, racing through ditches and front yards, Newman said.

The fire was moving faster than any vehicle could, he said.

“We had homes on fire on each side,” he said.

Newman’s team managed to get out, but another team couldn’t and ended up back at the hospital.

Across the state, the deadly Woolsey Fire is still wreaking havoc in Southern California.

At least three people have been killed and more than 96,000 acres have been torched by the Woolsey Fire, Cal Fire said.

But a few bits of good news emerged Sunday. The Woolsey Fire is now 88% contained, and all of Ventura County is now open — meaning more residents can return and try to start rebuilding their lives.