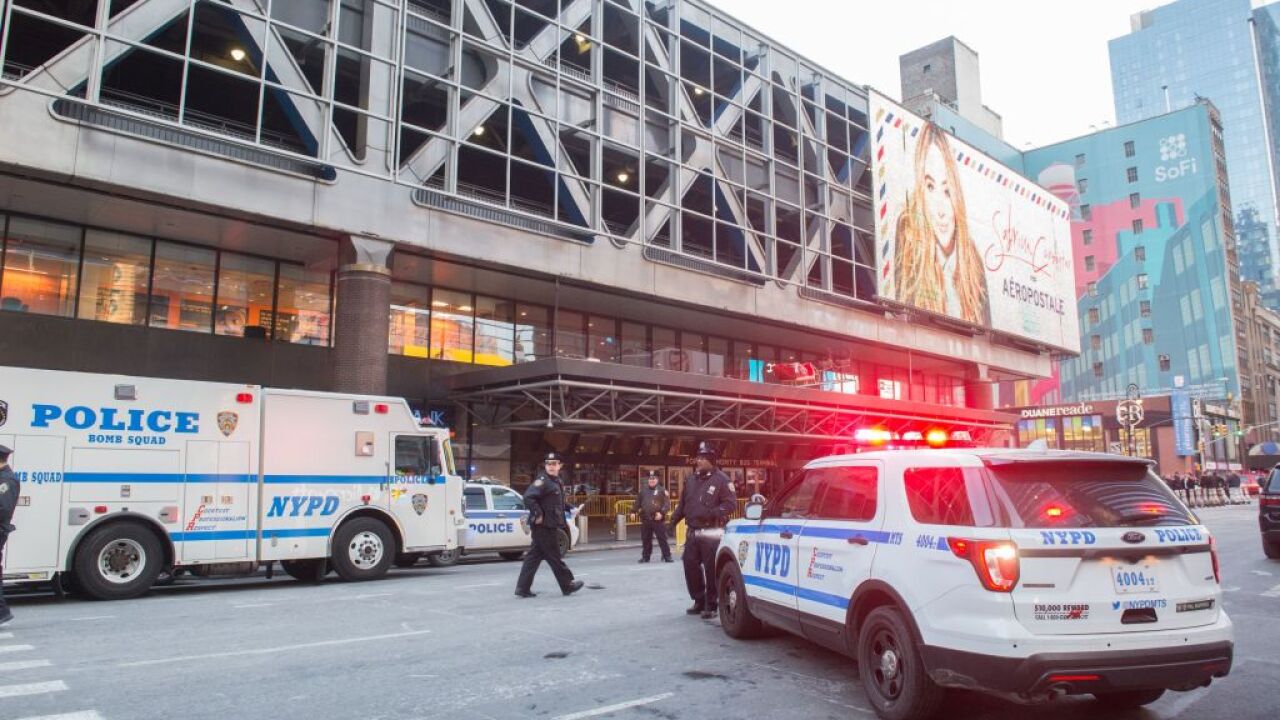 Police and other first responders respond to a reported explosion at the Port Authority Bus Terminal on December 11, 2017 in New York. New York police said Monday that they were investigating an explosion of “unknown origin” in busy downtown Manhattan, and that people were being evacuated. Media reports said at least one person had been detained after the blast near the Port Authority transit terminal, close to Times Square.Early media reports said the blast came from a pipe bomb, and that several people were injured. / AFP PHOTO / Bryan R. Smith (Photo credit should read BRYAN R. SMITH/AFP/Getty Images)

The man suspected of sending 14 pipe bombs to prominent Democrats around the country will be formally charged in court Monday.

Cesar Sayoc, 56, of Aventura, Florida, is facing federal charges and could receive up to 48 years in prison if convicted.

As of Friday, authorities had intercepted 14 packages Sayoc sent through the US mail system, officials said. None of the devices detonated, and no one was injured.

Sayoc is expected to stand trial on five federal crimes: interstate transportation of an explosive, illegal mailing of explosives, threats against former Presidents and other persons, threatening interstate communications and assaulting current and former federal officers.

Sayoc will appear in the federal district court for the Southern District of Florida at 2 p.m. ET Monday, where a federal magistrate judge is expected to formally advise him of the charges against him, read him his rights and appoint counsel if necessary.

The magistrate judge will also set or deny initial bail.

Sayoc told investigators after he was arrested in Plantation, Florida that the pipe bombs wouldn’t have hurt anyone, and that he didn’t want to hurt anyone, according to a law enforcement official.

But federal authorities say the bombs Sayoc allegedly sent were real and a danger to their recipients.

Sayoc was being held Friday night at a federal detention center in Miami. It appears that he had been living in the white Dodge van where he was found and arrested Friday morning, the law enforcement official said.

Investigators believe that Sayoc made the pipe bombs in the van, two law enforcement sources said. Inside the vehicle were soldering equipment, stamps, envelopes, paper, a printer and powder, the sources said.

Hours before his arrest, Sayoc was playing music sets at a Florida strip club where he had worked for two months.

The bodybuilder had previously worked as a male dancer for several years and more recently as a pizza driver.

On his LinkedIn account, Sayoc described himself as a choreographer and booking agent for male strippers and burlesque shows.

Sayoc’s past is marked by encounters with law enforcement.

Court records show he had been arrested at least nine times, mostly in Florida, for accusations of grand theft, battery, fraud, drug possession and probation violations.

In 2002, he was arrested after Miami police said he threatened to bomb a power company, saying “it would be worse than September 11th.”

“The defendant contacted a rep (from) Florida Power and Light Co. … by telephone and threatened to blow up FPL,” a Miami Police Department report about the incident said.

The caller “threatened to blow up the building if FP&L turned off his light,” the report said.

He pleaded guilty to the offense, records show, and was sentenced to one year of probation.

In 2014, he was arrested and later pleaded guilty to stealing copper pipes at a Home Depot, records show.

In 2016, Sayoc registered to vote as a Republican in Florida, and a Facebook video showed him in a “Make America Great Again” hat at a Trump rally.

He took on Tallahassee Mayor Andrew Gillum, the Democratic nominee in the Florida governor’s race, more than 80 times in October alone.

On September 20, in response to a Trump tweet, Sayoc posted a self-shot video of himself at what appears to be a Trump rally.

The text of the tweet threatened former Vice President Joe Biden and Holder, both of whom were targeted by improvised explosive devices discovered last week.

“Go Trump Trump Trump hey Joseph Robinette Biden Jr. And Eric Himpton Holder Sr. Stick your BS all crap you talk where sun doesn’t shine . We will meet your threats right to your face soon.Not option we will see you soon .Hug loved ones real close we aren’t ones,” the tweet read.

Sayoc also posted virulently anti-Muslim memes and published the address of billionaire investor and Democratic donor George Soros, and photos of the homes of some others who later received bombs.

As recently as Wednesday, Sayoc posted a tweet that was critical of Soros, Obama and others. A package to Soros had been recovered two days earlier.