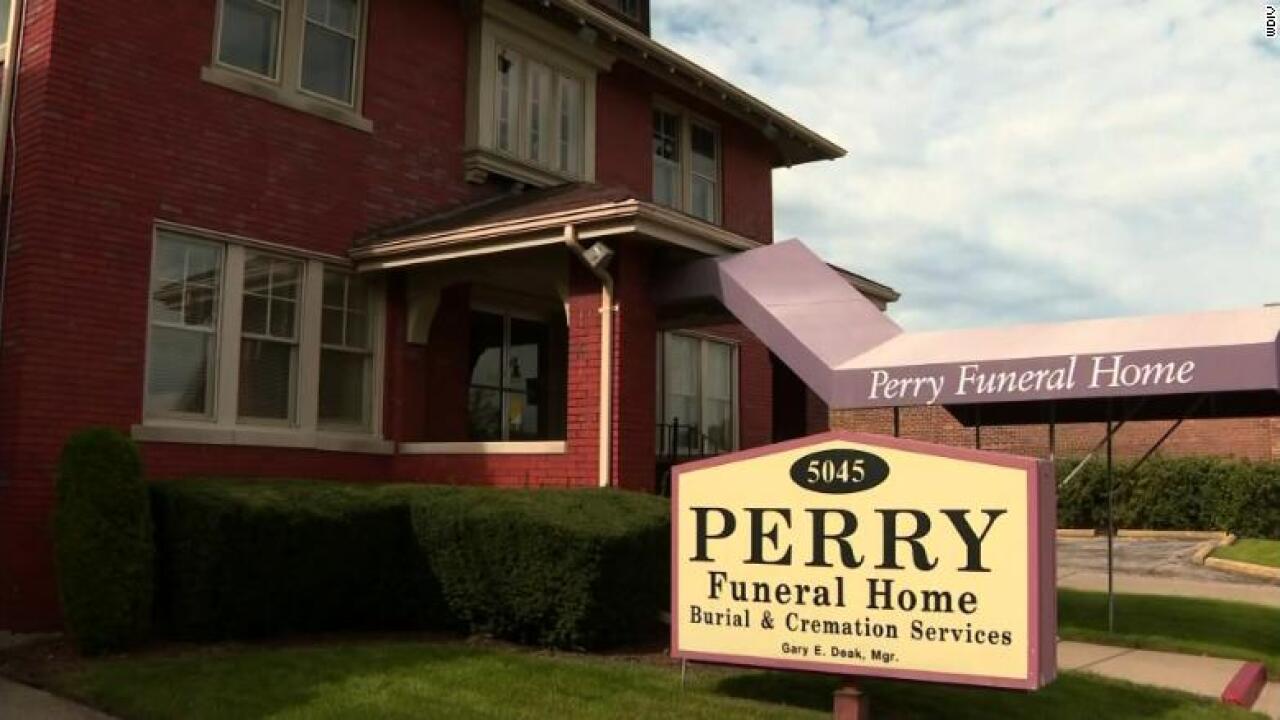 Michigan authorities say they’ve found improperly kept remains of fetuses and infants at a second Detroit funeral home, just one week after similar remains were found at the first.

Police and license inspectors found the remains of 63 fetuses or infants — some of whom died three years ago — at Perry Funeral Home on Friday, the Detroit Police Department said.

Inspectors raided the funeral home in response to a complaint, the Michigan Department of Licensing and Regulatory Affairs said, without releasing details of the complaint.

Thirty-seven of the dead fetuses or infants were found in three unrefrigerated boxes, police and the regulatory department said. Twenty-six were in a freezer, police said.

Licensing and Regulatory Affairs said it has suspended the funeral home’s mortuary science license because of “multiple violations of Michigan’s public health and occupational codes and an imminent threat to the public health and safety.”

Police have not said any charges have been filed; Detroit Police Chief James Craig said his department is investigating.

“I am committed to get to the truth,” Craig said Friday, according to CNN affiliate WDIV. “… This is deeply disturbing.”

Michigan law says funeral directors generally must supervise a body’s final disposition within 60 days of receiving it. Those who don’t may be found guilty of at least a misdemeanor, punishable by up to 90 days in prison.

For bodies improperly kept beyond 180 days, a director could be charged with a felony, punishable by up to 10 years in prison.

Some of the 63 sets of remains found at Perry Funeral Home on Friday were fetuses or infants that died in 2015, Licensing and Regulatory Affairs said.

Licensing and Regulatory Affairs said the funeral home also failed to certify and file death certificates “for the dead bodies of the fetuses and infants for whom they assumed custody with the appropriate governmental authority within 72 hours of death.”

A man who answered the phone at Perry Funeral Home on Saturday afternoon declined to comment for this story.

Other remains found at another funeral home last week

Friday’s discovery came a week after Licensing and Regulatory Affairs workers discovered the remains of 10 fetuses and one infant in a drop-down ceiling of a separate, former funeral home in Detroit.

The site of that former business — the Cantrell Funeral Home — was raided October 12 in response to an anonymous letter, authorities said.

That marked Licensing and Regulatory Affairs’ third visit to the premises in only a few months.

Cantrell Funeral Home was shut down in April by Licensing and Regulatory Affairs for multiple violations, including improper storage of embalmed bodies, with two in an advanced stage of decomposition, according to a press release.

In August, an anonymous phone call led Licensing and Regulatory Affairs investigators back to the building, where one fetus and some cremated remains were found, Craig said.

After the remains of 10 fetuses and one infant were found on October 12, a cadaver-trained police dog searched the building and no additional bodies were located, Detroit Police Lt. Brian Bowser said.

“Detroit Police Department has opened a criminal investigation on allegations of a felony,” Craig said a press conference Monday. The investigation into that felony charge — failure to supervise the final disposition of a dead body within 180 days — will involve an interview with Raymond Cantrell II, who owned the former funeral home, Craig said.

Details about why the remains were being stored at Perry Funeral Home and the former Cantrell Funeral Home, or whether the cases are in any way related, weren’t immediately available.

Cantrell did not respond to CNN’s request for comment.

Charges have not yet been filed in the Cantrell Funeral Home case, but Craig said he has been in touch with both the Michigan Attorney General’s Office and the Wayne County prosecutor about what the next steps might be.

The Wayne County Medical Examiner’s office said it is working to identify the Cantrell Funeral Home remains and notify any families.