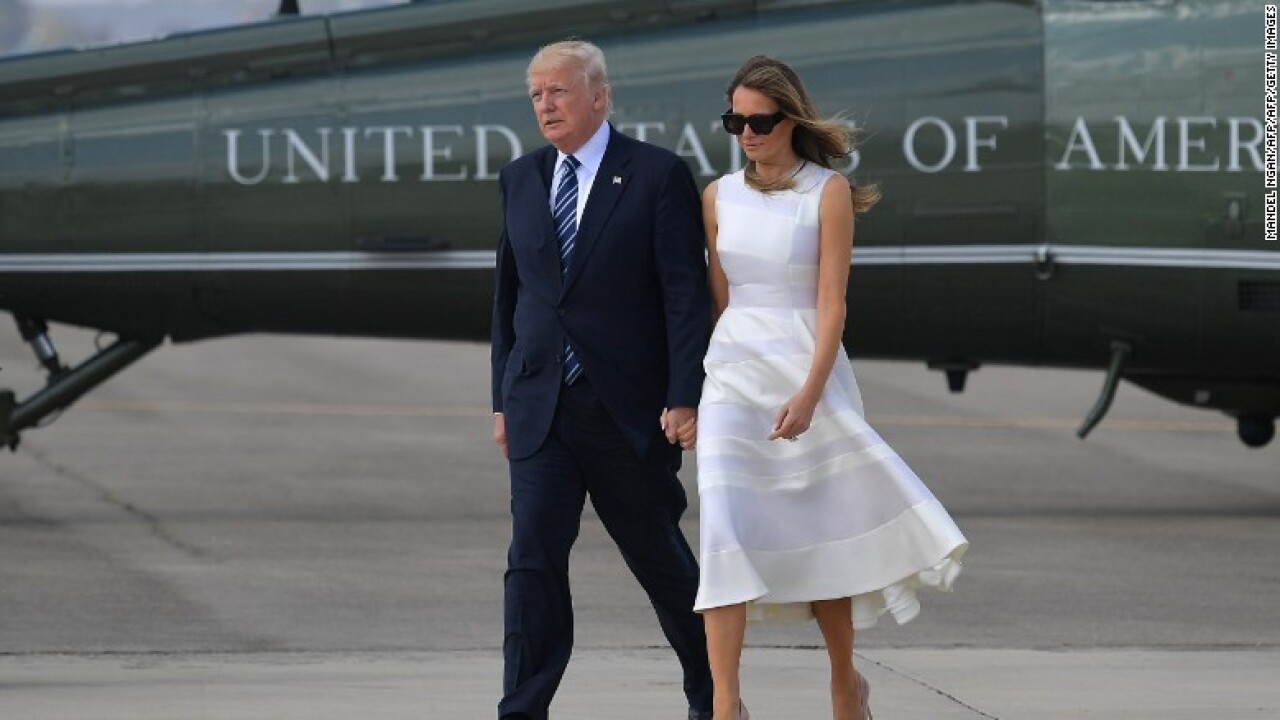 President Donald Trump and First Lady Milania Trump arrived in Florida on Monday to survey the damage caused by Hurricane Michael last week when it hit the Florida Panhandle as a Category 4 hurricane.

Trump and the First Lady will arrive at Eglin Air Force Base in Okaloosa County, Florida.

It’s been five days since Hurricane Michael decimated Mexico Beach, Florida, and dozens of residents are still nowhere to be found.

Search crews are sifting precariously through heavy rubble in search of about 30 to 35 people, the city’s police chief said.

And beyond the ruins of Mexico Beach, thousands of Florida residents must start a new life marked by grief, desperation and uncertainty.

More than 250,000 are still without power Monday morning, unable to fend off the stifling heat. Drivers are lining up for hours to get fuel. And residents in the hardest- hit areas are relying on airdropped food and water to survive.

But with dozens of people still unaccounted for, the prevailing fear is that the death toll might rise. The ferocious hurricane has already killed 18 people in four states.

On Monday, President Donald Trump will visit some of the devastated cities in Florida and Georgia.

Over the weekend, he made a disaster declaration in Georgia for Baker, Decatur, Dougherty, Early, Miller, and Seminole counties. It follows the declaration of a major disaster in Florida’s Bay, Calhoun, Franklin, Gadsden, Gulf, Jackson, Liberty, Taylor, and Wakulla counties on October 11.

The declarations give affected residents and businesses access to federal aid and funding.

On Sunday, FEMA said more than 58 evacuations and 403 rescues or assists had been completed by several agencies in the days since Hurricane Michael made landfall. Authorities also completed 3,362 shelter-in-place checks, and performed structural assessments on 7,257 structures in Florida.

FEMA has 14 teams in place in Florida to help people register for disaster assistance. There are also 17 distribution points throughout Florida and Georgia where people can get food and water in places where stores remain closed or there are limited supplies.

Residents could still be trapped

Hundreds of people from across the country have called local officials, desperate for news on what has happened to their loved ones.

But rescue attempts have been arduous because of widespread debris and buckled roads that make transportation difficult.

Crews are using bulldozers to move debris and cutting trees with chainsaws to clear highways and hundreds of roads blocked by the wreckage.

“What’s taking up most of your time right now just gaining access to some of these areas,” said Panama City Fire Chief Alex Baird.

The fire department has received more than 200 calls for checks on residents and Baird said it could take days or even weeks before they complete them. Residents still unaccounted for could be trapped in isolated areas, and crews need to go door-to-door because there is no power and cellphone service is spotty.

Michael has killed at least 18 people

At least 18 people have died since Hurricane Michael made landfall Wednesday — eight of them in Florida, including Steven Sweet, 44, who died when an oak tree fell on his Gretna home.

An 11-year-old girl died in Georgia when a metal carport, blown about by high winds, came crashing through her family’s roof. Two of the three people who were killed in North Carolina died when their vehicle struck a tree that had fallen because of high winds, said Adrienne Jones, deputy director for the McDowell County Emergency Medical Services.

Six people died in Virginia. Four drowned and a firefighter was killed when a tractor-trailer lost control and hit his truck on a wet highway in Hanover County. The Virginia Department of Emergency Management said Saturday the sixth person died in Charlotte County.

In Florida, the seaside town of Mexico Beach was virtually wiped away, and rescue teams have been using dogs as they combed through rubble piles and mangled structures one more time looking for survivors.

About 280 of the town’s 1,200 residents had said they planned to ride out the storm, but many fled at the last minute when Michael quickly gained strength, Mayor Al Cathey said.

Every school in Bay County, Florida, was damaged, officials said.

The future of thousands of students also remains unclear, especially those in Bay County, where schools are closed until further notice.

“It’s not going to be a normal school year. There’s nothing normal about where we are right now,” Bay District Schools Superintendent Bill Husfelt told CNN affiliate WMBB.

With the majority of its 26,000 students displaced and many schools deemed not safe because of the damage, officials are discussing alternative ways to get students back to the classroom and to provide psychological aid for them.

“I would say every single school in Bay County has some type of damage, some more extensive than others,” said Steve Moss, vice chairman of the Bay District School Board. “Some it’ll probably take weeks or months to get online. Some it will take years.”