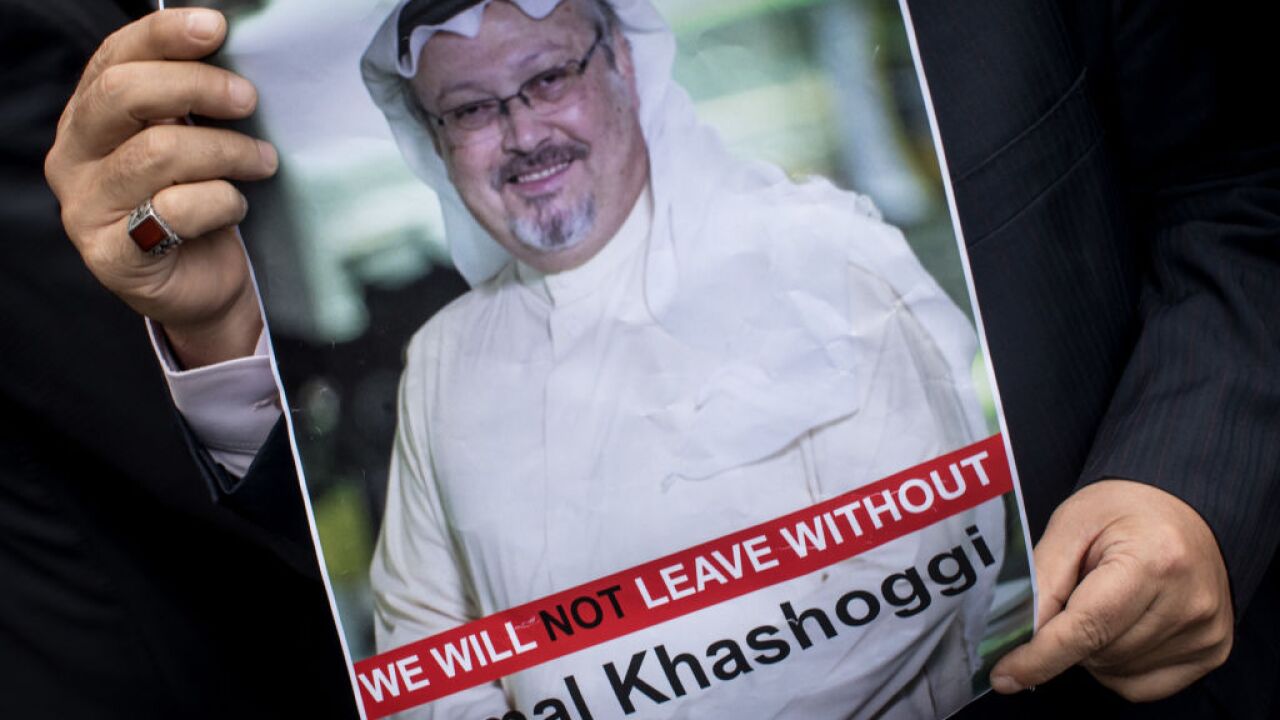 ISTANBUL, TURKEY – OCTOBER 08: A man holds a poster of Saudi journalist Jamal Khashoggi during a protest organized by members of the Turkish-Arabic Media Association at the entrance to Saudi Arabia’s consulate on October 8, 2018 in Istanbul, Turkey. Fears are growing over the fate of missing journalist Jamal Khashoggi after Turkish officials said they believe he was murdered inside the Saudi consulate. Saudi consulate officials have said that missing writer and Saudi critic Jamal Khashoggi went missing after leaving the consulate, however the statement directly contradicts other sources including Turkish officials. Jamal Khashoggi a Saudi writer critical of the Kingdom and a contributor to the Washington Post was living in self-imposed exile in the U.S. (Photo by Chris McGrath/Getty Images)

The Turkish fiancée of missing Saudi journalist Jamal Khashoggi has revealed how the couple spent their last hours together, writing that “tyrants eventually pay for their sins,” in a New York Times article on Saturday.

Hatice Cengiz, a doctoral student at a university in Istanbul, wrote: “If the allegations are true, and Jamal has been murdered by the errand boys of Mohammed bin Salman, he is already a martyr.”

Khashoggi, a columnist for The Washington Post and Saudi royal insider-turned-critic, entered the Saudi Consulate in Istanbul on October 2 to obtain paperwork for his upcoming marriage to Cengiz.

He hasn’t been seen in public since, and the disappearance almost two weeks ago has drawn international condemnation and sparked warnings from US President Donald Trump of “severe punishment” if the Saudis are found to be behind his death.

Cengiz said in the article that Khashoggi had been “cheerful” on the morning they had traveled together to the consulate, and that the couple had made plans for the rest of their day.

“We were going to browse appliances for our new home and meet with our friends and family members over dinner,” she wrote. “When we arrived at the consulate, he went right in. He told me to alert the Turkish authorities if I did not hear from him soon.”

The heartfelt article, which described how the pair met at a conference in Istanbul in May and bonded over their “shared passion for democracy, human rights and freedom of expression” was published on Khashoggi’s birthday, Cengiz said.

“I had planned a party, inviting his closest friends to surround him with the love and warmth that he had missed,” she wrote. “We would have been married now.”

Cengiz said Khashoggi fled Saudi Arabia with two suitcases for the US “amid a crackdown on intellectuals and activists who criticized Crown Prince Mohammed bin Salman.”

But rather than a dissident, he saw himself as a patriot “using his pen for the good of his country,” she said.

Cengiz added that she had seen reports President Trump wanted to invite her to the White House. But she said, “If he makes a genuine contribution to the efforts to reveal what happened inside the Saudi consulate in Istanbul that day, I will consider accepting his invitation.”

The US President said Friday he had not yet spoken with King Salman of Saudi Arabia — the father of bin Salman — in the wake of Khashoggi’s reported killing, but that he planned to “pretty soon.”

In the diplomatic fallout over Khashoggi’s disappearance, Saudi Arabia is facing growing isolation as firms pull out of a high-profile investment summit due to take place later this month in Riyadh.

Secretary of State Mike Pompeo on Saturday declined to confirm whether US Treasury Secretary Steven Mnuchin would still be attending the Future Investment Initiative conference being hosted by the Saudi Crown Prince — known as “Davos in the desert”— later this month.

“I think we need to continue to evaluate the facts and we’ll make that decision—I talked to Secretary Mnuchin about it last night, we’ll be taking a look at it through the rest of the week,” Pompeo, alongside President Trump, told reporters in the Oval Office on Saturday.

A spokesman for the UK’s international trade department told CNN that Fox’s diary was not yet finalized for the week of the conference.

Saudis yet to provide evidence of Khashoggi leaving consulate

Turkish authorities believe 15 Saudi men who arrived in Istanbul on October 2 were connected to Khashoggi’s disappearance and possible killing. At least some of them appear to have high-level connections in the Saudi government.

On Friday, a source familiar with the ongoing investigation told CNN that Turkish authorities have audio and visual evidence that Khashoggi was killed inside the consulate.

Saudi Arabia firmly denies any involvement in Khashoggi’s disappearance and says he left the consulate that afternoon.