How I got the story: CNN’s Brooke Baldwin recounts her bird’s-eye view of hurricane 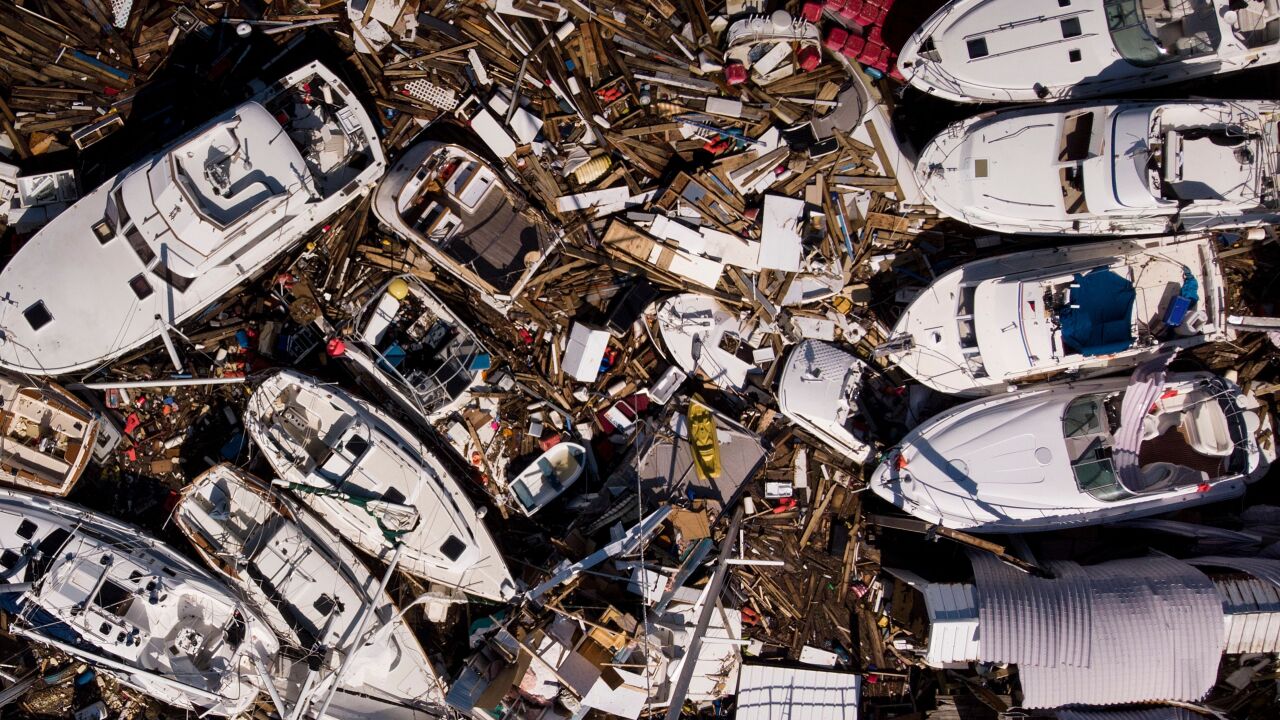 In this aerial view, storm damaged boats are seen in the aftermath of Hurricane Michael on October 11, 2018 in Panama City, Florida. – Residents of the Florida Panhandle woke to scenes of devastation Thursday after Michael tore a path through the coastal region as a powerful hurricane that killed at least two people. (Photo by Brendan Smialowski / AFP) (Photo credit should read BRENDAN SMIALOWSKI/AFP/Getty Images)

CNN’s Brooke Baldwin was in Destin, Florida, when Hurricane Michael first hit. As homes toppled, trees fell, and destruction piled up, she felt moved to report from the worst-hit area. So she decided to broadcast live from Mexico Beach, both on and from the air.

Baldwin and her team managed to get a helicopter to fly over the region on Thursday, thanks to workers at a local airport and helicopter hangar who tracked down an available pilot.

Along with CNN photojournalists Taka Yokoyama and Leonel Mendez, Baldwin obtained the first aerial images of the devastation in the oceanside town of Mexico Beach.

“It’s gone,” Baldwin said on air from the helicopter on Thursday. “It’s gone. … It’s obliterated and it’s awful to look at.”

Baldwin recounted over email her experience covering the hurricane, both in the helicopter and on the ground. Her answers have been edited for length and clarity.

Your helicopter ride over Mexico Beach gave CNN viewers a first look at aerial footage of the wreckage of the area. What inspired you to pursue going up in a chopper?

The second my show ended Wednesday, I saw video on Instagram from 12-year-old Tessa Talarico of Mexico Beach. I was gutted by the devastation and knew I had to get there. But how? It was so early, so no one had any idea [of] the status of the roads. But I just knew my best bet was by air. I had a feeling that was the only way in.

What was plan B if the folks at the airport said no to your request for help?

I hadn’t thought through a plan B at that point, because there was simply no other way we could have made it to Mexico Beach. Every road was obstructed, impassable. It was 6:45 a.m. Thursday and I was at Destin Executive Airport determined to commandeer a helicopter — no matter what. The airport staff did their best to find a pilot, our team made multiple calls to connections in the helicopter community, and eventually we found the ideal guy. CNN cleared the expense, guaranteed by a personal check from me, and off we went.

What tipped you off that Mexico Beach was the hardest hit? Was it simply because it’s by the water, or did you hear chatter from locals?

It was a combination of seeing Tessa’s Instagram and having just spoken to a woman, Linda Albrecht, live on my show that Wednesday afternoon. The emotion in her voice just gripped me. She had a home on Mexico Beach and she was getting texts from friends saying it was gone. She had described it as a “death.” I just couldn’t get her voice out of my head. I knew Mexico Beach would be bad. I just had no idea how much so ’til I got there.

In the helicopter, you said you’d never seen anything like the scene below you. What particularly stood out to you in that moment?

I’ve covered tornadoes and other natural disasters. I wasn’t on the ground for Katrina. But as our helicopter descended toward Mexico Beach, I just saw an entire town gone. Leveled, with the exception of a condo still standing here and there. Trees, homes, restaurants, boats, insulation, metal littered everywhere. To see it from the air, to know these were people’s homes and lives, it was a punch in the gut.

Due to lack of cell service in the area, how did you navigate any technical issues or challenges that arose while you were in the field?

Our only method of communication was our satellite phone. We had zero comms, just like the middle of an ocean or a war zone. On landing, I used our satellite phone to call the assignment desk at CNN to tell them we were safe. Our next priority was a live signal. We used Live-U to do live shots from the helicopter — flying low enough for cell service — but on the ground the cell service was non-existent. Photojournalists Taka and Leonel had to bring minimal equipment due to the weight restrictions of a small helicopter and brought just a BGAN (satellite uplink) most commonly deployed in war zones.

As soon as we spoke to homeowners, we knew we had to get a live shot out. Against us was a computer that was overheating in the scorching Florida sun (and no shade), and a patchy satellite phone signal. Thirty minutes later, we made it happen and we broadcast live from Mexico Beach for the very first time. The next challenge was keeping the BGAN computer fully powered for my two-hour live show.

From highway 98, Leonel and Taka found a man named John who was from Mexico Beach who had a damaged truck, with a surviving working engine. He had a quarter tank of gas, which was enough to keep his truck running for my show. We used the truck’s battery to power our laptop and BGAN uplink to take us live to the nation and around the world.

You’ve also spoken with people on the ground affected by the damage. Are there any particular stories of theirs that resonate with you?

Scott Boutwell was the first Mexico Beach resident I met. I saw him wandering the main road looking exhausted and dazed, carrying a wet brown briefcase. I stopped him and he told me he had ridden out the storm and survived but his home and rental home had not. He had been trying to find something of his from the rubble he could keep and it was his one brown briefcase. That just struck me.

Also, our ability to loan our satellite phone to folks like Scott and Sherri and others who hadn’t been in touch with loved ones, and they were able to call them to tell them they were okay. Lots of tears.

And also, the high-pitched beeping all around the rubble. It was people’s smoke detectors and burglar alarms going off. These are things that are meant to detect danger in a home — ironically, designed to forewarn. And here they were — a chorus of them after a category 4 hurricane had ripped through.

Have you come away from this experience with any new insights you’d like to apply to future coverage of natural disasters?

It’s really simple. Every service and facility we take for granted is gone. No power, no cell service, no road access, no gas, no bathroom. Communication is next to impossible, and telling the story requires determination. But the great thing is the kindness of strangers. They want their stories told, too.