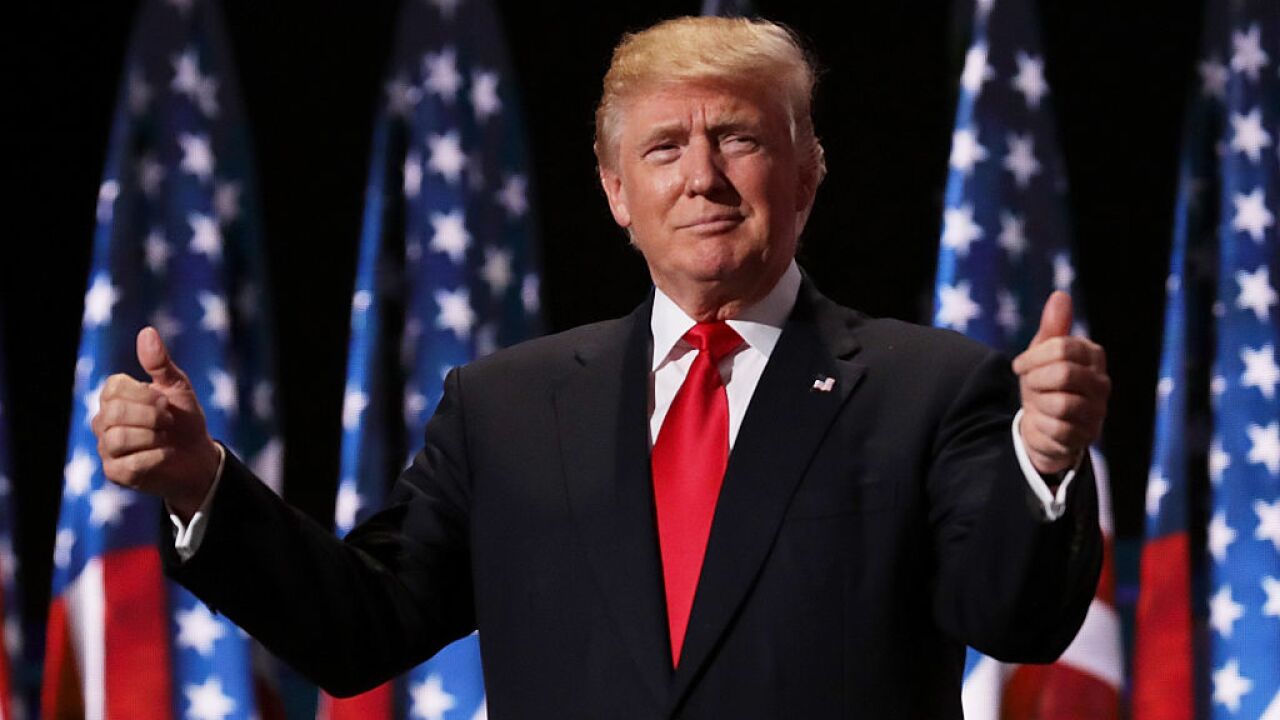 CLEVELAND, OH – JULY 21: Republican presidential candidate Donald Trump gives two thumbs up to the crowd during the evening session on the fourth day of the Republican National Convention on July 21, 2016 at the Quicken Loans Arena in Cleveland, Ohio. Republican presidential candidate Donald Trump received the number of votes needed to secure the party’s nomination. An estimated 50,000 people are expected in Cleveland, including hundreds of protesters and members of the media. The four-day Republican National Convention kicked off on July 18. (Photo by Chip Somodevilla/Getty Images)

President Donald Trump headed to Richmond, Kentucky, Saturday to campaign for Republican Rep. Andy Barr, capping off a week of near constant headlines coming out of the White House.

Senate Majority Leader Mitch McConnell was spotted by reporters joining Trump in the President’s limousine to ride over to the rally after greeting him on the tarmac as the president makes one of many stops in his efforts to pump up Republican numbers ahead of midterms.

“Heading to the Great State of Kentucky – Big Rally for Congressman Andy Barr – Fantastic guy, need his vote for MAGA!” Trump tweeted Saturday afternoon. “Strong on Crime, Tax Cuts, Military, Vets & 2nd A. His opponent will NEVER vote for us, only for Pelosi. Andy has my Strongest Endorsement!!! See you in Kentucky.”

The rally in the Bluegrass State is Trump’s fourth this week.

Among possible topics for Saturday’s speech were about Andrew Brunson, a pastor who returned to the United States on Saturday after being released from a Turkish prison.

“We’ve had a very harsh relationship over the past number of months because of what was happening,” Trump said at the Saturday news conference. “This is a tremendous step toward having the kind of relationship with Turkey, which can be a great relationship, that I know we’re going to have.

Brunson’s return comes amid controversy surrounding the disappearance of Washington Post columnist Jamal Khashoggi at the Saudi consulate in Istanbul last week. Turkish authorities allegedly have audio and visual evidence of Khashoggi’s death, CNN reported Friday, but have not shared them with the United States, a fellow NATO ally.

Trump said Saturday that the timing of Brunson’s release was a “strict coincidence.”

The President has also said that he does not want to re-open the Saudi arms deal he brokered in light of the allegations — a deal that he appraises at $110 billion, but which Saudi Arabia has only followed through on $14.5 billion.