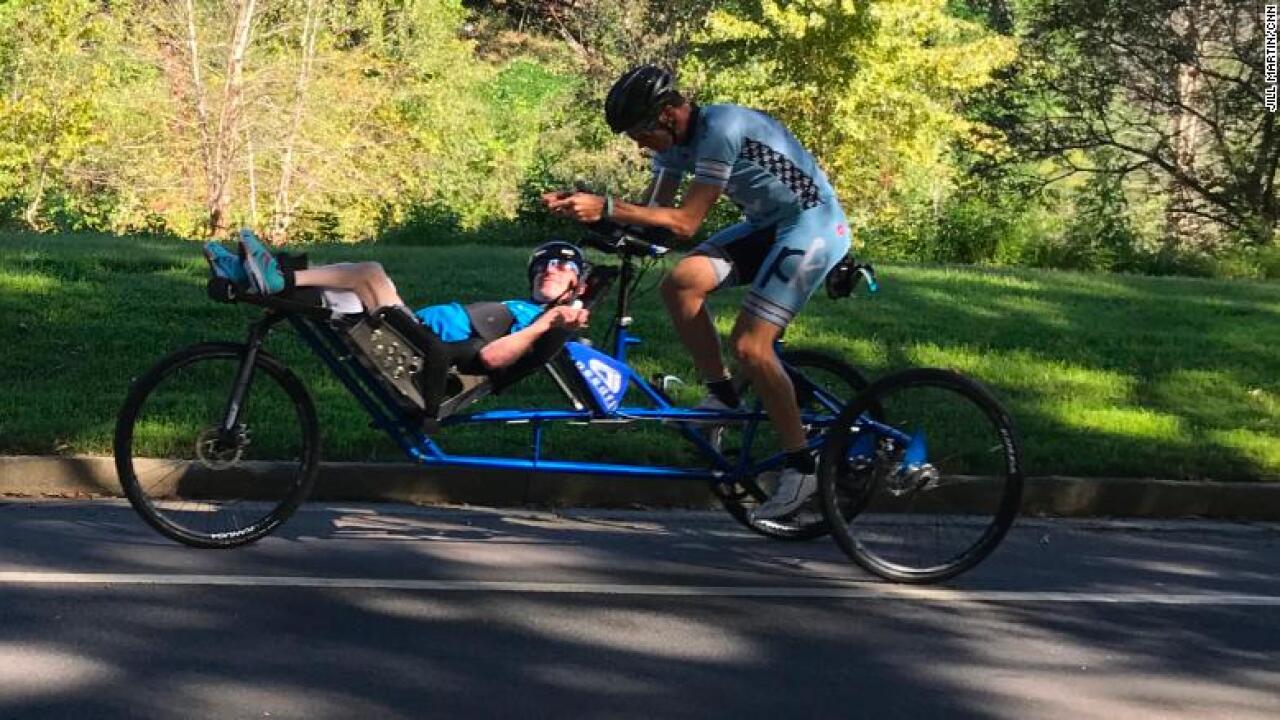 They needed another way in, and perhaps writing would do the trick.

In 2012, a year after they started racing together, brothers Brent and Kyle Pease started to dream about competing at the Ironman World Championship in Kona, Hawaii. But the world’s preeminent triathlon doesn’t accept just anyone.

The duo couldn’t qualify. Kyle has spastic quadriplegia cerebral palsy, affecting all four of his limbs, a disability he was diagnosed with when he was six months old.

So as one of their approaches to gain entry, the brothers took a page out of the script from the classic movie “The Shawshank Redemption.”

“We tried the Andy Dufresne method,” Brent says, referring to the film’s main character, played by Tim Robbins, petitioning the authorities to improve the prison library. “I just dropped a letter in the mail every Friday afternoon until they finally responded. At one point, they just said in a very nice way, ‘Please stop bothering us.'”

The brothers moved on. Sure, Kona was a personal goal, but they had a bigger purpose.

The Kyle Pease Foundation, founded in 2011 to improve the lives of the disabled through sports, was growing. This March, they had 58 people at the Publix Half Marathon, in their home city of Atlanta, with them.

Kyle works at Piedmont Atlanta Hospital as a greeter. Brent and his wife had their second child, and they bought a house in nearby Chamblee. The brothers have continued to race, including doing the Ironman in Boulder, Colorado, last year for fun. They had race plans for Ironman 70.3 in Raleigh, North Carolina, in June.

“I had 1,500 other things going on other than worrying about Kona,” Brent says. “I remember getting to Raleigh and just thinking, ‘I’m good. I’ll do this race with Kyle, and I’ll just take a break the rest of the summer.'”

Plans, though, can change quickly, and Kyle and Brent were hit with a surprise almost immediately after crossing the finish line.

“Kyle and Brent,” the race announcer said, his voice booming through a loudspeaker, “on behalf of Ironman, because it’s the 40th anniversary of Ironman, we would like to invite you two to race in Kona this year and inspire us for another 40 years!”

Brent covered his face, and he began to cry. He embraced a smiling Kyle, who thinks he went into shock.

“It took me a couple hours for it to sink in,” Kyle says. “But it’s a dream come true.”

On a mid-September morning, a park ranger pulls up in an SUV along a gravel trail near the Chattahoochee River. He stays in his car, observing. The slightly uneven but mostly flat terrain, lightly sprinkled with leaves and pine straw, softly crunched as exercisers ran or walked by. The shade is a temporary shield from what would be another hot day in the metro Atlanta area.

The ranger’s focus is on two athletes that currently are stationary. Seated on a wooden bench is Brent. Next to him is 33-year-old Kyle in a wheelchair.

Brent, 35, waves at the ranger, who had just learned that the two brothers are competing in Kona on October 13.

“The real one,” the ranger says, clearly impressed, of the notoriously brutal race. He wishes the brothers luck before driving away, saying he had done Ironman Coeur d’Alene in Idaho.

There are several Ironman races, but Kona, surrounded by lava fields, is the most famous triathlon of all. A full Ironman is a 2.4-mile swim, 112 miles on the bike and a 26.2-mile run. The Pease brothers must complete the grueling Kona course in less than 17 hours. They have done three together before: Wisconsin (2013), Florida (2014) and Boulder.

Brent, with a rope tied to his waist, will pull Kyle in an inflatable kayak during the swim. During the bike portion, Kyle will lie on his back at the front while Brent pedals in the rear. The run will be Brent pushing Kyle, who will be seated in a racing wheelchair.

As a wheelchair-assisted team, the Pease brothers are bidding to join some legendary company as they attempt to become the second such duo to complete Kona. The first was famous father-son team Dick and Rick Hoyt, who did it in 1989 and 1999.

“Just to be even mentioned with those type of people like the Hoyts or the champions that have competed and endured in that type of thing, it would be incredible to be part of that, to know that we’ve tackled the hardest one-day endurance challenge on the planet,” Brent says.

Other teams of this type have tried to duplicate the Hoyts at Kona but were unsuccessful. Even the Hoyts themselves, according to Ironman records provided to CNN, experienced heartbreak. They’re listed as “DNF” — did not finish — in 1988, 2003 and 2004. They also were registered in 2006 but did not start the race.

The challenge the Pease brothers have in front them is daunting, one they’ve been waiting years to do.

“What an honor it is,” Kyle says. “I think the Hoyts have paved the way for people like Brent and myself. … To be a part of that history is amazing. It really is an accomplishment and a credit to the love that me and Brent have for one another.”

This all started, unknowingly at the time, in 2010. Brent was competing in his first Ironman. His aspirations were about finding something to focus on and to get in shape.

“I kept the college party going for a few years,” Brent acknowledges.

He invited his family, including Kyle, to be there at the finish line in Kentucky. What happened that day changed their lives.

Kyle watched the athletes pushing themselves on the course, and a thought struck him: He could relate.

“It kind of reminded me of my whole life, the challenges I’ve faced on a day-to-day basis,” Kyle explains.

After Brent finished the race, the two brothers sat down together, and Kyle peppered Brent with questions. The last one: Can people in wheelchairs do the Ironman?

“Little did I know, that’s when the journey was going to begin,” Kyle says.

Brent and Kyle grew up with their brother Evan, who is Kyle’s twin, in Atlanta. Physical activity was part of the three brothers’ lives starting at a young age, whether it was playing baseball or basketball, or Brent on his bicycle pulling around a Little Tikes Cozy Coupe with Kyle inside.

While Kyle was included, he didn’t experience participating in sports the same way. He couldn’t compete in them like his brothers could.

But that hasn’t stopped Kyle from living his life to the best of his ability. He takes MARTA, Atlanta’s mass transit service, everywhere, giving him, he says, “a lot of independence and freedom because I depend on people to do everyday tasks for me.”

After that 2010 Ironman, a vision took shape. Kyle and Brent started racing together in 2011. They started the foundation later that year.

As the miles racked up, the duo started doing triathlons. A few years ago, a woman from USA Triathlon, which keeps age group rankings, called Brent for some clarification. She wanted to see if Brent was related to Kyle and if they always raced next to each other or tried to finish together. “I noticed your times are very close,” she remarked.

Kyle — who sits in front of Brent during the run — was ranked ahead of Brent because his timing chip would cross the finish line first. The records showed he narrowly had beaten Brent in every race.

At last, Kyle had found an outlet where he had the same experience as his competitors.

“In triathlon and Ironman and a 5K, he gets that,” Brent says. “When somebody calls you and asks you about Kyle’s age group ranking, he’s being treated just like everybody else, and that was really what we were trying to tap into.”

It’s tough to say what Brent would be doing if they weren’t racing together, but his guess is he would be complaining about his job.

“I did a lot of things,” Brent says. “I was in real estate and project management, and in 2008 when the bottom dropped out, I didn’t have a job. I was parking cars at night, and I was working, doing bank foreclosed assets just to pay bills, and it was miserable.”

These days he’s the executive director of the foundation and an endurance sports coach.

‘When we work together, we get the best outcome’

Brent has been training 20-25 hours a week for Kona, while 10-15 hours per week is with Kyle. They’re both tested — physically and mentally.

“I sit in a wheelchair for 16 to 18 hours a day,” Kyle explains. “But when I do the Ironman, I’m being moved around a lot and experiencing things that I am not normally accustomed to. It wears me out. Even though I’m not doing the physical work of it, it takes a big toll on me as well.”

The work is more enjoyable when they’re together. On a recent Saturday, they were on the road for seven hours, “and we were cracking jokes and talking and checking on football scores,” Brent says. “That was fun. We can’t exactly do that in the middle of the lava fields.”

Brent grew up swimming, and that will be the easiest for both him and Kyle from a physical standpoint.

Their apprehension lies in that middle leg. The bike weighs more than 50 pounds, a big chunk of rolling steel carrying two humans. Provided they can get to the marathon portion within the time limit — “You have two hours and 20 minutes to finish the swim, and then you have 10 and a half hours from the start of the race to the bike cutoff,” Brent explains — they’re confident they will finish.

Brent is Kyle’s arms and legs, and Brent borrows Kyle’s energy. Want proof? Go back to 2014 at Ironman Florida. It was 39 degrees, and the wind was gusting up to 40 miles per hour.

“I remember at mile 62, I got off the bike to go to the bathroom, and I was standing there and there was nobody around,” Brent recalls.

“I thought, ‘I’ll just stay here. I’ll lay down and somebody will come pick me up. Somebody will get Kyle off the side of the road, and nobody will care.’… Kyle talked me off the ledge. He said, ‘Can you just go to mile 63? Can you go to mile 64?’

“So, you know, in some ways, we have a competitive advantage because we are with each other the whole time, that we can talk each other through these things.”

Kyle thinks that it goes both ways.

‘Anything is truly possible’

Brent has been envisioning the finish at Kona for a few years now, which will be under darkness.

“You spent 14, 15 hours zapping all of your energy and all of a sudden, it starts to come back,” Brent says. “All of a sudden, you forget all the stuff that mentally you’re saying is too hard, so that’s what I think about. That’s what keeps me motivated in training is thinking about that finishing chute.”

The quest to conquer Kona is no longer a dream. It is real, and it ceased to be just a personal goal.

“When we go out there, we’re not only going to represent ourselves and our family and our loved ones, but we are going to be representing the Kyle Pease Foundation and all the families we support,” Kyle says. “That’s why we’re doing this, to support them and show them that anything is possible.”

And as to how he might react at the finish?

“I’ll probably be screaming and smiling from ear to ear.”