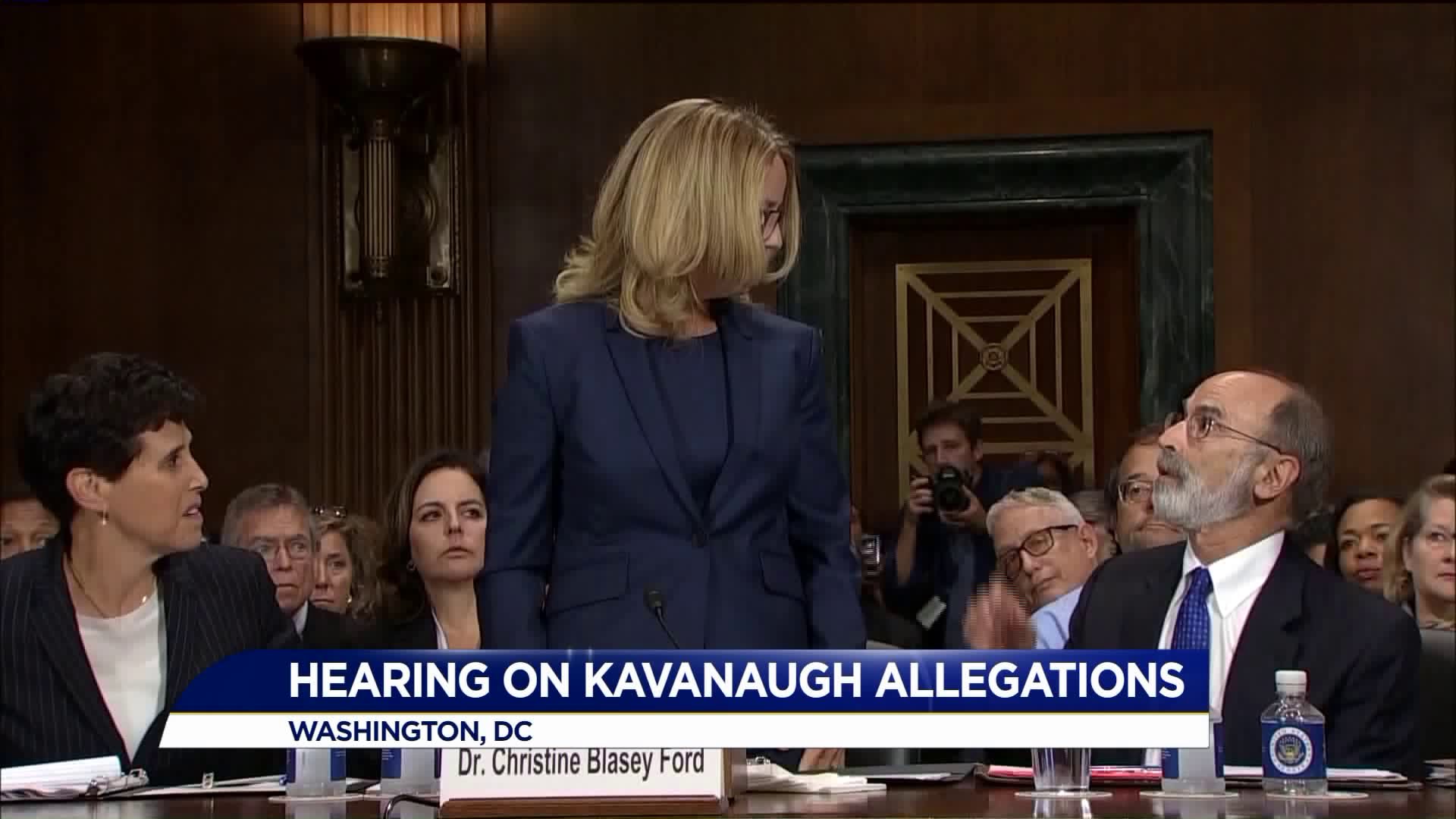 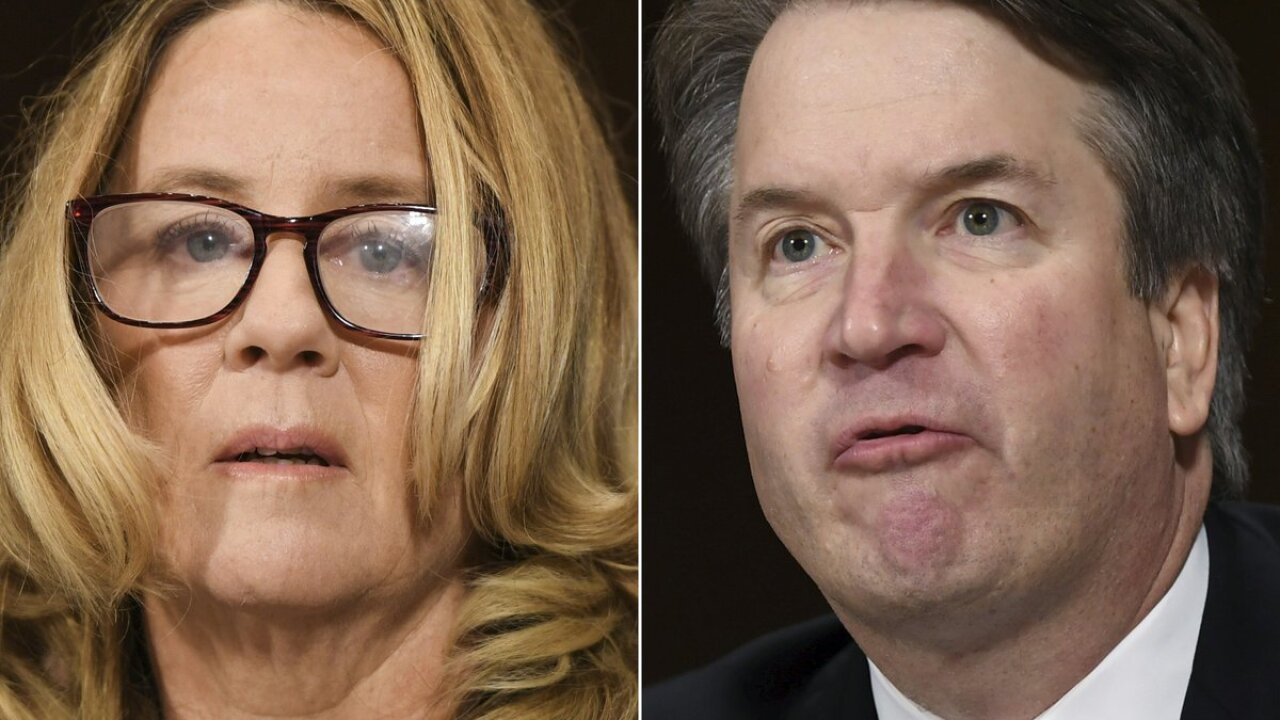 Brett Kavanaugh called himself the victim of a "calculated and orchestrated political hit" Thursday, saying he and his family have been "totally and permanently destroyed" by the sexual assault allegations he faces.

Speaking at a near-shout at times before the Senate Judiciary Committee, he called the allegations a result of "pent-up anger about President Trump and the 2016 election" and said his confirmation process has become a "circus."

"I've never done this," Kavanaugh said of the assault charges by Christine Blasey Ford. "It's not who I am. I am innocent."

He said he bears Ford no ill will and teared up when recounting his 10-year-old daughter Liza, when saying her prayers, said "we should pray for the woman."

In testimony that could determine if he is confirmed to the Supreme Court, Kavanaugh said he doesn't question that Ford was sexually assaulted by some person, "but I've never done that to her or to anyone."

He said he welcomed any investigation, even as Republican senators have said they don't see a need for the FBI to probe Ford's claim.

He told senators that to defeat his nomination, they'll have to vote him down. "I will not be intimidated into withdrawing from this process," Kavanaugh said.

Ford: Kavanaugh, friend were 'having fun at my expense'

Kavanaugh's denial came after a "terrified" Ford described in graphic detail how she says Kavanaugh sexually assaulted her at a party when the two were teenagers. She told senators her strongest memory of the night is Kavanaugh and his friend's laughter as they were "having fun at my expense."

Ford relived the night of a party when she was 15 and Kavanaugh was 17, telling senators she "believed he was going to rape me."

The hearing featured jarring, rapid jumps between Ford's memory being tested by Rachel Mitchell, the Arizona sex crimes prosecutor who Republican senators hired to ask questions on their behalf, and Democrats whose questions were designed to establish that Ford is certain it was Kavanaugh -- not somebody else -- who assaulted her.

When California Democratic Sen. Dianne Feinstein asked if there is any chance she has mistakenly identified Kavanaugh, Ford said "absolutely not."

"Very much so," she told Sen. Patrick Leahy, D-Vermont, of her certainty it was Kavanaugh.

Inside the hearing, Mitchell was a shield for the committee's 11 male Republican members, putting a female face on the detailed questions seeking inconsistencies in Ford's account.

But outside the hearing, some Republicans who had handed off their opportunity to question Ford cast doubt on her testimony.

Sen. Lindsey Graham, R-South Carolina, said it is "very suspicious of how this all came out. All the media contacts, hiring a lawyer to take a polygraph makes it even more suspicious. This was meant to be anonymous."

Sen. Orrin Hatch, R-Utah, told a reporter it was "it's too early to say" if Ford is credible.

"I don't think she's uncredible. I think she an attractive, good witness," he said. Asked what he meant, the senator said, "In other words, she's pleasing."

Democrats pressed Kavanaugh to support an FBI investigation into the allegations he faces -- and a combative Kavanaugh refused to ask for one.

"Ask him to suspend this hearing and nomination process until the FBI completes its investigation of the charges made by Dr. Ford and others," Durbin said.

"Stop the clock," he said. "This committee is running this hearing. Not the White House, not Don McGahn, not even you as the nominee."

Democrats also pressed for Kavanaugh friend Mark Judge, who Ford says was in the room when Kavanaugh assaulted her, to be compelled to testify under oath.

Leahy pressed Kavanaugh for answers on a character Judge, in a book he wrote, named "Bart O'Kavanaugh."

"You'd have to ask him," Kavanaugh said.

"Well, I agree with you there. That's why I wish the chairman had him here, under oath," Leahy responded.

Kavanaugh specifically addressed claims by friends and former classmates that he frequently drank in high school and college in his opening statement.

"I liked beer. I still like beer. But I did not drink beer to the point of blacking out, and I never sexually assaulted anyone," he said. "There is a bright line between drinking beer, which I gladly do and I fully embrace, and sexually assaulting someone, which is a violent crime."

As she questioned Ford, Mitchell repeatedly used the word "correction" when going through a series of minor clarifications in Ford's letters and comments.

Ford politely answered them -- at times apologizing for conflicts such as saying she hadn't again spoken to other people who were at the party where she says Kavanaugh assaulted her, and then following up that she did speak again to a woman who was there.

At one point, Mitchell spent several minutes asking Ford about her fear of flying and going through years of Ford's work and personal travel, including annual trips to the East Coast to visit family and vacations in Hawaii and Costa Rica. Ford confidently joked that it was easier for her to fly when looking forward to a vacation.

Mitchell asked Ford both before and after a lunch break who paid for a polygraph that she took before going public with her allegation. After the lunch break, Ford attorney Debra Katz interjected and said: "Let me put an end to this misery, her lawyers have paid for her polygraph."

The questions were similar to what a witness might face in a criminal trial, but the optics are unusual for a Senate hearing. In a moment that underscored how Republican senators sought to avoid being the ones to ask Ford pointed questions, at one point Ford looked to Sen. Chuck Grassley of Iowa, the committee's chairman, and asked: "Can I address you directly?"

By passing their five minutes of questioning on to Mitchell, the all-male GOP members of the committee also passed on an opportunity to say anything publicly to Ford.

Democratic members, meanwhile, used the hearing to praise her for coming forward.

"You have given America an amazing, teaching moment," said Connecticut Sen. Richard Blumenthal. "You have inspired and you have enlightened Americans."

As the committee broke for lunch, Republican Sen. Ben Sasse of Nebraska approached Ford. "Thank you for being here," he said, shaking her hand.

Ford began the hearing by describing the night she says Kavanaugh sexually assaulted her, when the two were at a house party in Maryland. She said she was pushed into a bedroom where Kavanaugh "began running his hands over my body and grinding into me."

In the room, with Kavanaugh and his friend Mark Judge, she said, a drunk Kavanaugh "groped me and tried to take off my clothes."

"I believed he was going to rape me. I tried to yell for help. When I did, Brett put his hand over my mouth to stop me from yelling," she said. "This is what terrified me the most and had the most lasting impact on my life. It was hard for me to breathe, and I thought that Brett was accidentally going to kill me."

She also said she didn't tell her parents what had happened immediately because she didn't want to reveal that she was at a house party where alcohol was present and because Kavanaugh hadn't raped her. She said she described the specific details for the first time in a May 2012 couples' counseling session.

Ford told the committee that what happened with Kavanaugh has "haunted me episodically as an adult."

Until July 2018, Ford said, she had never named Kavanaugh as her attacker outside of therapy. She said seeing Kavanaugh's name on the short list of candidates for a Supreme Court appointment made her feel it was her "civic duty" to share what had happened.

"It was an extremely hard thing to do, but I felt that I couldn't not do it," she said.

She told the committee that she is "here today not because I want to be. I am terrified. I am here because I believe it is my civic duty to tell you what happened to me while Brett Kavanaugh and I were in high school."

Kavanaugh will later attempt to convince majority Republicans on the committee to confirm him despite Ford's allegations -- and as other accusations of sexual misconduct emerge from Kavanaugh's youth.

The hearing opened with partisan barbs before either Ford or Kavanaugh testified.

Grassley opened the hearing by pointing out that Kavanaugh had been through six FBI background checks with no hint of sexual assault allegations emerging. He called Democratic calls for an FBI investigation into the accusations "obstruction."

Grassley repeated his assertion that he has no authority to force the FBI to investigate the allegations, and said "it was easy to identify all the alleged witnesses and conduct our own investigations."

He also criticized the committee's top-ranking Democrat, Feinstein, for failing to immediately share Ford's claim when she received Ford's letter detailing her allegation in July.

"Every step of the way, the Democratic side refused to participate in what should have been a bipartisan investigation," Grassley said.

Feinstein took a shot at Grassley, telling Ford that "the chairman chose not to do this -- but I think it's appropriate that you're properly introduced," and then running through Ford's resume, which includes two master's degrees.

"I am very grateful to you for your strength and your bravery in coming forward. I know it's hard," she said.

Trump and Vice President Mike Pence both phoned Kavanaugh to voice their support for him ahead of Thursday's hearing. Trump's message when he spoke with Kavanaugh, a source familiar with the call said, was to be aggressive and forceful in his denials, and not afraid to push back on the allegations.

Ford's husband, Russell Ford, is in California with their two children and is not present, Ford's team tells CNN.

Kavanaugh planned to watch at least the first part of Ford's testimony from Pence's ceremonial office on the Senate side of the Capitol, a source familiar with the plan said. As Ford's legal team requested, Kavanaugh will never be in the same room as Ford.

The Supreme Court nominee has been "incandescent" -- as in extremely angry -- according to one person involved in his preparation. For Kavanaugh, his supporters say, it's not as much about a Supreme Court seat now but defending his name. He vehemently denies Ford's allegations and says that perhaps she was sexually assaulted by someone in some place but it wasn't him.

Thursday's hearing comes as two other named individuals have levied allegations against Kavanaugh. Democrats are pushing Grassley to subpoena Judge, the Kavanaugh friend who Ford says was in the room with him when she was assaulted.

Regarding other allegations -- some of which have been anonymous -- that have come to the committee since Ford came forward, Kavanaugh has called some of them "ridiculous," his supporters tell CNN.