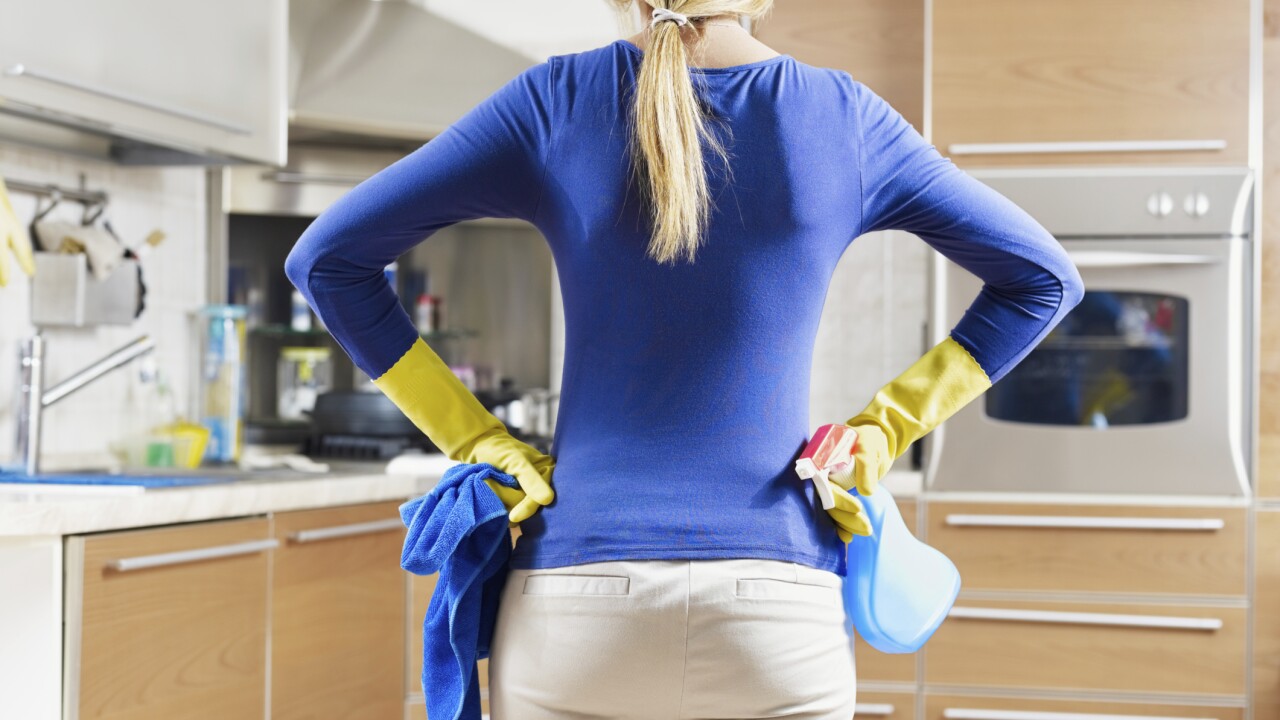 (CNN) — Multi-surface cleaners and other commonly used household disinfectants could be making children overweight by altering the bacteria found in their guts, a new study published Monday in the Canadian Medical Association Journal suggests.

Infants living in households where antimicrobial disinfectants are used at least weekly were twice as likely to have higher levels of the bacteria Lachnospiraceae at ages 3 to 4 months than children whose homes did not frequently use disinfectants, the Canadian researchers found. When those children with higher levels of Lachnospiraceae were 3 years old, their body mass index (BMI) was higher than children who do not live in homes that frequently use disinfectants, the study also showed.

The bacteria Lachnospiraceae are “a normal component of our gut microbiota,” Anita Kozyrskyj, senior author of the study and a University of Alberta pediatrics professor, said in a CMAJ podcast.

However, she explained that it is known “from animal studies that higher levels of Lachnospiraceae have been associated with higher body fat and insulin resistance.”

‘Culprit’ linking disinfectant use and weight

The new report uses data from the Canadian Healthy Infant Longitudinal Development study, which began in 2009 with researchers actively following participants as they grow and develop, from mid-pregnancy into childhood and adolescence.

When infants were 3 or 4 months old, their parents provided a poop sample for each infant and answered questions about their home, explained Kozyrskyj. Samples from 757 infants were profiled and analyzed along with BMI data at older ages and parental use of disinfectant products.

One of the study’s findings is that roughly 80% of Canadian households use disinfectant products, most often multi-surface cleaners, at least once weekly, said Kozyrskyj.

While the researchers found an increase in Lachnospiraceae bacteria with more frequent cleaning with disinfectants, they did not see the same association with washing detergents without the bacteria-killing ingredients found in disinfectants or eco-friendly cleaners.

“These results suggest that gut microbiota were the culprit in the association between disinfectant use and the overweight,” said Kozyrskyj.

Gut microbiota refers to the community of bacteria that live harmoniously together in our digestive tract, explained Kozyrskyj. This community develops during infancy when we gain a larger number of bacterial species, with each species decreasing or increasing in number over time.

“We each possess a unique gut microbiota but there are common patterns, there are common microbes that are expected to be found in childhood and in adulthood,” said Kozyrskyj. “I would say around 3 years of age we have a bacterial composition that we can call our own. And it stays with us for the remainder of our life.”

This is important because past research has drawn a connection between gut microbiota composition and weight in adulthood.

Though the study results highlight the connection between disinfectants and the gut microbiota, Kozyrskyj noted that “it still is a big leap to use the word causation.”

That said, some of the evidence clearly points to a direct cause-effect relationship between disinfectants and higher levels of the common gut bacteria, she said. For example, animal studies have found similar changes in the gut bacteria of piglets when exposed to disinfectants, she said.

And “higher frequency of use of disinfectant was associated with higher abundance of Lachnospiraceae,” said Kozyrskyj. Still, she warned that more research is needed to confirm these results and establish a causal relationship.

Richard Sedlak, executive vice president at the American Cleaning Institute, said in a statement that the institute was “disappointed at the sensational claims” made by the study authors. The study’s flaws include no accounting for the diets of the children, said Sedlak, who was not involved in the new study.

“Proper use of household cleaners and disinfectants is an important contributor to infection control and healthy homes,” he said. “These products are trusted by families to effectively clean, sanitize and disinfect areas of their homes, reducing opportunities for children at these young ages to suffer significant illnesses.”

“Proper use of EPA-registered disinfectants plays an important role in helping prevent the spread of flu,” added Sedlak, who quoted the US Centers for Disease Control and Prevention website, which advises people to “clean and disinfect surfaces and objects that may be contaminated with germs like flu.”

In a published commentary, Moira K. Differding and Noel T. Mueller, both of the Department of Epidemiology at Johns Hopkins Bloomberg School of Public Health in Baltimore, wrote that the study results were “biologically plausible.”

Why? The bacteria that we are exposed to during our infancy both educates our immune system and programs our metabolic system, explained Differding and Mueller, neither of whom participated in the new study. And in previously published studies researchers have found that disruptions in the natural development of the infant gut bacteria — due to a cesarean delivery, prenatal and postnatal antibiotics, or formula feeding — have been associated with a higher risk of childhood obesity, they said.

“The prevalence of childhood obesity continues to rise globally,” wrote Differding and Mueller, adding that it is “more important than ever” to identify obesity risk factors and ways to prevent high weight gains in children.

Kozyrskyj said one finding in the new study surprised the research team. Babies living in households that used eco-friendly cleaners had different microbiota — much lower levels of Enterobacteriaceae — and were less likely to be overweight as toddlers. Yet, an analysis of the data did not show that this altered bacterial community was linked to the reduced obesity risk in the children.

“The eco-friendly product-using mothers may be more healthy,” she said, adding that the mother’s overall healthier lifestyle and eating habits may benefit both the gut bacteria and the weight of their children.

Because the results have yet to be confirmed, Kozyrskyj is not yet ready to recommend consumers buy eco-friendly products. However, she said the study did open her mind to using green products, including DIY vinegar cleaning solutions, in her own home.