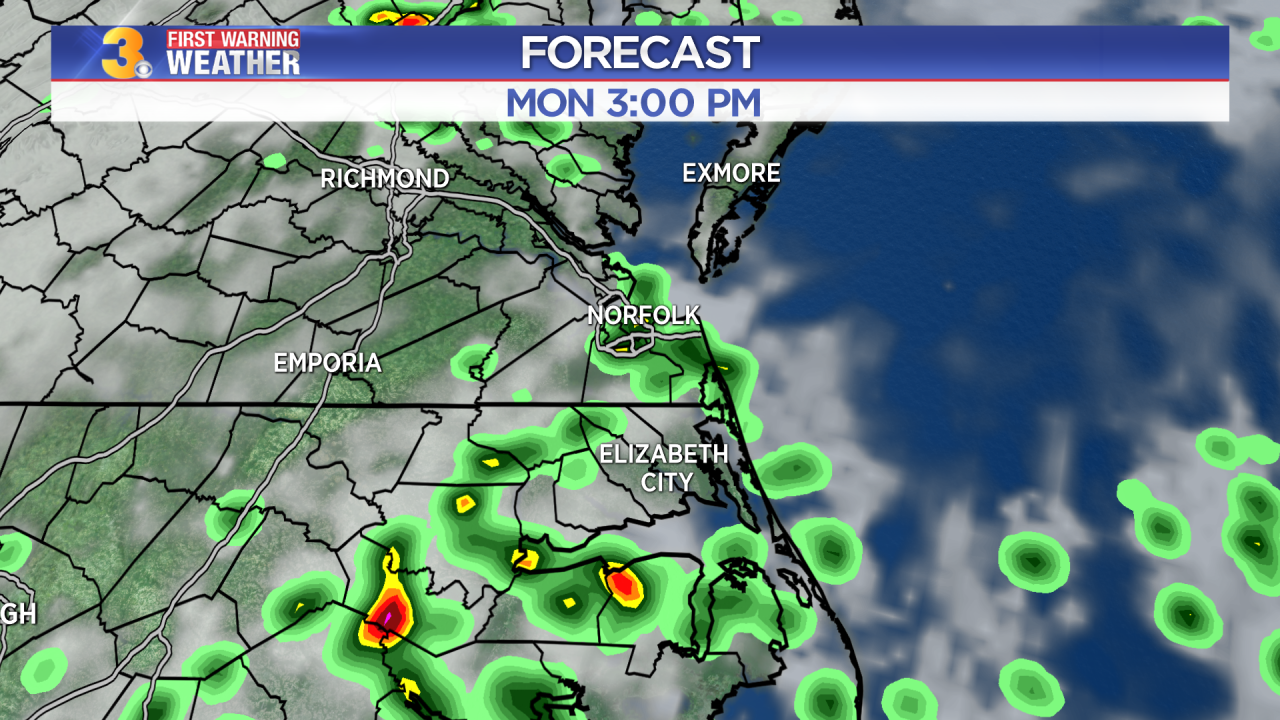 ***Coastal Flood Warning until 1 PM Monday for Gloucester, Middlesex, Mathews, York and until 2 PM for Accomack, Northampton. Minor to moderate level tidal flooding is possible near high tide this morning.

More rain and storms… Highs will warm into the upper 80s this afternoon but it will feel more like the mid 90s with the humidity. We will see a mix of partly to mostly cloudy skies today with scattered showers and storms as a warm front lingers to our north. Severe storms are not expected but thunderstorms and heavy downpours are possible.

A cold front will slowly push into the region over the next few days. Expect a mix of clouds with scattered showers and storms tomorrow and Wednesday. Highs will reach the mid to upper 80s, still above normal for this time of year.

Hurricane Florence will approach the Carolina coastline on Thursday. Based on the current forecast track, we will see widespread rain and very strong winds on Thursday and Friday. Significant flooding is expected with several inches of rainfall combined with coastal flooding and storm surge. We will be fine tuning the timing and impacts through the week.

Florence will weaken once over land but could linger into the weekend.

Hurricane Florence now a category four hurricane. Florence is centered about 575 miles SSE of Bermuda and moving west at 13 mph. A WNW motion with an increase in forward speed is expected during the next couple of days. A turn toward the NW is forecast to occur late Wednesday night. On the forecast track, the center of Florence will move over the southwestern Atlantic Ocean between Bermuda and the Bahamas Tuesday/Wednesday and approach the coast of South Carolina or North Carolina on Thursday.

Maximum sustained winds have increased to near 1305 mph with higher gusts. Florence is a category 4 hurricane on the Saffir-Simpson Hurricane Wind Scale. Further strengthening is anticipated, and Florence is expected to be an extremely dangerous major hurricane through Thursday.

Hurricane Helene is strengthening quickly over the tropical Atlantic. Helene is centered about 375 miles west of the Cabo Verde Islands and moving WNW at 16 mph. A WNW motion with a decrease in forward speed is expected through late Tuesday, followed by a turn toward the NW and NNW on Wednesday and Thursday.

Maximum sustained winds have increased to near 105 mph with higher gusts. Some additional strengthening is expected today, and Helene is forecast to become a major hurricane by tonight. Steady weakening is forecast to begin by late Tuesday.

Hurricane Isaac showing little change in strength. Isaac is centered about 1150 miles east of the Windward Islands and moving west at 14 mph. On the forecast track, Isaac should move across the Lesser Antilles and into the eastern Caribbean Sea on Thursday.

Maximum sustained winds are near 75 mph with higher gusts. Additional strengthening is expected over the next day or two. Weakening is forecast to begin by the middle of the week as Isaac approaches the Lesser Antilles.