This 84-year-old hurricane hunter has flown into the eye of 574 storms. He’s not done yet 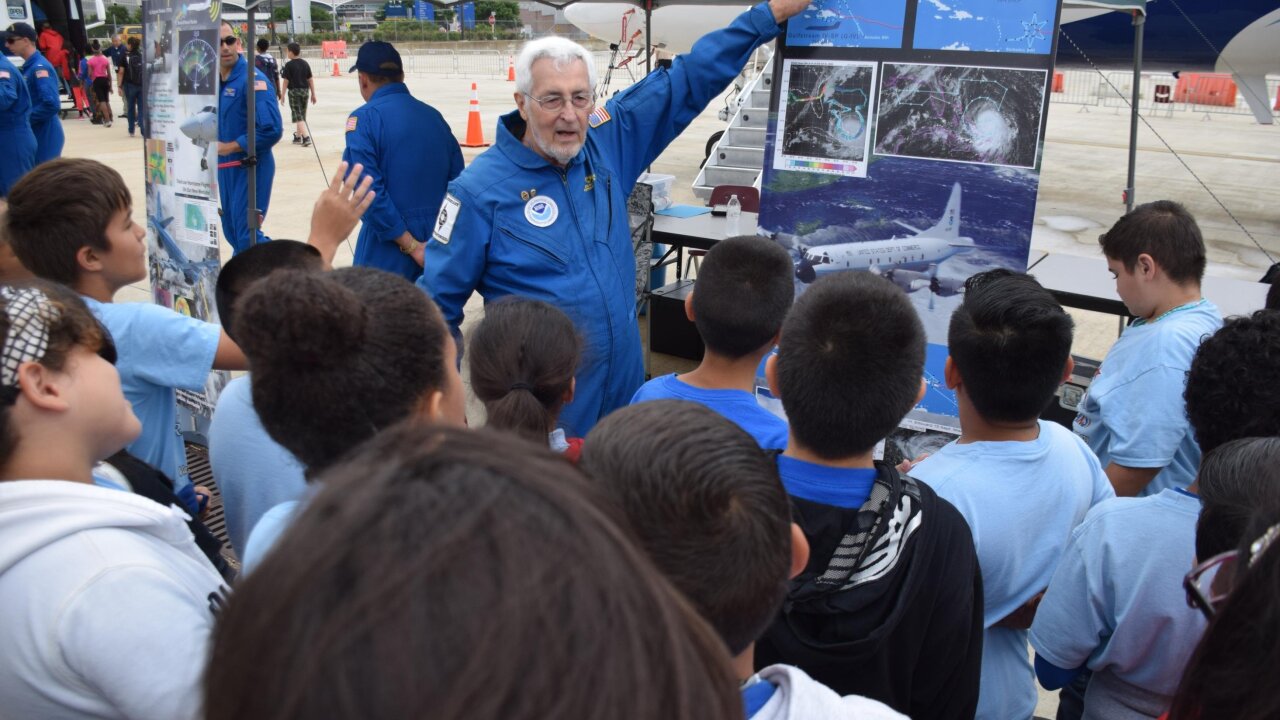 It was Hurricane Inez, a 1966 storm that slammed into the Caribbean, Florida and then Mexico.

But mainly, the 84-year-old remembers just how utterly underwhelming it all was.

“It wasn’t that impressive a storm. So it was kind of (like), ‘Well, that wasn’t too bad,'” McFadden said. “I had heard all these stories about the hurricane hunters and what a fearsome job it was, and all that kinda stuff, and I was just sort of underwhelmed by my first hurricane penetration.”

But that disappointment didn’t stop him from doing it again, and again, and again. More than 50 years later, McFadden heads up the National Oceanic and Atmospheric Administration’s Aircraft Operations Center, the group responsible for flying into hurricanes and getting their meteorological readings.

He has flown into the eye of 574 storms over his career and holds a Guinness World Record for the longest career as a hurricane hunter. In 2016 he was named a 2016 finalist for the Samuel J. Heyman Service to America Medals, an honor bestowed to the best members of the federal workforce.

Hours before the looming landfall of Tropical Storm Gordon, McFadden spoke to CNN about his decades of flying, the time three out of four of his plane’s engines went out on a flight over the ocean, and why his department’s work is so important for the American people.

“What they’re getting in return and what it costs us to fly is hundredfold more important and more valuable to them than they’ll ever know,” McFadden said.

How his job works

The life of a hurricane hunter isn’t just for adrenaline seekers. These scientists are necessary for understanding and predicting hurricanes.

Meteorologists’ forecasts are full of numbers, percentages and predictive models. Those measurements are based on data – wind speed, internal pressure, whether a storm is weakening or strengthening – that are measured by these hurricane hunters.

The scientists and meteorologists on board hurricane hunter flights drop measuring devices into the storm. Those measurements are sent back to the plane and then over to the hurricane center and then off to the public.

And then: voila! CNN displays a detailed storm tracker.

The work is vital and cost-effective for hurricane preparations, McFadden said.

He estimates it costs about $1 million per mile of shoreline to prepare for a storm. Thanks to his team’s expertise and technological advances, hurricane warnings that used to cover a 400-mile stretch of coastline are now down to about 200 miles.

That means, in his estimation, the predictive work of hurricane hunters saves the country $200 million per hurricane.

“I say it’s a cheap price when you compare the cost of our operation to what it costs to just prepare the coastline for a landfalling storm,” he said.

It can be dangerous

To get into the peaceful eye of a storm, hurricane hunters have to fly their planes through all those windy and rainy outer bands and the increasingly dangerous eyewall. The stark difference between the stormy eyewall and the calm eye can create stunning visuals.

But flying into storms over and over again can, of course, be dangerous. A blown engine or lost altitude can be a nerve-wracking experience, and McFadden has his near-death stories.

One such dangerous flight took place on a four-engine plane into a Nor’easter in the North Atlantic in 2007, he said. Take it away, Dr. McFadden:

“And we’re out there flying around in winds that were hurricane force. Winds were 80 knots. And (we’re) doing this satellite calibration validation work.

“A few minutes later, on the same side of the airplane, the other engine did the same thing. (We) shut it down. So now you’re down to two engines. Of course we’ve already turned around and are heading back to St. John’s, but we’re 500-some miles away.

“We’re getting a little nervous, as you can imagine. The plane still flies on two engines. But two minutes later, then the third engine started doing the same thing.

“Now we’re really, really worried because the plane doesn’t fly on one engine. We’re starting to descend and it was a frantic time. Everybody was trying to put on their emergency suits, which was another challenge. …

“You could hear the navigator who was handling the radio give the Mayday signal. If there’s anything more chilling, I don’t know what it is, than to hear somebody – this is not a drill, this is the real thing – yelling out over the radio, ‘Mayday! Mayday! Mayday!’ because you’re the guy that’s in this mayday situation. You’re hundreds of miles from any place and you’re hoping that somebody hears you and responds.

“Fortunately somebody did, but we didn’t need them. Anyway, they did. The Canadians sent out a C-130 (plane). But we got down to about 800 feet I guess, and they were able to restart one of the engines. Then they said, we got that restarted, let’s try the other two, and they actually got all three restarted. And they limped back to St John’s.

“And we got back to St. John’s and landed, pulled into the place where we parked and got out of the airplane.

“You know what a flocked Christmas tree looks like? It’s when you take all this white stuff and throw it on a Christmas tree. The plane was totally white. It was covered with some substance. And we went up, and I licked my finger and wiped the side of the airplane and tasted it, and it was salt.

McFadden wrapped up the story with what must be one of the understatements of his life.

“It’s nice to be sitting here talking about it,” he said.

But most flights are safe

That terrifying flight was far out of the ordinary, though.

“By and large, all our guys that do that are really, really good pilots, and the rest of us in the back of the airplane feel completely safe,” he said. “There are times when you really get nervous about what’s going on, but you know that you’re in the hands of good pilots so that’s good.”

At its best, he said, flying into the eye of a hurricane makes you feel like you’re inside a stadium, surrounded on all sides by high walls of rain and wind.

“It’s an amazing experience,” he said.

McFadden’s team mainly operates P-3 aircrafts, which seat about 16 to 20 people, including pilots, scientists and engineers. The department has two P-3s and both were built in the 1970s. One of the two is currently out of commission as it gets a new set of wings, he said.

The other was expected to fly into Hurricane Gordon – without McFadden – as the storm neared the Gulf Coast on Tuesday night.

The team also operate a high-altitude jet that flies around hurricanes, as well as six smaller planes for conducting other research.

With his responsibilities as chief of the Aircraft Operations Center, McFadden said he hasn’t flown in about two and a half years. Still, he’d like to get back up soon, and no, the octogenarian has no plans to retire.

“(The job) combines three things I like: the weather, travel and airplanes. People say, when are you gonna retire? I say, hey, why should I retire? I’ve got the best life,” he said.

“I don’t have any big hobbies. If I retire, I don’t know what I’d do. What would I do that’s any more fun than what I’m doing now, and more interesting?”