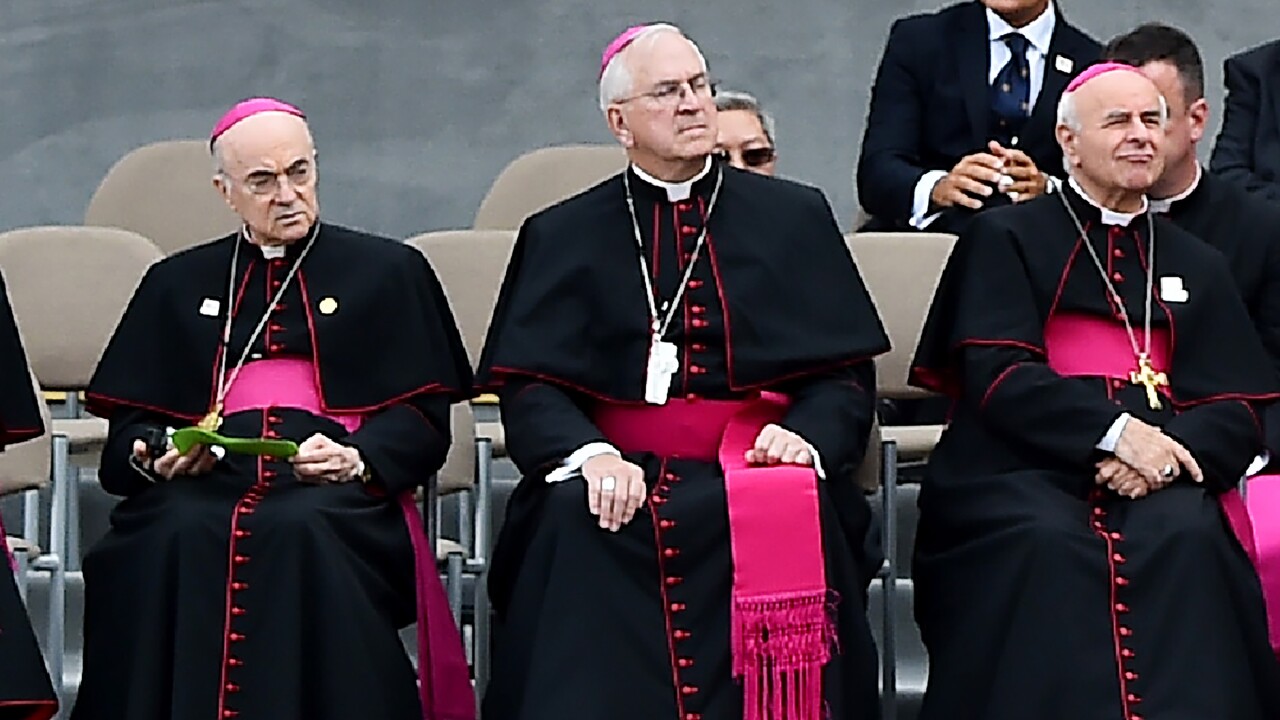 Ambassador to the Vatican Carlo Maria Vigano (L) and Vincenzo Paglia (R) listen to Pope Francis speaking at Independence Hall in Philadelphia on September 26, 2015. – A former ambassador to the Vatican has accused Pope Francis of ignoring sexual abuse claims against prominent US cardinal Theodore McCarrick, who was forced to resign last month. Archbishop Carlo Maria Vigano said that he had told Francis, who is currently visiting Ireland, of the allegations in 2013, but that the pontiff instead lifted sanctions imposed on McCarrick by predecessor Pope Benedict. Vigano’s eleven-page letter was published simultaneously on August 25, 2018 in several conservative Catholic publications in the US. (Photo by VINCENZO PINTO / AFP) (Photo credit should read VINCENZO PINTO/AFP/Getty Images)

A former Vatican ambassador to Washington has called for Pope Francis to resign over his handling of sexual abuse allegations against a prominent cardinal in 2013.

In a statement seen by CNN Sunday, former Archbishop Carlo Maria Vigano said he told the Pope about allegations of sexual abuse against high-profile American Cardinal Theodore McCarrick five years ago, but that the Pontiff did nothing about it.

“He [Pope Francis] knew from at least June 23, 2013 that McCarrick was a serial predator,” Vigano said in the lengthy statement dated August 22, adding, “although he knew that he was a corrupt man, he covered him to the bitter end.”

“It was only when he was forced by the report of the abuse of a minor, again on the basis of media attention, that he took action [regarding McCarrick] to save his image in the media,” Vigano continued.

A source close to Vigano confirmed the letter is genuine. CNN has so far not received a response from the Vatican.

Vigano, who retired in 2016 at age 75, called for the Pontiff to resign over his failure to act. “Pope Francis must be the first to set a good example to Cardinals and Bishops who covered up McCarrick’s abuses and resign along with all of them,” he said.

McCarrick, 88, who once led the Archdiocese of Washington and was a force in American politics, resigned last month after a decades-old allegation of sexual abuse of a teenage altar boy. The Pope also ordered McCarrick’s’ suspension from public ministry.

“Cardinal Wuerl, well aware of the continuous abuses committed by Cardinal McCarrick and the sanctions imposed on him by Pope Benedict, transgressing the Pope’s order also allowed him to reside at a seminary in Washington D.C.,” said Vigano.

“In doing so, he put other seminarians at risk,” he added.

Wuerl rejected Vigano’s allegation, and in a statement published by the Catholic News Agency on Sunday says he “did not receive documentation or information from the Holy See specific to Cardinal McCarrick’s behavior or any of the prohibitions on his life and ministry suggested by Archbishop Vigano.”

Vigano’s statement comes at a delicate time for Pope Francis, who is on a visit to Ireland where he has been grappling with the fallout of a Pennsylvania grand jury report into clerical sexual abuse spanning decades, while also meeting with survivors of Ireland’s own sex abuse scandal.

The Pennsylvania report found that more than 1,000 minors had been sexually abused by more than 300 Catholic priests over seven decades.

In an unusually blunt letter released by the Vatican last week, the Pope directly referred to the Pennsylvania report and acknowledged the Catholic Church’s failure to act, adding “we showed no care for the little ones; we abandoned them.”

On Saturday, the Pope again spoke in Dublin of his shame over the “appalling crimes” of historic child abuse in the Catholic Church and said outrage was justified, although he did not mention the Pennsylvania scandal specifically.

Meanwhile, Irish Prime Minister Leo Varadkar, who spoke ahead of the Pope on Saturday, did not skirt the current abuse revelations that have emerged in Pennsylvania.

“In recent weeks, we have all listened to heartbreaking stories from Pennsylvania of brutal crimes perpetrated by people within the Catholic Church, and then obscured to protect the institution at the expense of innocent victims,” he said. “It is a story all too tragically familiar here in Ireland.”

Pope Francis continues his 32-hour visit to Ireland with a Sunday Mass at Phoenix Park in Dublin, with around 500,000 people expected to attend. Thousands of people are also expected to take to the streets in protest.

As the Pope addresses the faithful, a silent vigil will take place in the town of Tuam, where 800 children’s bodies were discovered last year at a former Catholic church mother-and-baby home.