Lane weakens to a tropical storm, but landslides and flooding are still a threat 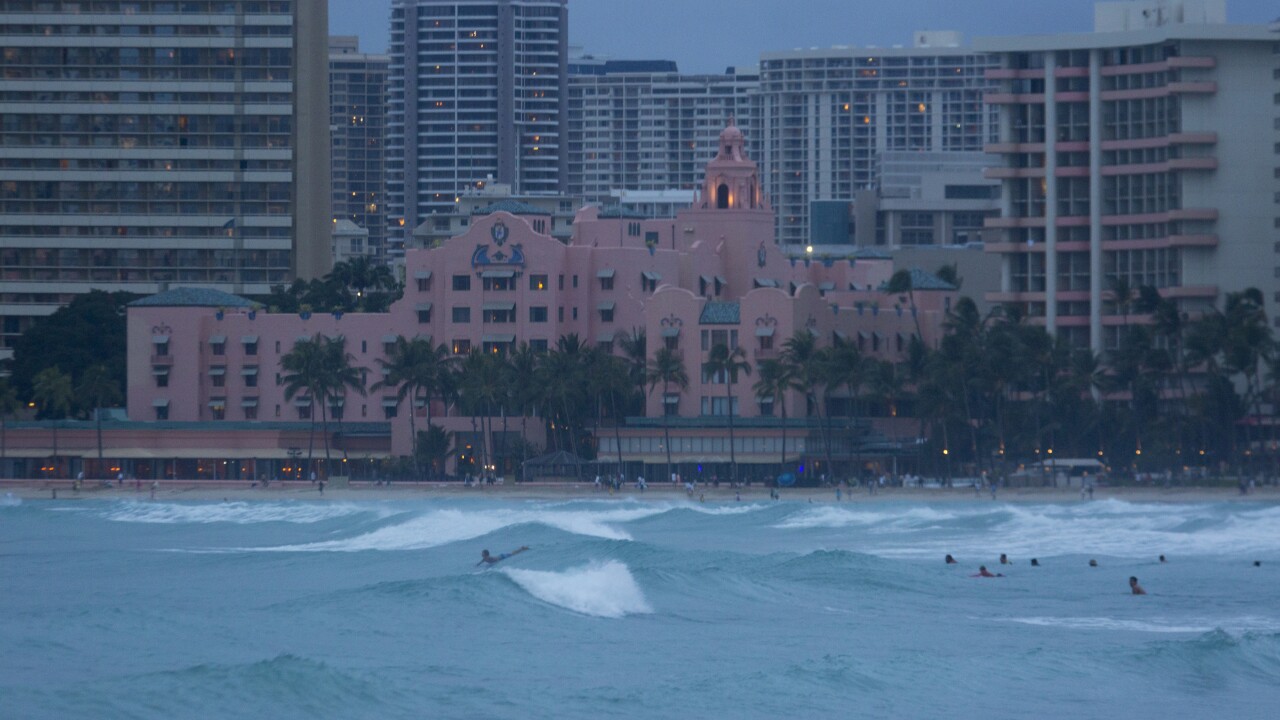 HONOLULU, HI – AUGUST 24: Despite warnings of dangerous rip currents and the order to stay out of the ocean, both visitors and locals continue to play in the stormy sea in front of the Royal Hawaiian Hotel brought in by Hurricane Lane as seen from the East end of Waikiki Beach on August 24, 2018. (Photo by Kat Wade/Getty Images)

Hawaii residents breathed a sigh of relief as Hurricane Lane disintegrated into a tropical storm, but authorities warned its thrashing winds and relentless rain remain a threat into the weekend.

Lane dumped more than 40 inches of rain in some parts of the Big Island over several days, sending residents fleeing life-threatening flash flooding and landslides.

It weakened to a tropical storm Friday, a major downgrade for what was a Category 3 hurricane just a day earlier.

“Lane is now a Tropical Storm with max winds of 70 mph and still poses a threat for flooding,” the National Weather Service tweeted.

The center of the storm is not expected to come ashore though the eye wall could pass dangerously close to the central islands, including Oahu and Maui, in the coming days.

But it’s the Big Island of Hawaii – the easternmost island in the chain – that has been hammered hardest by rain. Lane’s threat came as Maui residents battled two brush fires, including one that caused evacuations in a resort area.

The islands ‘dodged a bullet’

Oahu Mayor Kirk Caldwell said while the islands “dodged a bullet” and will not face the full fury of a Category 3 hurricane, residents and tourists should remain vigilant as heavy rains, flash flooding and landslides are still a threat.

“We anticipate lots of rain in the coming hours,” the governor said.

As it moves on a slow motion northwest before it heads west Saturday, Lane will cause storm surges up to 4 feet above normal tides.

“This path will take Lane away from the islands,” the weather service said. About 10-40 inches of rain is forecast in some areas through the weekend, which could trigger even more landslides and flash flooding. Pahoa had 3.36 inches of rain in one hour alone Friday night.

A mix of a storm surge and waves will raise water levels up to 4 feet above normal tides along shores near Lane’s center, forecasters said.

Weakening is forecast through the weekend, with Lane expected to become “a remnant low” by late Saturday or Sunday, the Central Pacific Hurricane Center said.

Despite the flooding and landslides making headlines nationwide, some tourists were unfazed, with nearly 300,000 currently visiting the state, US Sen. Mazie Hirono said.