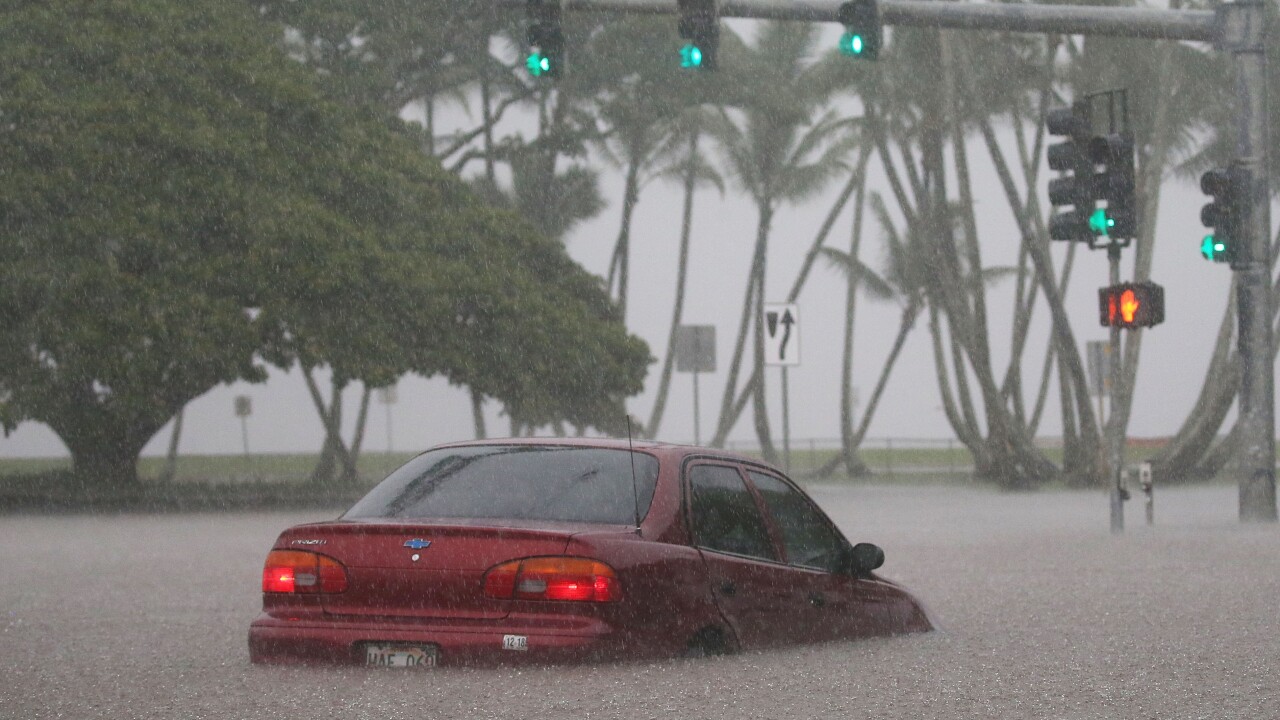 HILO, HI – AUGUST 23: A car is stuck partially submerged in floodwaters from Hurricane Lane rainfall on the Big Island on August 23, 2018 in Hilo, Hawaii. Hurricane Lane has brought more than a foot of rain to some parts of the Big Island which is under a flash flood warning. (Photo by Mario Tama/Getty Images)

Hurricane Lane is inundating parts of Hawaii with life-threatening amounts of rain as it crawls toward the state, and the storm’s most powerful winds are expected to whip the central islands Friday night.

The Category 2 storm‘s center — about 180 miles south of Honolulu early Friday — will move dangerously close to the central islands, including Oahu and Maui, on Friday night.

But it’s the Big Island — the easternmost island in the chain — that has been hammered hardest by rain. More than 31 inches fell in one spot over the past few days, causing serious flooding, landslides and road closures.

Lane will continue to pose numerous hazards across parts of the islands into the weekend, including hurricane-force winds, storm surges up to 4 feet above normal tides, and 10 to 40 inches of rain, forecasters say.

Hurricane conditions, including winds of at least 74 mph, will start in parts of the Oahu, Maui, Lanai and Molokai islands Friday, the Hurricane Center said.

The storm may weaken Friday and Saturday and no longer appears to be on a track that would bring its powerful center over land. But it still is expected to be remain a dangerous hurricane as it approaches the islands Friday and Saturday, forecasters say.

Lane’s approach came as people on Maui dealt with a separate hazard: Two brush fires were burning, one that was forcing evacuations around the resort area of Lahaina.

‘It’s going to hang around for a while’

As the hurricane got closer to Hawaii, Gov. David Ige urged residents to set aside two weeks’ worth of food, water and other necessities.

“Lane, while it has been downgraded, is wide and very moist. And it’s going to hang around for a while as it moves because it is moving slowly,” Honolulu Mayor Kirk Caldwell said. “And that is why we are taking so much precaution here.”

Ryan Leinbach of Kailua-Kona said he “brought everything that might fly” indoors and stocked up on wine, cheese and coffee.

“Just hanging out until this evening when things are really supposed to happen,” he said Thursday.

Hilo resident Regina Lola Miller stayed indoors and kept a wary eye on a nearby stream.

“We are just trying to be cautious and be prepared,” she said. “If the pond overflows, then it will be bad. It has before.”

In some areas, officials are blaring sirens and blasting speakers to warn residents of the dangers.

Despite the flooding and landslides making headlines nationwide, some tourists were unfazed, with nearly 300,000 currently visiting the state, US Sen. Mazie Hirono said Thursday.

State and federal officials are bracing for the storm, with Hawaii opening emergency shelters, closing some public schools for the rest of the week, and placing nonessential government workers on leave.

The Federal Emergency Management Agency said it has prepared food, water, generators and other commodities to help with emergency resources.

Up to 40 inches of rain expected

About 10-40 inches of rain is forecast in some areas through the weekend, which could trigger even more landslides and flash flooding.

A mix of a storm surge and waves will raise water levels up to 4 feet above normal tides along shores near Lane’s center, forecasters said.

“This is expected to result in significant beach erosion and overwash onto vulnerable coastal roadways today through Saturday as Lane makes its closest approach,” Ige said.

Excessive rainfall will lead to dangerous flash flooding, landslides and mudslides in areas that are already drenched. Forecasters believe the storm will turn west — away from the islands — but are uncertain when that will happen.

“If residents do not evacuate, first responders may not be able to reach them if the situation becomes too hazardous,” the statement said.

A hurricane warning is in effect for Maui County (which includes all of the islands of Maui, Lanai and Molokai) and Oahu — meaning hurricane conditions are expected there. The Big Island is under a tropical storm warning, and the islands of Kauai and Niihau are under a hurricane watch.

Lane’s landfall would be rare

The Central Pacific gets few hurricanes and tropical storms; the Atlantic or Eastern Pacific usually see many more named storms.

Hawaii is a small target in a vast ocean, and isn’t often threatened. Hawaii gets a named storm within 60 miles of its coastline about once every four years on average, forecasters say.

Lane could become a further rarity if its center crosses land. Only two hurricanes have made landfall in Hawaii since the 1950s: Hurricane Dot in 1959, and Hurricane Iniki in 1992.