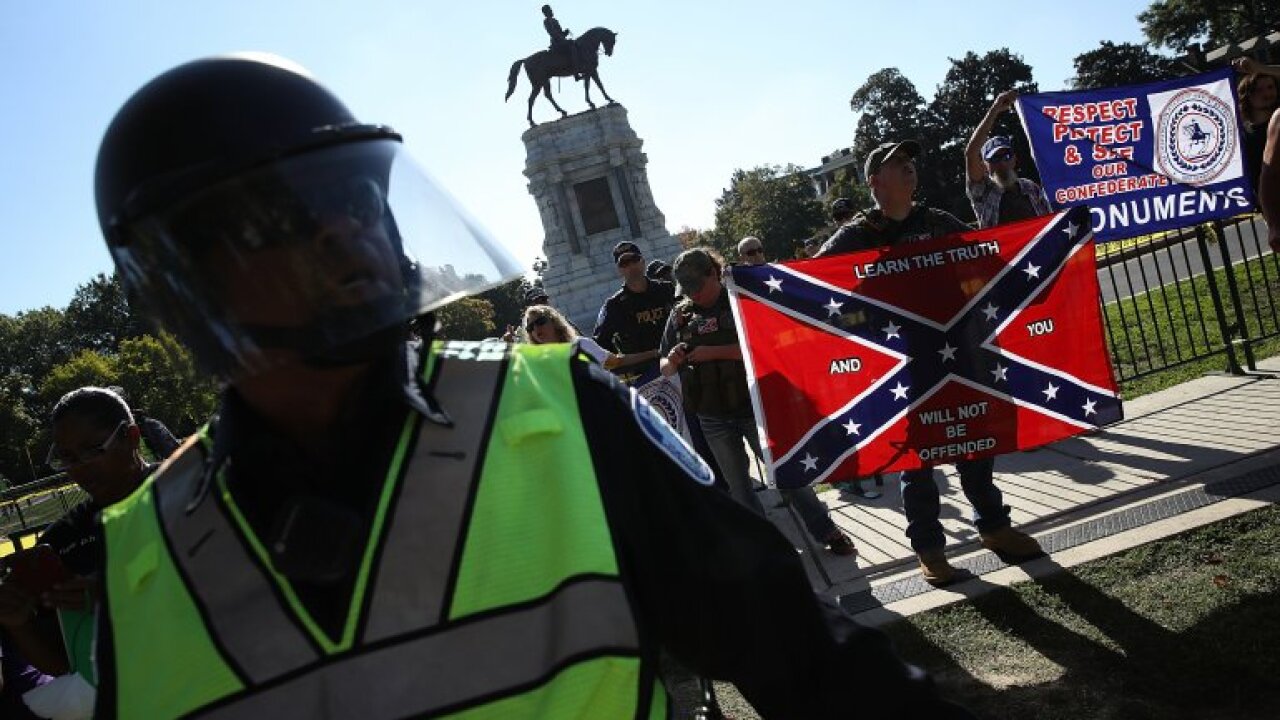 Richmond police keep members of the Tennessee based group “New Confederate State of America” separated from counter protesters September 16, 2017 in Richmond, Virginia. The group held a protest in support of retaining the statue of Confederate Gen. Robert E. Lee that is located on Richmond’s Monument Avenue. (Photo by Win McNamee/Getty Images)

The event on August 19 from 12-4 p.m. is focused on the Jefferson Davis Monument, following the Monument Avenue Commission’s recommendation that the monument be removed.

“Of all the statues, this one is most unabashedly Lost Cause [sic] in its design and sentiment,” the commissioners determined in a 117-page report, after a year-long review and public engagement process examining the Confederate statuary of Monument Avenue.

The commission was established by Mayor Levar Stoney, just days before a Unite the Right nationalist rally erupted in violence in Charlottesville, killing one person and injuring dozens. After Charlottesville, Stoney expanded the scope of the commission to consider removal and/or relocation of monuments. He expressed his personal belief that the monuments should be removed and/or relocated.

Click here for our full coverage on the Charlottesville protest

The August rally will be led by the Virginia Task Force III% – Dixie Defenders. They are supported by the CSA II: The New Confederate States of America group, who have a rally planned in Richmond in September.

“This is a great group of Confederates and we fully support their mission to save this monument and all monuments,” the group wrote on Facebook.

CSA insists that these events are not hate events, and that acts of hatred won’t be tolerated. The neo-Confederate group, based out of Tennessee, has of late expressed interest in using Richmond’s Monument Avenue to promote their agenda. They have previously staged three rallies in the city: in September and December 2017 and again in May 2018.

Their event planned for September 15 from 10 a.m. to 4 p.m. is the fourth rally. The group wrote on Facebook that they are honoring the one-year anniversary of their last event.

Neither group has a permit. The CSA group encouraged folks to bring flags but emphasized the flags on poles and signs on sticks are not allowed.