Getting rid of the former USS Enterprise could cost the Navy more than $1.5 billion 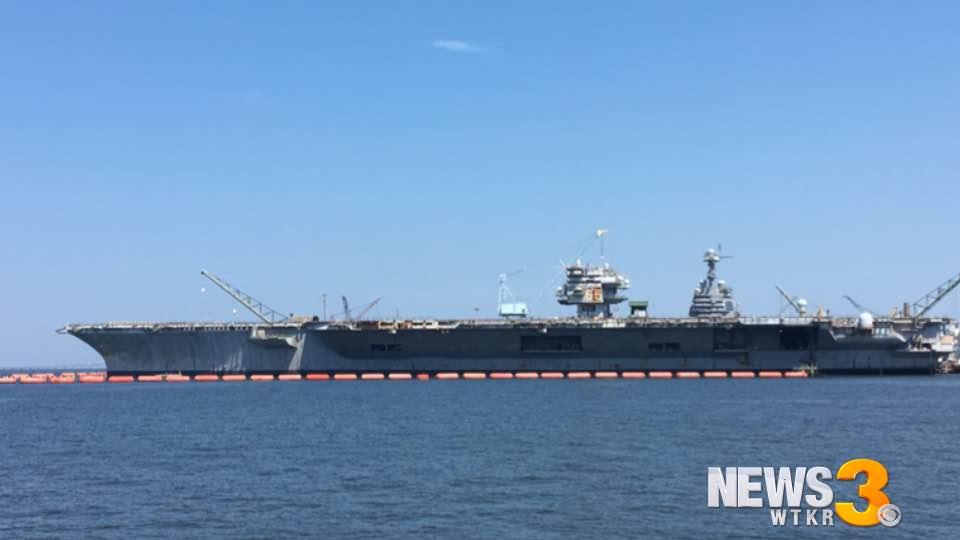 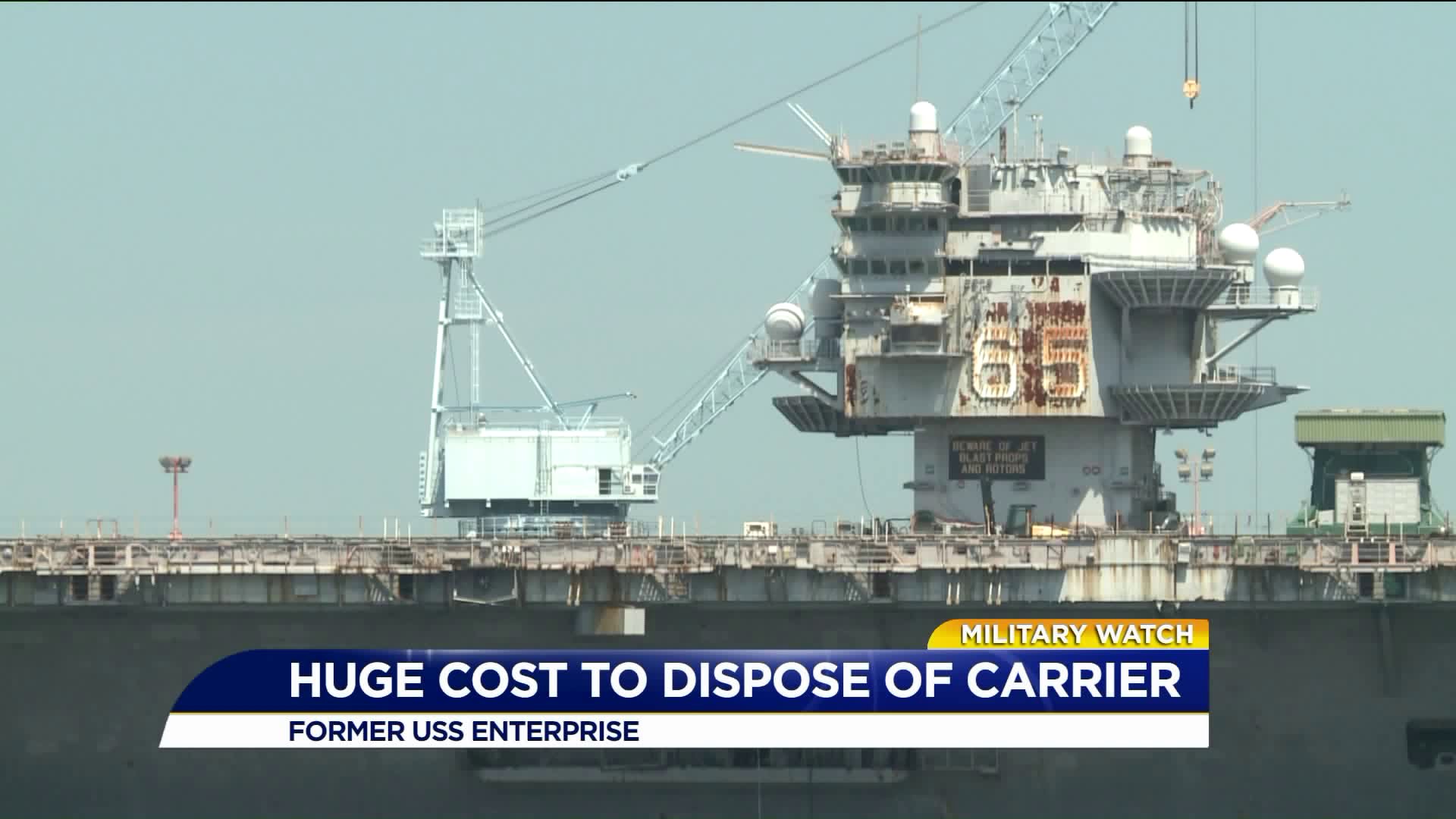 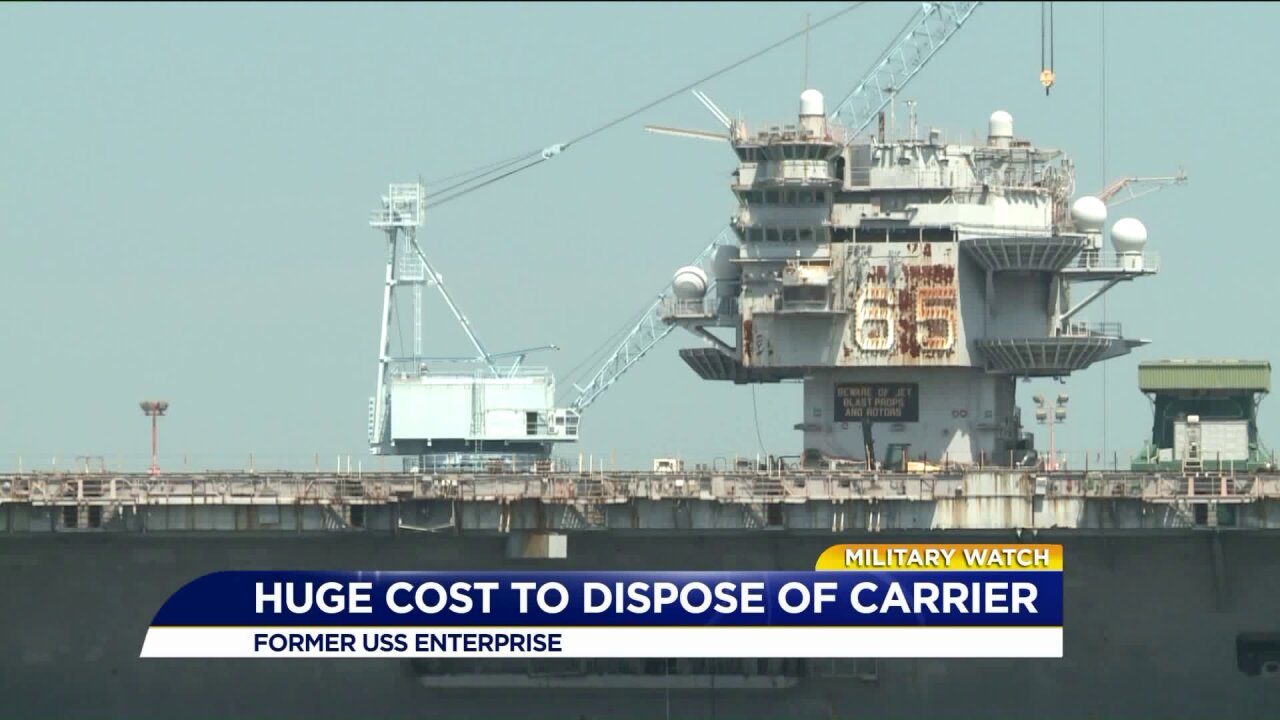 NEWPORT NEWS, Va. - The cost to get rid of the former USS Enterprise could exceed more than one billion dollars according to new findings from a government watchdog agency.

The Enterprise, nicknamed the Big 'E,' was the world's first nuclear-powered aircraft carrier when it was commissioned November 25, 1961. At the time, the Enterprise was also the longest ship in the world, at more than 1,100 feet.

With deployments to the Mediterranean Sea, Pacific Ocean and the Middle East, Enterprise served in nearly every major conflict, returning to Naval Station Norfolk in 2012 for the final time before inactivation.

On February 3, 2017, the Enterprise was formally decommissioned during a ceremony at Newport News Shipbuilding, the same shipyard where it was built.

In April of this year, the shipyard announced inactivation work had finished, noting the physical work was completed in December 2017 with government contracting office review and certification of the paperwork taking several additional months.

During the process, which began in 2013, more than 1,000 shipbuilders at Newport News Shipbuilding defueled the ship’s eight nuclear reactors, deactivated the propulsion systems, and prepared the hull for final tow.

Since inactivation work was finished, the Enterprise has sat at a pier along the James River at Newport News Shipbuilding, awaiting its final fate.

A report published August 2nd from the Government Accountability Office found that costs to dismantle and dispose of the ship have now soared and could cost the Navy more than $1.5 billion.

The Navy is assessing two options. The first would involve the Puget Sound Naval Shipyard in Washington state dismantling the section of the ship that contains the eight defueled reactors and all other nuclear-related material.

The shipyard would prepare that material for disposal at a facility in Hanford, Washington. The non-nuclear parts of the Enterprise would then be handled by a commercial company.

Under this plan, the preliminary cost estimates range from $1.05 billion to $1.55 billion, with a 10 year span for the work that wouldn't begin until 2034.

The second option would involve a commercial company, or several companies, handling the entire process. The cost estimates for that range from $750 million to $1.4 billion, with a five year span for the work starting in 2024.

The commercial option could cost less for the Navy, but there is a dispute between two regulatory agencies which is holding up the process.

The Naval Nuclear Propulsion Program and the Nuclear Regulatory Commission are at odds with who has authority to dispose of the Enterprise in the commercial sector.

The GAO report points out that the dismantlement and disposal of the Enterprise will set precedent for future nuclear-powered aircraft carriers, as the Nimitz-class ships will begin to leave the fleet as more Ford-class carriers are built.

In the Department of Defense response to the report, Assistant Secretary of Defense Kevin Fahey writes "I would like to commend the GAO on the thoroughness of this review. This is a complex topic that has not been previously addressed."

He also noted that the Nuclear Regulatory Commission and Naval Nuclear Propulsion Program are trying to come to an agreement on their regulatory disagreement.

The Enterprise name will live on on a Ford-class aircraft carrier, CVN-80, being built in Newport News.

You can read the entire report from the GAO here.