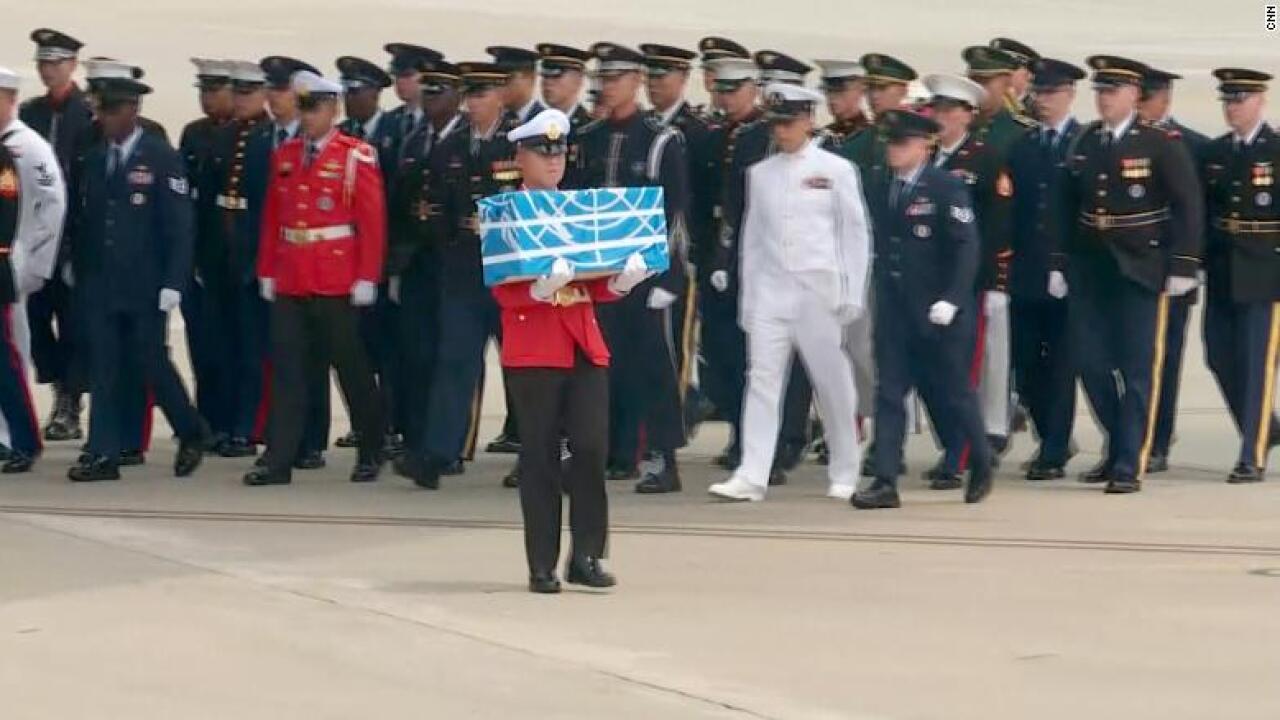 Dozens of cases believed to hold the remains of American service members killed during the Korean War are to due to be flown to the United States on Wednesday.

The 55 boxes, which North Korea returned last week, are scheduled to receive a formal send off at South Korea’s Osan Air base before being loaded onto a C-17 transport plane on Wednesday afternoon and sent to a military laboratory in Hawaii for identification.

“This is a great first step in terms of bringing a bunch of fallen Americans home,” said Rear Admiral Jon Kreitz, the deputy director of the agency in charge of identifying the remains, the Defense POW/MIA Accounting Agency (DPAA).

“We look forward to potentially pursuing (remains recovery) operations in North Korea in the future and we’re very hopeful. Again, this is just a great first step in building some confidence and building a relationship.”

The remains are being repatriated as part of a historic agreement last month between US President Donald Trump and North Korean leader Kim Jong Un.

During their meeting in Singapore, the first ever between sitting leaders of their respective countries, both Kim and Trump committed to recovering the remains of US service members who died during the Korean War and whose bodies were never found.

Preliminary testing revealed the remains appear to be those of Korean War combatants, and were likely American, according to John Boyd, an anthropologist at the DPAA.

He called it one of the “largest unilateral turnovers” of remains ever received.

“The remains are consistent with remains that we have recovered in North Korea through our own recovery efforts in the past,” said Boyd.

“There’s no reason at this point to doubt that they do relate to Korean War losses.”

Boyd confirmed earlier reports that only one dog tag was returned with the potential remains. He said the family of that service member has been notified and will received the dog tag “in the coming weeks.”

However, Boyd cautioned that it was unclear if that veteran’s remains are among those returned.

The process of identifying the remains could take months or years, experts say, and it’s unclear what is inside each box.

North Korean army officials who returned the remains expressed concern about bones being mixed up, said Boyd. He told CNN after the press conference it’s likely there will be more than 55 individuals in the 55 boxes being sent to Hawaii.

The remains were handed over by the Korean People’s Army (KPA) in the North Korean city of Wonsan before being transported to South Korea on Friday, the anniversary of the armistice that paused hostilities in the Korean War, which lasted from 1950 to 1953.

Boyd also confirmed that none of the remains included animal bones, which he said can easily happen by accident.

Angela Kerwin, the consul general US Embassy in Seoul, said no payment was made to the North Koreans for the remains.

US Vice President Mike Pence is traveling to Hawaii to greet the return of the remains as they touch down on US soil.

Joining the vice president are the children of two US service members who never returned from the Korean War. Pence is also the child of a Korean War veteran. His father, Edward J. Pence, Jr., received a Bronze Star for his service.

The United States has tried multiple times over the years to negotiate the return of the remains of those killed in North Korea during the Korean War while fighting on behalf of the United Nations command.

According to the US Department of Defense, 7,697 personnel from the Korean conflict are still unaccounted for, of whom 5,300 are believed to be North of the demilitarized zone that separates North and South Korea.

The remains of 340 soldiers have been handed over by North Korea since 1990. The US halted joint efforts with North Korea on recovering remains during the George W. Bush administration as talks with Pyongyang faltered.

Analysts consider the issue to be low-hanging fruit for Pyongyang and Washington negotiators — something that both sides could easily agree to in order to establish a modicum of trust and good will as they continue to negotiate over North Korea’s nuclear weapons program.

Critics say Trump and Kim’s agreement fell woefully short on specifics when it comes to Pyongyang’s nuclear warheads and ballistic missiles, but Trump and US Secretary of State Mike Pompeo have preached patience.