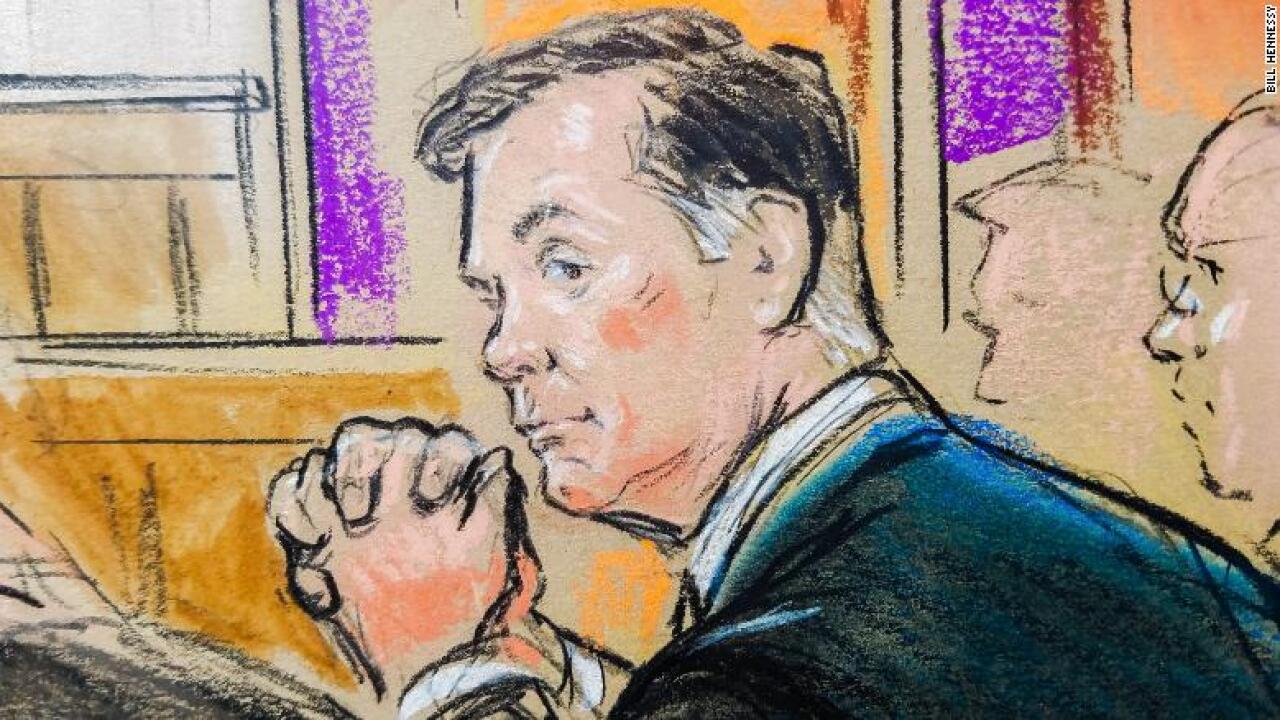 As Mueller’s team made its case against Trump’s former campaign chairman in the courtroom, the President took to Twitter to call the prosecution a “hoax” and claim that Manafort worked for the campaign “for a very short time.”

Manafort’s trial is the first case Mueller’s team has taken before a jury, where they are charging Manafort with 18 counts of violating tax and banking laws. Manafort has pleaded not guilty to all charges.

The trial began Tuesday with prosecutors accusing Manafort of violating the law in order to fund an extravagant lifestyle, including purchases of real estate, cars, a $21,000 watch and a $15,000 jacket “made from an ostrich.”

His defense team made clear they plan to pin the blame on Manafort’s longtime deputy, Rick Gates, who is expected to testify during the trial.

The President is paying close attention to TV coverage of the trial and has his legal team giving updates on developments, sources tell CNN, and began the day by blasting the investigation: “This is a terrible situation and Attorney General Jeff Sessions should stop this Rigged Witch Hunt right now, before it continues to stain our country any further. Bob Mueller is totally conflicted, and his 17 Angry Democrats that are doing his dirty work are a disgrace to USA!”

In a second tweet, Trump wrote: “Paul Manafort worked for Ronald Reagan, Bob Dole and many other highly prominent and respected political leaders. He worked for me for a very short time. Why didn’t government tell me that he was under investigation. These old charges have nothing to do with Collusion – a Hoax!”

Judge T.S. Ellis made his own connection to the larger Russian investigation with an interesting comparison of “oligarchs” to prominent US political donors.

Before the jury entered the room on Wednesday, Ellis urged both sides to avoid using the term “oligarch” when describing Manafort’s powerful patrons in Ukraine. Ellis told Mueller’s team not to give jurors the implication that oligarchs were criminals.

In making his point, Ellis, who is known as a sometimes colorful judge, even invoked two prominent US political donors.

“Mr. Soros would then be an oligarch … so would Mr. Koch … but we wouldn’t use that term,” Ellis said, referring to Democratic megadonor George Soros and the one of the billionaire Koch brothers, whose influential network supports Republican candidates.

Matthew Mikuska, the FBI agent who raided Manafort’s home last year, testified that he and other agents gathered outside Manafort’s door shortly after 6 a.m., then knocked on three separate occasions and announced that the FBI was there to execute a search warrant.

When nobody answered the door, the agents used a key they already had and entered the condo, Mikuska said. When they walked in, they saw Manafort standing nearby. The agent testified he was not aware how the FBI agents had the key.

Some news reports following the July 2017 search suggested that it was “no-knock raid,” but Mikuska disputed that notion.

Mikuska told the jury that Manafort’s name was on several documents found showing millions of dollars in loan agreements and wire transfers invoices.

His testimony was the first moment in the trial where prosecutors have gotten to the meat of their argument — that Manafort knowingly signed several kinds of false financial documents.

One document seized during the search was a loan agreement with Banc of California with Manafort listed as the applicant. This bank is among the financial institutions victimized by Manafort’s the alleged bank fraud.

Another document appears to show a wire transfer with Manafort’s name on it with a $3 million balance. That document said “wire into our account,” Mikuska said.

Other documents with Manafort and his wife Kathleen’s names on them involve First Nationwide Title insurance and Federal Savings Bank for a property Manafort purchased in Brooklyn. Kathleen Manafort is not charged with a crime and has attended every hearing for Manafort as a spectator. She was in the courtroom Wednesday.

Consultant first witness of the day

He spoke about his work in Ukraine with Manafort for former Ukrainian President Viktor Yanukovych and his political party, the Party of Regions. Rabin previously worked alongside Manafort and Tad Devine, who testified Tuesday about Manafort’s work in Ukraine.

Prosecutor Greg Andres said the witnesses are meant to establish for the jury the extent of the work Manafort did in Ukraine, up until Yanukovych’s ouster in 2014. Yanukovych has since fled to Russia.

Secret payments prosecutors allege that Manafort received from Yanukovych and the Ukrainian oligarchs who backed him are key to the special counsel’s case. Manafort’s team has attempted to fight some of the evidence the prosecutors want to use in explaining Manafort’s Ukrainian connections. Ellis has not yet ruled on whether they can use all of that evidence.

Defense attorney Richard Westling asked Rabin whom he sent invoices to at Manafort’s company for his Ukrainian TV ad work. Rabin said they first went to an assistant at the company, then to Gates.

“Sounds like he handled a lot of logistics and business issues,” Westling said.

Rabin also testified that Manafort himself paid him by bank wires and other forms of payment for his work, and at one point Manafort asked Rabin to attend a speech of the Ukrainian Party of Regions billionaire backer Rinat Akhmetov.