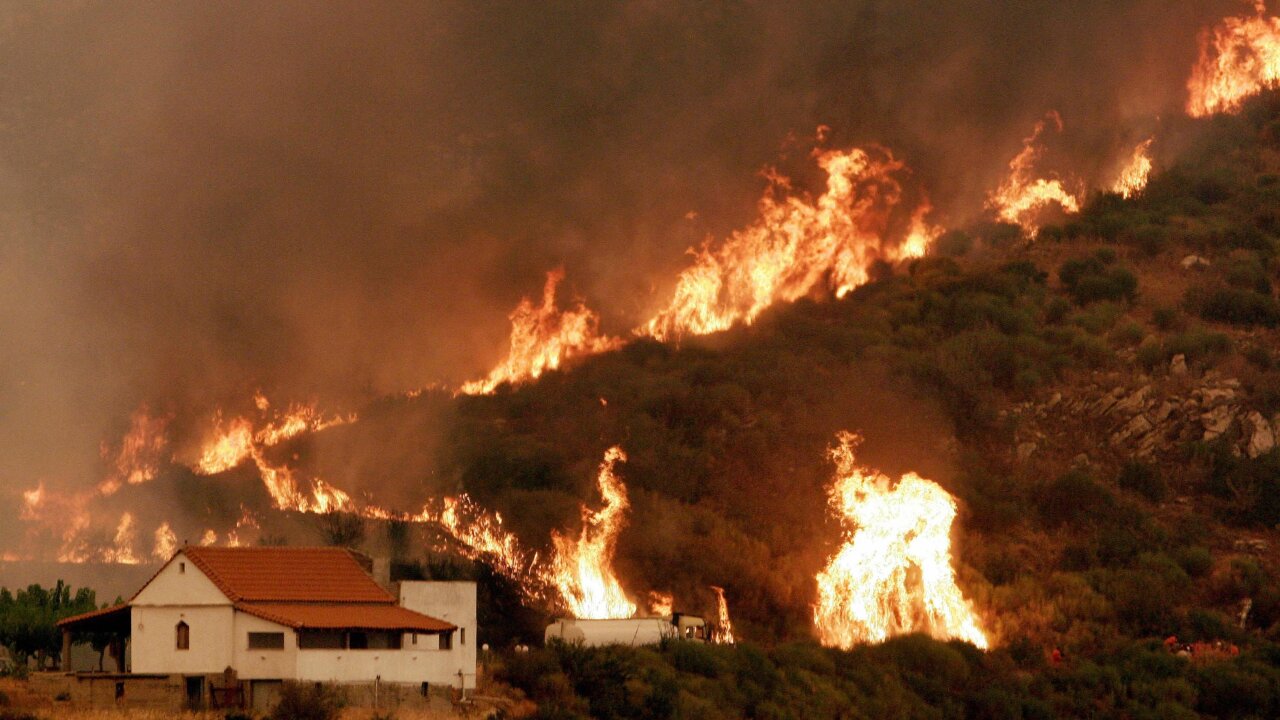 Fires across Greece caused dozens of deaths in 2007. Demetres Karavellas says that few lessons were learned from that disaster.

Fires across Greece caused dozens of deaths in 2007. Demetres Karavellas says that few lessons were learned from that disaster.

There are “serious indications of arson” in one of several Greek wildfires that killed more than 80 people this week, authorities said Thursday.

Nikos Toskas, deputy minister for citizen protection, said the belief is based on satellite images and ground inspections by police and fire officials at the scene of a deadly blaze that started in the town of Penteli in east Attica.

More than 15 fires broke out on three fronts in that part of southern Greece on Monday afternoon, according to government spokesman Dimitris Tzanakopoulos, who described the challenge to firefighters as unprecedented.

The mayor of the municipality where more than 80 people lost their lives to wildfires has admitted that mistakes were made in the response to the crisis, telling CNN that no evacuation order was given and that the scale of the fire was “underestimated.”

For full coverage on the Greece wildfires, click here.

Vagelis Bournos, mayor of Rafina-Pikermi, said that although weather conditions including very strong winds had played a major role, human error was partly to blame for the deaths, citing the lack of a warning as well as longer-term problems including poor urban planning and the impact on public services of years of austerity.

“We might have had less victims with a well-organized evacuation plan but when the fire began in the municipality of Penteli there was no evacuation order for the east part (of Attica) because of the direction of the wind,” Bournos told CNN in an interview Wednesday, adding: “The fire was underestimated.”

But the mayor also defended the decision not to evacuate Mati and the surrounding coastal villages, where hundreds of homes were gutted in the blaze that tore through the area Monday.

“Citizens do not follow evacuation plans but they stay behind to protect their households,” he said.

“Of course there is anger due to the fact that there are victims. But the same people who are angry now, when the evacuation order would have been issued, they would have stayed back and tried to protect their houses. So victims would still be there, a smaller number, but still.”

A number of bodies were found in cars and close to the sea, however, suggesting that many residents did attempt to flee. Hundreds more made it to the beaches and rocky coastline, some waiting in the sea for hours before being rescued.

Demetres Karavellas, director general of WWF Greece, which has warned for years of the deadly threat posed by wildfires and often advises local authorities on how to regenerate areas after fires, described the mayor’s reasoning as “a lame excuse.”

Bournos admitted that there was a window of time in which an evacuation order could have been issued, but it was missed. By the time the blaze was close to Mati, “practically, there could not have been an evacuation,” he said. “The decision would have had to have been made a couple of hours earlier.”

“We could have made better decisions for sure,” he said.

‘An accident waiting to happen’

Bournos’ admissions also suggest a lack of coordination in the response, which Karavellas said is a chronic problem across Greece.

“Coordination has always been an issue,” he said. “We saw this in the wildfires of 2007 which was the last fire that had such a high death toll. Back then, we saw the same situation we see now – a problem of coordination when the fire breaks out: no evacuation plan in place and nobody centrally coordinating.”

A Mati resident who did not want to be named out of fear he would get in trouble with the local authorities told CNN on Wednesday that locals had been requesting preparedness plans for wildfires for several years to no avail. “This was an accident waiting to happen,” he said.

Bournos confirmed that residents had made such requests and said that plans had been produced by local volunteer firefighting organizations, but only for smaller-scale scenarios.

The geography of Mati and the surrounding area is also emerging as a key factor in the high death toll. Many houses were built haphazardly and with little regulation in forested areas and were therefore extremely vulnerable as fire ripped through the dry woodland, which consisted mostly of highly flammable pine trees.

Added to that, roads in the area are narrow and unsuited for large numbers of cars, according to Bournos.

“We are talking about a densely populated area that was built without any urban planning,” Bournos said. “Streets were not designed for such heavy traffic … four thousand households and their residents tried to use streets that couldn’t fit them all in.”

Residents spoke of being unable to leave the area by car as the fire approached because of congested roads. Photographs taken later showed streets blocked by abandoned, burned-out cars, some with doors left open, suggesting people who were unable to drive out of Mati had decided to flee on foot instead.

Asked if authorities would be more prepared in the future if a similar fire were to hit the Mati area again, Bournos said, “There is nothing left to be burned now. Nature and houses have been totally destroyed. We are here, committed to rebuilding everything the way it was, but now with infrastructure.”

Bournos cited the lack of sufficient firefighting forces as a problem. A second set of fires that broke out almost simultaneously in Kineta, around 80 kilometers (50 miles) from Mati on Attica’s western coast, drew resources, Bournos said, leaving fewer available to fight the flames in eastern areas.

He also blamed the national austerity policies of the last few years, which have resulted in cuts to all public services.

But both Bournos and Karavellas cite the unusually extreme weather conditions that contributed to Monday’s disaster — high temperatures, strong westerly winds (a rare phenomenon in the region) and a dry winter that created tinderbox conditions.

As the global climate continues to change, this type of fire will become more likely, Karavellas warned.

According to a recent study by the National Observatory of Athens (NCAA) and reported by WWF, in the period 2021 to 2050, the number of high wildfire risk days per year is expected to increase by 30, particularly in the eastern part of the country.