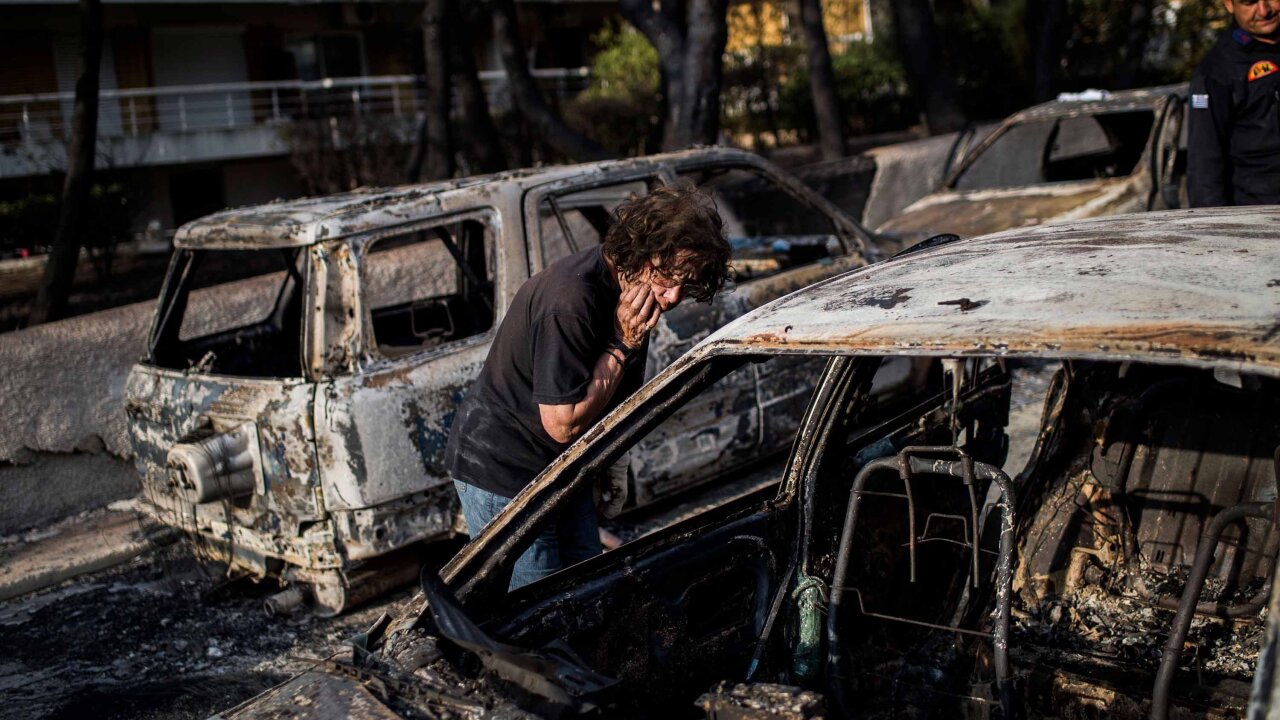 A woman searches for her dog after the fire in Mati, near the Greek capital Athens.

Dried pools of molten aluminum dot the charred roads of a small Greek village ravaged by fire this week. The flames were so hot that cars in their path began to melt, metal dripping to the ground and tires turned to liquid rubber.

Some residents of Mati, near Athens, who tried to escape on foot or in their cars were trapped by the advancing fire. Survivors spoke of seeing bodies on the sides of the road, later transferred into bright yellow body bags and carried away.

One of the latest victims was an 84-year-old man who succumbed to his burns in a hospital Wednesday, according to the Greek Health Ministry.

Twenty-six people died in a field just yards from the sea, where many fled to find refuge from the blaze. Rescue workers found their charred remains Tuesday.

“It seems that some of them, the deceased, knew each other, because they were found in groups of three and four,” Red Cross rescue worker Vassilis Andriopoulos said. “They could be friends or relatives or families who tried to protect themselves by hugging each other.”

Christiana Fragkou, who owns the land where those bodies were found, told CNN she had left entrance ways to her land open to provide an escape route. A number of people fled that way, she said, but some could not run fast enough.

“They came down, but just the last ones, as the fire was approaching and was very, very strong. They couldn’t make it because they couldn’t find their way out to the water,” she said.

Fragkou said she and her family fled to the rocky coast, where fishermen eventually rescued them and took them to the nearby port of Rafina.

Her and her mother’s homes have been severely damaged. “The wind brought an incredible, an immense fire, which ruined everything,” she said.

The death toll, currently at 81, is expected to rise as firefighters and the armed forces search cars and apartment blocks in the area.

The Greek fire service said it had received dozens of calls from relatives and friends of the missing. Photos of some of them, including a young boy, have been posted on a missing persons website in hopes they can be located.

Two of the missing are 9-year-old twins Sofia and Vasiliki Philippopoulos, according to their father, Yiannis. Speaking to Greek television Tuesday, he said he and their mother had searched for the girls in hospitals, police stations and even a morgue before seeing TV footage of them disembarking from a boat with other survivors.

But Yiannis Philippopoulos said he still has heard no news of the twins or of their grandparents, who were with the girls earlier.

The Greek coast guard told CNN’s Greek affiliate Tuesday it had no record of the twins’ whereabouts or condition.

Among the dead was an Irishman who was on his honeymoon, his family said in a statement from the Irish government.

Brian O’Callaghan-Westropp died as a result of the fires, and his widow is being treated for burns, the family said.

Almost 190 people were injured in the fires around the Attica region — the worst to hit Greece in decades — including 23 children, according to the Civil Protection Agency. Dozens are still in the hospital, with about 10 in critical condition.

More than 15 fires broke out on three fronts in that part of southern Greece on Monday afternoon, according to government spokesman Dimitris Tzanakopoulos, who described the challenge to firefighters as unprecedented.

Hundreds of firefighters were deployed Monday to battle the blazes in eastern Attica (the Mati area) and Kineta in western Attica, where two fires were still active Wednesday morning.

Gusts of wind up to 120 kilometers per hour (75 mph) — the fastest recorded in Attica in eight summers — fanned the flames, which were further fueled by temperatures topping 37 degrees Celsius (99 F) and low humidity, creating ideal conditions for fires to spread rapidly, according to the National Observatory of Athens.

Twelve port vessels were mobilized, along with a navy frigate, two gunships and three helicopters, Tzanakopoulos said, adding that 30 private vessels were also used in the rescue mission. Army and air force personnel and equipment were drafted to help, he said.

Tourists and locals stranded on the beach at Mati were taken by boat to Rafina, where buses transported them to hotels, Tzanakopoulos said.

Following an appeal for help, some European Union countries, including Cyprus, Italy, Spain and Bulgaria, offered assistance in the form of firefighting planes, trucks and paramedics.

Evangelos Bournos, mayor of Rafina-Pikermi, told the Athens-Macedonian News Agency that fire destroyed his home and forced his family to flee to the sea.

“I saw dead people. I saw at least 300 cars burned. I saw the burned houses,” he said Tuesday, recalling the scene in Mati. “There is no such settlement anymore.”

“We are trying to function in another reality because two settlements, Mati and Kokkino Limanaki (just south of Mati), have disappeared. They have been lost on the map,” Bournos said.

Up to 50 houses were also destroyed in Neos Voutzas, west of Mati, Bournos said: “It has changed the landscape. We live another reality.”

He praised the response of civilians, who were arriving in droves at the emergency headquarters Tuesday, bringing food, water, clothing and other essentials, and called on the government to act quickly to help survivors rebuild before winter: “They have nothing.”

Some local residents have criticized the initial response from the Greek authorities.

Fragkou — who owns the land where more than 20 died — suggested that the emergency services’ response should have been better given how close the outbreak was to the capital.

“We lack organization, and we don’t invest in prevention and that’s the whole deal,” she said.

Dimitra Stathopolou, another Mati resident, told CNN that the town was unprepared and that she fled to the ocean because cars were blocking the roads.

“There was no way to escape with a car, so the only way was going down to the sea,” she said. Stathopolou spent 2½ hours in the water with around 50 others before being rescued, she said, adding, “The fire was everywhere.”

Yannis Stratikopoulos of the civil protection agency rejected suggestions Tuesday that the emergency response had been badly coordinated.

Greek Prime Minister Alexis Tsipras on Tuesday declared three days of mourning and urged people to focus on fighting the fires and helping the victims.

“Now it is a time for mobilization and fighting,” he said. “The fight to save what can be saved, the fight to defeat the fire, the fight to find the missing so that we don’t mourn any more lives and we may soothe the pain of those affected.”

Supreme Court Prosecutor Xeni Dimitriou has ordered an investigation into the causes of the fire.

Government spokesman Tzanakopoulos suggested Tuesday that the Attica blazes could have been started deliberately and said that Greece had requested drones from the United States to detect any “suspicious activity.”

Also on Tuesday, the Greek government approved 20 million euros (about $23 million) to address the immediate needs of people and towns affected by the wildfires, the spokesman said.

Greek soccer team Olympiacos and owner Evangelos Marinakis are donating 1 million euros (about $1.2 million) to help people affected by the wildfires, the club said Tuesday. It is also opening bank accounts so fans can make donations.

Much of Europe, including Greece, has been baking under a high-pressure ridge that is allowing tropical heat to climb all the way to the Arctic.

Temperatures above 32 C (90 F) have extended to the northern reaches of Scandinavia, setting records in Sweden, Finland and Norway for stations above the Arctic Circle.

And Greece could soon be battling a crisis on another front. Bulgaria has warned its southern neighbors, Greece and Turkey, that they could face floods as heavy rains swell the Arda and Maritsa rivers, Reuters reported Wednesday.