Dozens dead as wildfires near Athens, Greece fires force people to flee into the ocean 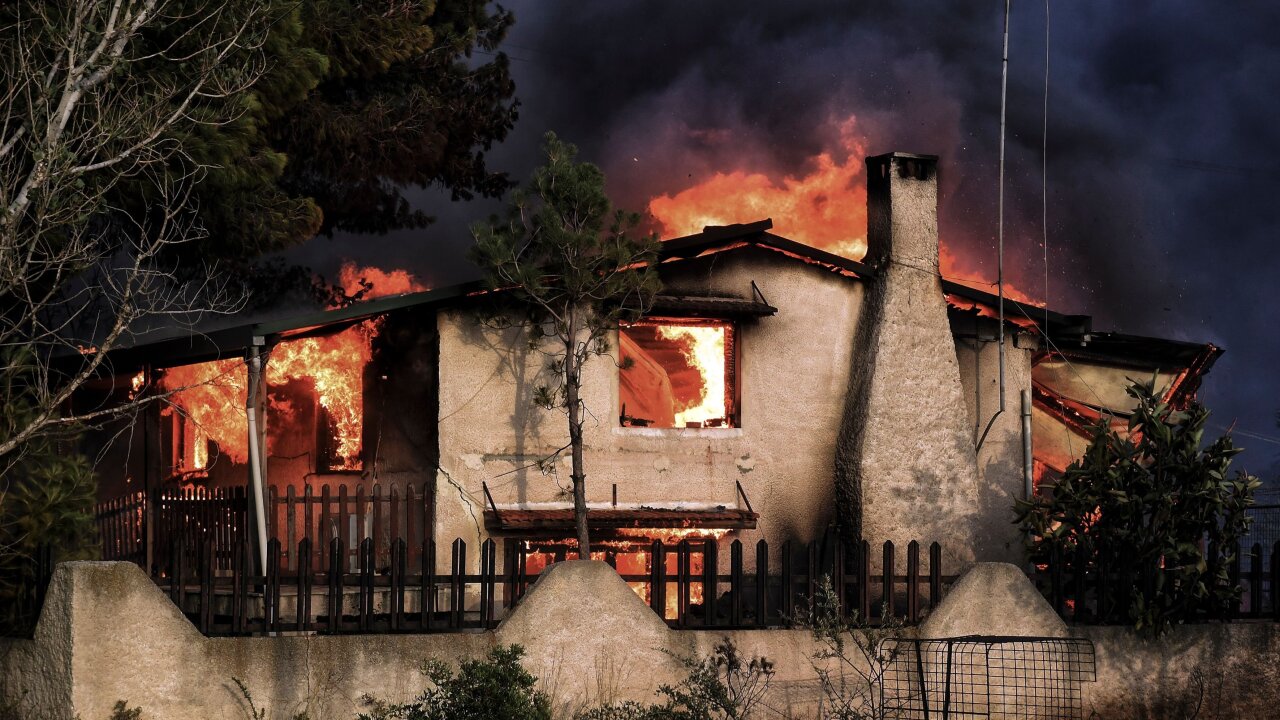 A house burns during a wildfire in Kineta, near Athens, on July 23.

At least 49 people have died in the worst wildfires to have hit Greece in over a decade, officials said, with many people trapped by the flames and forced to flee into the sea.

Residents told of horrifying scenes as flames engulfed a seaside village. Some escaped only by running into the sea, chased by the advancing fire.

More than 100 people have been injured in the blazes, which are burning in three main fronts in the Attica region, including one which is currently out of control near the seaside resort area of Mati.

The fires, close to the capital Athens, are the deadliest to have hit the country since those which burned through the southern Peloponnese peninsula in August 2007, killing dozens.

A house burns during a wildfire in Kineta, near Athens, on July 23.

“Attica is facing a very difficult night. The combination of intense winds and multiple parallel fronts has created an unprecedented extent and difficulty for firefighters,” government spokesman Dimitris Tzanakopoulos said in a briefing late Monday.

The Attica region, which has a population of around 3.5 million people, is home to the Greek capital Athens, the port of Piraeus and a number of suburban towns.

The fires forced Prime Minster Alexis Tsipras to fly back early from a state visit to Bosnia. He has urged citizens to forget their property and focus on survival.

“Everyone should keep their temper and take care to protect the most precious good that is human life,” he said.

“Property, all that has a material value, (can be) recreated. Human lives are the ones that cannot come back.”

Mati resident Nana Laganou, told journalists that she had escaped by running into the sea, and that the fire was “lightning fast” and the “first time” she’d encountered something like this.

“I would have liked to see some (reaction) from the state, but we didn’t and we won’t and that makes me angry.”

Another Mati resident, Kostas Laganos said that he had also escaped the flames by diving into the ocean. “Thankfully the sea was there and we went into the sea, because the flames were chasing us all the way to the water, it burned our backs and we dove into the water,” he said.

“It reminded me of the eruption (of Vesuvius in 79 AD) at Pompeii, exactly that, and I said my God, we must run to save ourselves, and nothing else. Terrible.”

So far Spain and Cyprus have offered assistance, and Greece has called on other fellow EU members to help battle the blaze.

Various governments, including the US and the Netherlands, offered sympathy to the beleaguered region.

Much of Europe has been baking under a massive high-pressure ridge that is allowing tropical heat to climb all the way to the Arctic.

Temperatures above 32˚C (90˚F) extended to the northern reaches of Scandinavia, setting records in Sweden, Finland and Norway for stations above the Arctic Circle.

The result has been a string of unprecedented wildfires in Sweden that have prompted the country to request assistance from other nations such as Italy, with more resources to fight wildfires.