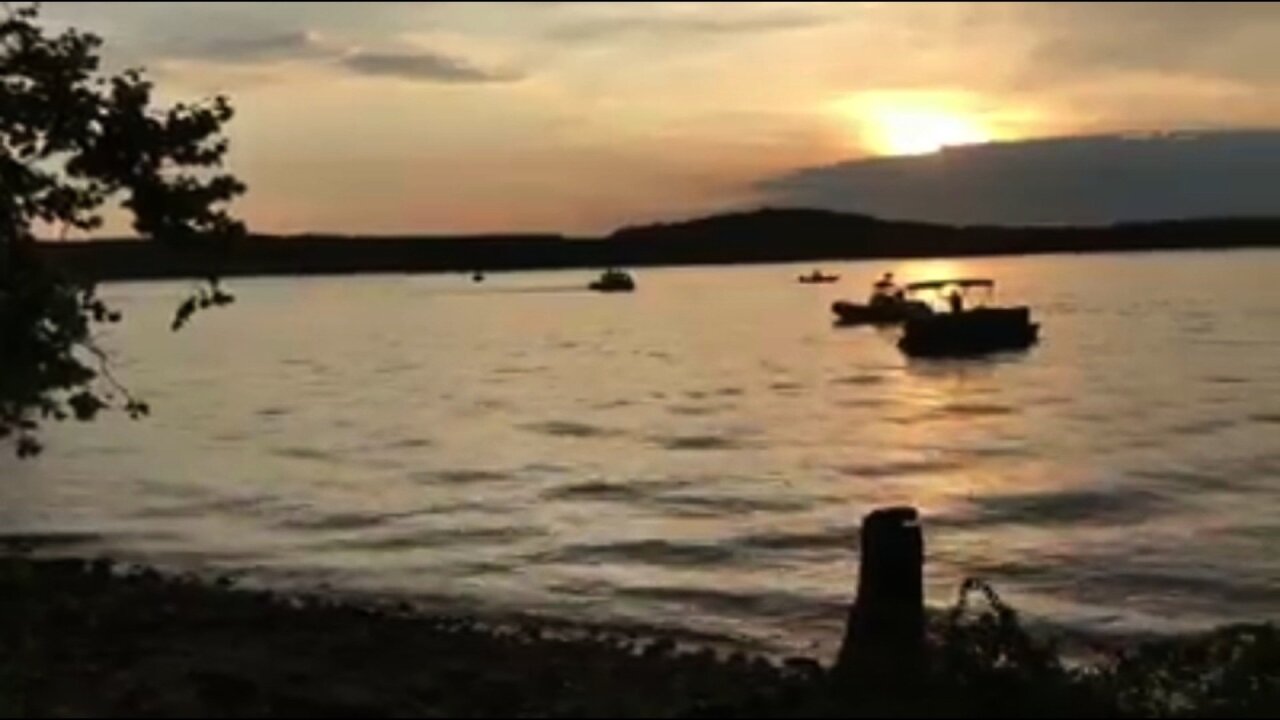 Crews from multiple Missouri agencies are on the scene of a mass casualty incident with a “tourist-type boat involved,” the Stone County Fire Department said in a statement. Full Credit: Southern Stone County Fire Protection District

The winds and the waves on Table Rock Lake near the Missouri tourist mecca of Branson were whipping up. A nice day on the water was rapidly deteriorating.

A storm that had raced across the Midwest earlier Thursday was rolling in with strong gusts that rocked the boats on the lake in southwestern Missouri.

One of them, an amphibious vessel known as a duck boat, made it to shore, ahead of another Ride the Ducks Branson craft carrying 31 people.

“We got out of it and made it to the ramp. And I turned around and watched the other boat nose-dive, and my heart dropped,” passenger Kourtney Parker said.

Onlookers desperately tried to help as the duck boat began to sink in 40 feet of water. One group pulled an unconscious woman out of the water. An off-duty law enforcement officer dove into the choppy waters.

There were life jackets on the boat, but Stone County Sheriff Doug Rader said he doesn’t know whether people were wearing them.

Seventeen people, ranging in age from 1 to 70 years old, died. There were 11 members of one family on board — only two survived.

Investigators are now looking into questions about the accident, including the life jacket situation and what the crew knew about the incoming weather.

The Coast Guard will conduct an investigation, said Sgt. Jason Pace of the Missouri State Highway Patrol, which is assisting. A team from the National Transportation Safety Board was to travel to the scene Friday.

The NTSB, on Twitter, sought the public’s help for photos or video of the sinking.

According to weather data, the storm traveled hundreds of miles at 55 mph before it hit the lake.

The area around Branson was placed under a severe thunderstorm warning shortly after 6:30 p.m. (7:30 p.m. ET), about half an hour before the boat sank.

Radar shows the first wind gusts arriving at the lake ahead of the storm, at 6:59 p.m.

There were reports of damage throughout Stone County, including trees down and structural damage, CNN meteorologist Taylor Ward said. The highest wind gust reported in the area was 63 mph.

The storm was part of the same upper-level weather system that spawned destructive tornadoes Thursday in Iowa, Missouri’s northern neighbor.

Authorities received the first 911 call about the sinking at 7:09 p.m., the sheriff said.

In July, the company operates tours that depart every 30 minutes from 8:30 a.m. to 6 p.m. A tour lasts about 70 minutes, with about half on land and half on water, the company’s website says.

A mechanical problem on another boat possibly led to a delay in the ill-fated craft beginning its tour.

‘Those poor people, oh no!’

Jennie Phillips-Hudson Carr, was on the nearby Showboat Branson Belle, a riverboat docked near the sinking ship.

Video she recorded shows at least three vessels on the lake, including the two Ride the Ducks boats rocking and tilting to the side as ripples turned into massive waves.

“Oh my God, those poor people, oh no!” someone says on the video as the water crashes into the smaller boats, and the one starts sinking.

“If there’s kids on there, those poor babies,” a female voice says.

The boat sank, wheels down, 40 feet down, and then rolled to an area 80 feet deep, Rader said.

Among those killed was the driver, Robert “Bob” Williams, said his widow, Judy Williams.

A second crew member — the boat’s captain, whose name wasn’t immediately released — was among the survivors and was taken to a hospital, Pattison said.

‘This should never end this way’

Ripley Entertainment said it recently acquired the boat company. The boat had a captain and a driver with a commercial license, he said.

“Obviously, we shouldn’t be out there in severe weather,” Pattison said. The company has been in operation for 47 years without any incident such as this, he said.

Asked whether the passengers and two crew members had time to put on life jackets, Pattison said, “We don’t know that yet.”

“People are supposed to be able to go out for an outing and have a good time. This should never end this way — there’s not much more you can say,” he said when asked whether he had a message for relatives of those who were aboard.

Two passengers on the Showboat Branson Belle, Trent Behr and his girlfriend, Allison Lester, described what they saw when they appeared Friday on ABC’s “Good Morning America.”

Lester said the weather had been nice Thursday. But as she and Behr boarded the dinner boat cruise, “the wind really picked up bad and debris was flying everywhere,” she said.

As they toured the dinner boat, the couple looked out the window and saw the duck boats struggling in the water.

“It was maybe two minutes later, and we actually heard the captain say that the boat flipped or the boat is sinking,” Behr said.

Behr said that at one point, he and other passengers on the dinner boat helped pull an unconscious woman from the water. EMTs arrived before he could administer CPR, he said.

Among the rescuers was an off-duty sheriff’s deputy on the Branson Belle who “jumped in and helped,” said Rader, the Stone County sheriff.

Nearby passenger: Everything happened fast

Duck boats are amphibious vessels that travel on both land and water, and are popular among tourists in major cities. The boats’ history dates to World War II, when such vessels were a common sight due to their versatility.

In Branson, they are driven along city streets for part of the tour before the driver uses a ramp to enter the lake.

Pattison said he didn’t know when the doomed boat — or the one just in front of it — started the tour or entered the water.

Parker, who was on the duck boat in front, told CNN that both vessels had delayed their entry into the lake.

“We got toward the lake ramp, but our propeller quit working. So we had to wait 15 to 20 minutes for a backup bus, which set us back and that (other) boat, because we were in front of them, and they had to wait for us,” Parker said.

After the boats entered the water, she said, they “got about halfway across the lake, and then, bam, everything all happened so fast,” she said. “We were literally under water a couple times.”

Pattison said he believes it was calm when the boats went into the water.

“Partway through coming back is when … the waves picked up and then obviously swamped the boat,” he said Friday morning.

Driver was ‘the calmest spirit you could ever meet’

Williams, the driver, was a caring man who was friendly to everybody, his widow told CNN.

“He’d talk to anybody. He made an effect on many lives. He would give up his life for somebody,” she said in an emotional phone interview Friday. “That’s the kind of man Robert was, is.”

His grandson, Victor Richardson, told CNN: “He was a God-fearing man; he was very humble. He was the calmest spirit you could ever meet.”

Bob and Judy Williams were married for more than 30 years and lived in Branson, according to the grandson.

‘Our hearts are breaking’

Ride the Ducks Branson said it was deeply saddened and that the business would be closed “while we support the investigation, and to allow time to grieve for the families and the community.”

“Words cannot convey how profoundly our hearts are breaking,” it said in a statement on its website. “We will continue to do all we can to assist the families who were involved and the authorities as they continue with the search and rescue.”