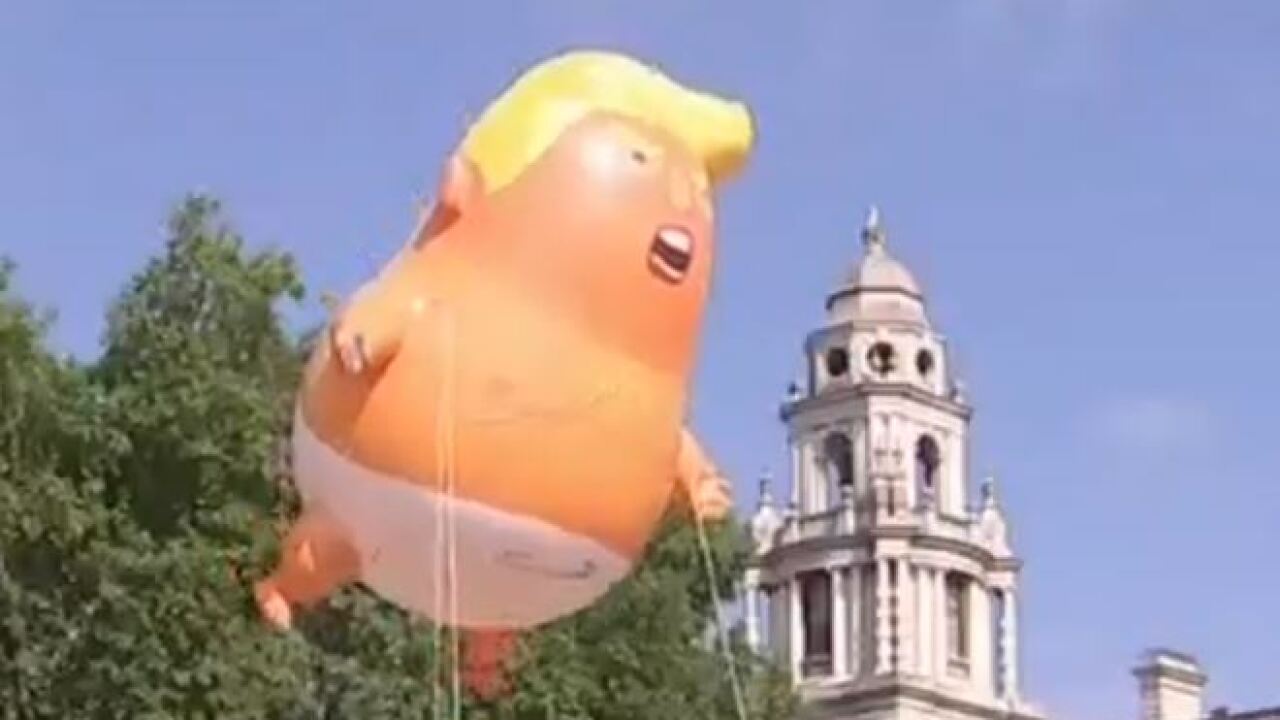 Protesters plan to fly a giant “Trump Baby” balloon over Britain’s Houses of Parliament Friday in protest of US President Donald Trump’s controversial visit to the UK.

Trump arrived in Britain on Thursday, where he is scheduled to hold talks with Prime Minister Theresa May and take tea with the Queen.

Blimp organizer Leo Murray told CNN the giant balloon had been designed to speak to Trump “in a language that he understands, which is personal insults.”

The orange-hued blimp stands at 6 meters (19.6 feet) tall, and features “small hands, a tiny mobile phone and a giant nappy/diaper,” according to the organizers.

It’s scheduled to lift off at 9:30 a.m. local time (4:30 a.m. EST) and will fly up to 30 meters (or 98 feet) for two hours — coinciding with the first scheduled protest slated to take place in central London on Friday.

Murray explained that, while some people might be uncomfortable with the idea of ridiculing the US President, he feels that Trump’s policies have created an atmosphere where “normal diplomatic rules have become very much suspended.”

“I feel like once we got to the point where we have a head of state who is suspending due process for some of the world’s most vulnerable people and snatching babies from their parents at the border and locking them in cages — at that point I don’t think we need to be civil to this man,” he said.

Trump’s schedule has been carefully designed to avoid planned protests, but it is understood he is familiar with the “Trump Baby.” Asked if he was concerned about protests during his visit, Trump told reporters in Brussels on Thursday: “I think they like me in the UK,” and said the British people shared his concerns on immigration, claiming “that’s why Brexit happened.”

Murray said that organizers “don’t really care” if Trump sees or reacts to the blimp.

“It’s about lifting the spirits of the nation and it’s already doing that, you know, it’s just putting smiles on the faces of people who had started to despair about the state of politics,” he said.

Sarah Elliott, chairwoman of Republicans Overseas UK, told CNN she did not think Trump would be fazed by the stunt.

“I think whenever his detractors go after him, it makes him double down and it actually encourages him to keep going and prove everybody wrong,” she said. “So I think that’s the effect the balloon will have,” she said.

As of Thursday, more than 1,900 people had contributed to a crowdfunding campaign for the balloon, raising more than £30,000 (nearly $40,000). Organizers now say they hope to take the blimp on a “world tour,” following Trump on his international diplomatic engagements.

The request to fly it was approved by London Mayor Sadiq Khan earlier this month.

Khan, who has had a testy Twitter relationship with Trump, gave the unusual request the go-ahead after more than 10,000 people signed a petition.

The mayor of London has been outspoken in his opposition to Trump’s visit. He criticized the US President over his tweets following the terror attacks in London last year.

Related: A look back at Trump’s strained Twitter relationship with the UK

And he is not alone. Trump postponed his trip to the UK several times as a petition to block him from entering the country gained so many signatures that it was debated in Parliament. The UK Parliament’s Speaker made clear that Trump would not be invited to address MPs. The petition against Trump claimed an official state visit would be embarrassing for the Queen.

Murray says the blimp protest is also a demonstration against the British government, for inviting Trump against wishes of the British public, citing the nearly 2 million people who signed the petition.

Protests are scheduled throughout the day in London on Friday.