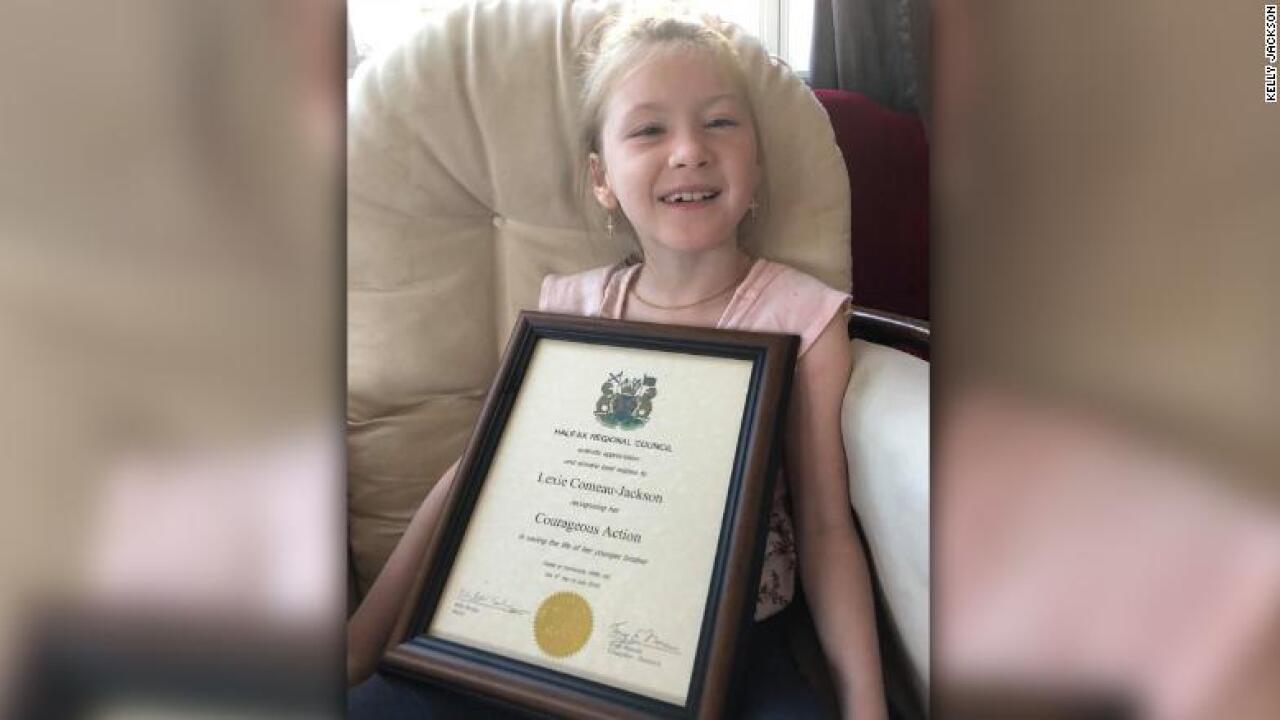 Lexie Comeau-Drisdelle can’t walk or talk, but she saved her baby brother from drowning, earning her hero status in her hometown of Halifax, Nova Scotia.

This small but mighty hero was ready to celebrate her ninth birthday with family and friends, including her 1-year-old brother, Leeland.

With the rest of the family caught up in getting ready for the party and not paying attention to him, Leeland decided to take a walk to the backyard and jump into the pool.

But Lexie, who always keeps her eyes on her little brother, saw the potential tragedy unfold.

Lexie has cerebral palsy, a disorder of movement, muscle tone or posture that is caused by damage that happens during the development of the brain. That means she isn’t able to speak and couldn’t run after her brother, but she knew she had to alert others to help him.

So, she did the only thing she could, and let out the loudest scream her lungs could possibly give.

“I was upstairs changing for the party, her dad was picking up her older brother, and my mom was in the kitchen, when suddenly I just heard Lexie screaming. I panicked and immediately thought ‘Oh no, she must have fallen off her chair,’ ” said Kelly Jackson, Lexie’s mother.

Lexie’s grandmother quickly ran toward the screaming child. She realized Leeland was not around, and Lexie kept screaming and pointing to the door that leads to the pool.

“When my mom told me what was going on, I quickly looked out the window and there, at the edge of the pool I saw his little head,” Jackson said. “I began to panic, and my mom quickly ran towards him and pulled him out.”

The family brought Leeland inside, and after following instructions from an emergency hotline they called, they were able to get him in stable condition before taking him to the hospital.

“At that moment, it was so scary. We thought it was not going to end well, we hugged him a million times. In two seconds a life can change and we are just thankful that Lexie was so quick to alert us,” Jackson said.

The incident happened May 5 and Lexie was recognized on Wednesday as a hero by the Halifax Regional Council for her response. She was also honored by the city’s police department.

“Heroes come in all sizes. It was a real pleasure to recognize young Lexie for alerting her mom when her toddler brother made a dash for the pool,” Halifax Mayor Mike Savage tweeted.

Jackson said she wants to advocate for those with disabilities, pointing out that just because people can’t speak, it doesn’t mean they don’t understand what is going on.

“Some people think that because they have a disability, they are not able to do things, but if she could walk, she would have grabbed him and he would have never gone out there. Her disability is all physical. She is a very bright girl.”