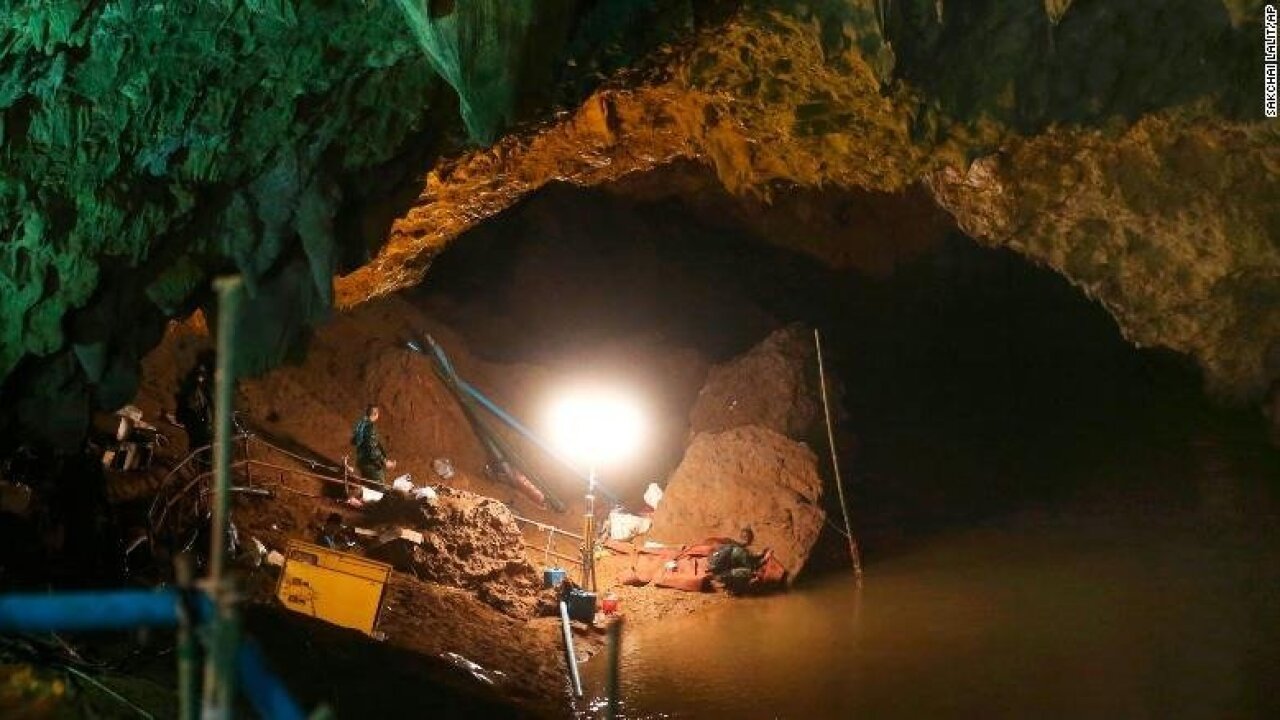 Thai soldiers walk out of the entrance to the Tham Luang Nang Non cave on Friday.

Thai Navy SEAL divers have set up an underground operations base deep within a cave system where 12 boys and their soccer coach are thought to be trapped in northern Thailand.

Rescuers are hopeful of getting through to a larger, deeper chamber, informally named Pattaya Beach, where the group, members of the Wild Boar soccer team, is believed to have been trapped by the rising water.

It’s been nine days since the boys, aged 11 to 16, and their coach entered the cave for an afternoon outing, only to become stranded in the dark tunnels by a sudden and continuous downpour.

International experts have joined rescue efforts deep inside the cavern as the boys’ parents maintain a constant vigil.

Dive teams are working around the clock, including the Thai Navy SEALs and experts from the US, China, Australia and the UK.

Written on the tanks are words of encouragement: “From Navy Command Region 1. Please find them soon.” On another, in red tape stuck to the metal, are the words: “Bring the Wild Boar team home.”

Oxygen tanks have been installed at 25-meter intervals along the cave’s tunnels and chambers for the dive teams to use.

At the heart of the search is a T-junction about a kilometer from the cave entrance.

Rescuers have theorized that the group took the left fork, which would eventually lead them to higher ground at Pattaya Beach.

But the channels leading to this, now flooded, have proven difficult for divers to navigate.

Osatanakorn told reporters Monday that progress had been made in opening and maintaining the narrow channels used by rescuers.

“(If) the group went to the left side, there is … a very narrow space and very small channel. The foreign divers (carrying) equipment will not be able to pass this channel. This is the only channel to get inside,” Osatanakorn said.

“So we will run two operations, opening this channel to get through and maintaining so all rescue team can get inside and work there.”

Rescuers are still attempting to drain the floodwaters, but while water inside the cave is receding, levels haven’t significantly dropped at the crucial points at the third chamber and T-junction.

Alongside the draining operation, rescuers are working on a secondary plan to access the caves from above.

The search teams have now surveyed all possible chimney across the mountain, Osatanakorn said, and found two chimneys that are considered potentially viable options.

One of the options has allowed the teams to descend to a depth 200 meters, and they are continuing to go deeper, he added.

In the vigils that have grown with every day of fruitless searches, families and friends have prayed, made offerings, and held fast to the possibility of signs of life.

Some, enduring the torture of such a long, silent wait, have collapsed in the mud with exhaustion, and been sent to a hospital.

“I feel I have just lost my heart when I found his bag, mobile phone and his shoes,” said Sudsakorn Sutham, whose son, Prajak is among the 12 missing boys. “But all I can do is wait.”