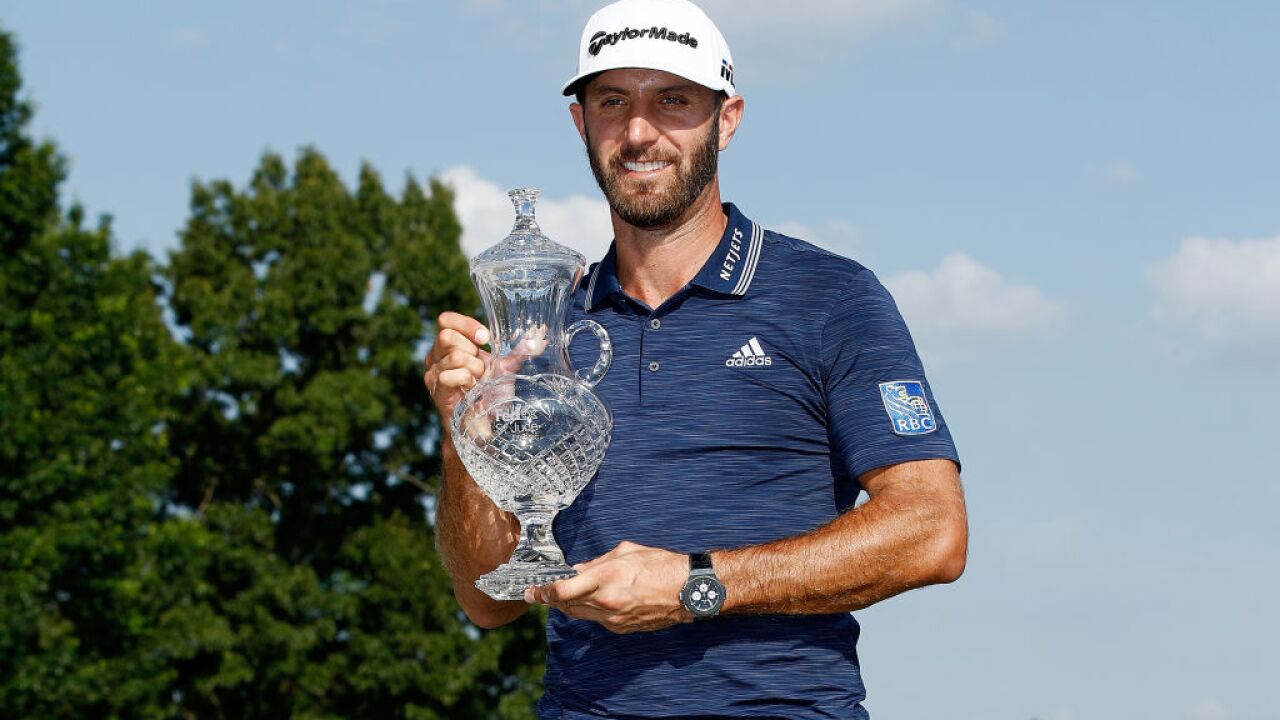 MEMPHIS, TN – JUNE 10: Dustin Johnson poses with the trophy after the final round of the FedEx St. Jude Classic at TPC Southwind on June 10, 2018 in Memphis, Tennessee. (Photo by Andy Lyons/Getty Images)

If Dustin Johnson wanted to make a statement ahead of this week’s US Open, he succeeded.

The big-hitting American had more or less ensured victory with a four-shot lead playing the final hole of the St Jude Classic Sunday.

What followed was the golfing equivalent of a mic drop — a gesture acknowledging your own triumph at the end of a performance — as Johnson nonchalantly holed out for a walk-off eagle.

It prompted exultant roars from the galleries and secured the 33-year-old his 18th PGA Tour title by a six-shot margin.

It also took him back to world No. 1 ahead of compatriot Justin Thomas, just four weeks after surrendering the berth.

Typically, though, Johnson remained the most relaxed man on the course.

“What a cool way to end the day,” he shrugged, calling the eagle a “bonus” and admitting he hadn’t intended to hole out from his second shot.

“Obviously I knew it was on a good line. Did I ever think it was going in? No. I knew it was good from the cheers … but I didn’t actually realize it had gone in until a good 10 seconds later.”

Johnson had been confident all tournament, having previously won at TPC Southwind in 2012.

“I knew coming into the week I was playing really well and it’s a golf course I’ve had success at, so I liked my chances a lot,” said Johnson, who entered the final round tied with Andrew Putnam but promptly established a commanding lead when Putnam double-bogeyed the first.

“I played really well all four rounds. Today got off to a slow start, but on the back nine I pulled away from the rest of the guys.”

The second major of the season is now just days away, but the 2016 US Open winner claims being the game’s top-ranked player won’t affect his approach heading to Shinnecock Hills, New York.

“It’s more my game,” said Johnson, whose pairing with Thomas and Tiger Woods on Long Island Thursday and Friday has left golf fans drooling. “Winning this week has given me more confidence than being number one in the world.”

Since Johnson’s breakthrough win at the Turning Stone Resort Championship in 2008, only Woods can now match his tally of PGA Tour wins.

While the wait for Woods’ first win since 2013 continues, don’t bet against DJ wrapping up a second title in the space of a week come Sunday.