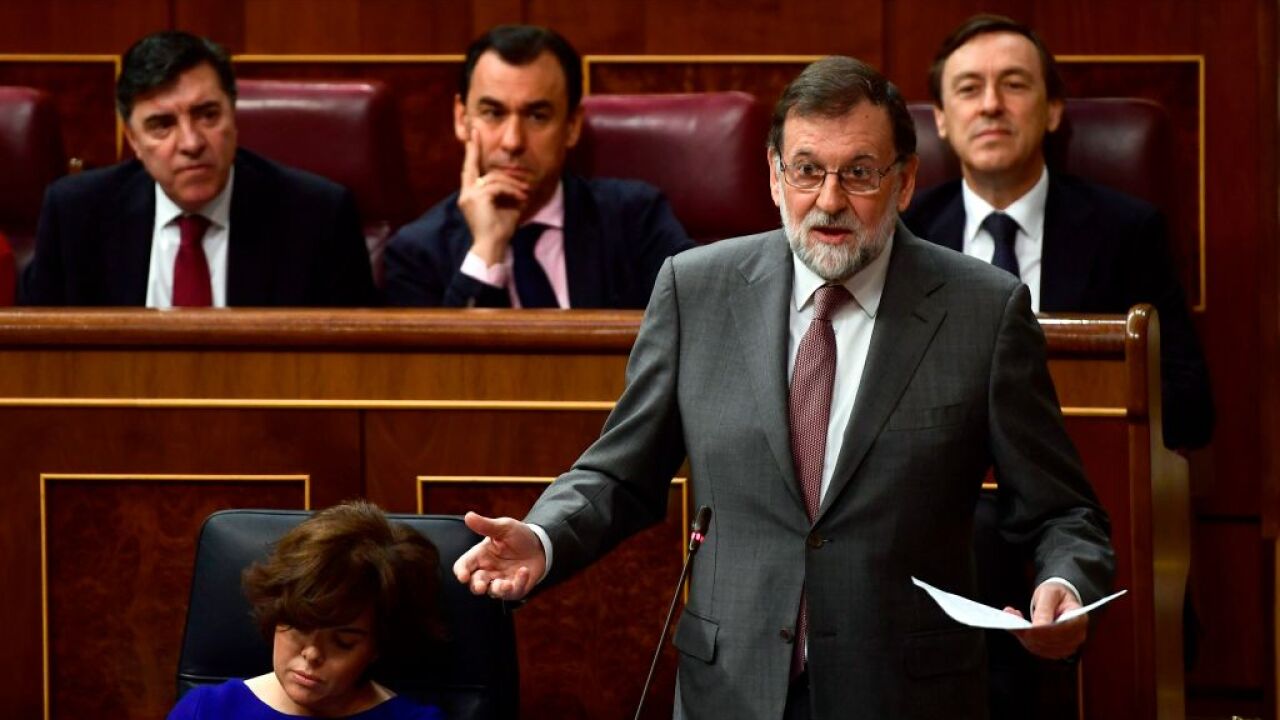 Spanish Prime Minister Mariano Rajoy giveds a speech during a session at the Lower House of Parliament in Madrid on May 30, 2018, two days before the assembly is due to vote on a no-confidence motion against his government. – The Socialists filed the motion seeking Rajoy’s ouster in parliament, a day after a court fined his Popular Party for benefiting from illegal funds in a massive graft trial. Spain’s National Court said it had uncovered a vast system of bribes given to former PP officials in exchange for lucrative public contracts between 1999 and 2005 (Photo by PIERRE-PHILIPPE MARCOU / AFP) (Photo credit should read PIERRE-PHILIPPE MARCOU/AFP/Getty Images)

Spanish Prime Minister Mariano Rajoy was toppled by a corruption scandal Friday, becoming the first leader in Spain’s modern democracy to lose a vote of no-confidence in Parliament.

The demise of Rajoy — one of Europe’s longest-serving political leaders — paves the way for Pedro Sanchez, the leader of the main opposition socialist party, to become Prime Minister.

Friday’s vote was the culmination of years of corruption allegations against Rajoy’s Popular Party. The scandal came to a head last week in a court convicting his former aides of running slush funds to help finance Popular Party election campaigns.

The fall of Rajoy’s government comes at a time of wider political turmoil in Europe. Two populist parties in Italy have just reached an agreement to form a coalition government after months of wrangling, Brexit dominates UK politics, and the European Union must now contend with a looming trade war with the US.

Spain’s political tumult is born of a long running corruption scandal coupled with internal division. Spain’s economy is performing better than that of Italy and anti-European sentiment played no part in its change of government.

Rajoy’s fate was sealed after the Socialists secured support for the no confidence motion Thursday from a number of smaller parties in Parliament, including the Basque Nationalist Party.

In total, 180 of the chamber’s 350 lawmakers voted in support of the motion, a clear majority. There were 169 votes against and one abstention. It was the first time in Spain’s post-1977 democracy that a Spanish Prime Minister has fallen in this way.

Ana Pastor, President of the Spanish Parliament, announced that Sanchez has “the trust of the Parliament” and so becomes the new Prime Minister of Spain. In line with the constitution, she will meet with Spain’s King Felipe II on Friday afternoon to inform him of the vote’s outcome.

Sanchez received a standing ovation, with parliamentarians shouting: “Yes, it can be done.”

Rajoy shook hands with Sanchez, his 46-year-old successor, to congratulate him.

Sanchez — a pro-European economics professor who was a keen basketball player in his youth — has previously said that he would call for snap elections should he become prime minister.

Rajoy had effectively conceded defeat ahead of the vote, congratulating Sanchez on his expected win in a brief address to Parliament.

“In light of what we all know, I presume that the vote of no confidence will go ahead, and Pedro Sánchez will become the Prime Minister and I want to be the first to congratulate him,” Rajoy said.

“I will accept the result of the vote as the democrat I am, but I cannot agree with what has been done.”

“I wish my substitute could say the same when his day comes, for the good of Spain.”

Before Rajoy’s arrival, Rafael Hernando, spokesman for the Popular Party in Parliament, asked Sanchez to withdraw the vote of no confidence, saying that he was proud of Rajoy as Prime Minister. “He is an honest man who has worked tirelessly to rebuild a country that the PSOE left devastated,” he said.

However, Margarita Robles, spokeswoman for the Socialist Party in Parliament said: “Spain does not deserve a prime minister who is not here and who lies in the courts of justice to cover corruption.”

On Thursday, Rajoy chose not to attend a parliamentary debate on his future, when several opposition parties openly said their lawmakers would vote against him. That meant 180 of parliament’s 350 members, a clear majority, would voice their lack of confidence in the leader.

Rajoy’s Popular Party has been plagued with corruption allegations for years. Rajoy has faced the humiliation of testifying in cases against members of his party, though he has not been among the accused.

The confidence motion was filed by Sanchez after a court convicted Rajoy’s former aides of running slush funds to help finance Popular Party election campaigns. The court also questioned the credibility of Rajoy’s testimony during the proceedings.

It was the first time in Spain that a party had been convicted and fined on corruption-related charges.

The Party of European Socialists, made up of socialist parties from across the European Union, welcomed Sanchez’s election, saying his government would form a “credible alternative to a conservative government hounded by corruption.”

PES president Sergei Stanishev described Sanchez as “a progressive and honest pro-European” who would “shift away from the austerity policies of the past years in his country.”