The man who cycled across the frozen Arctic 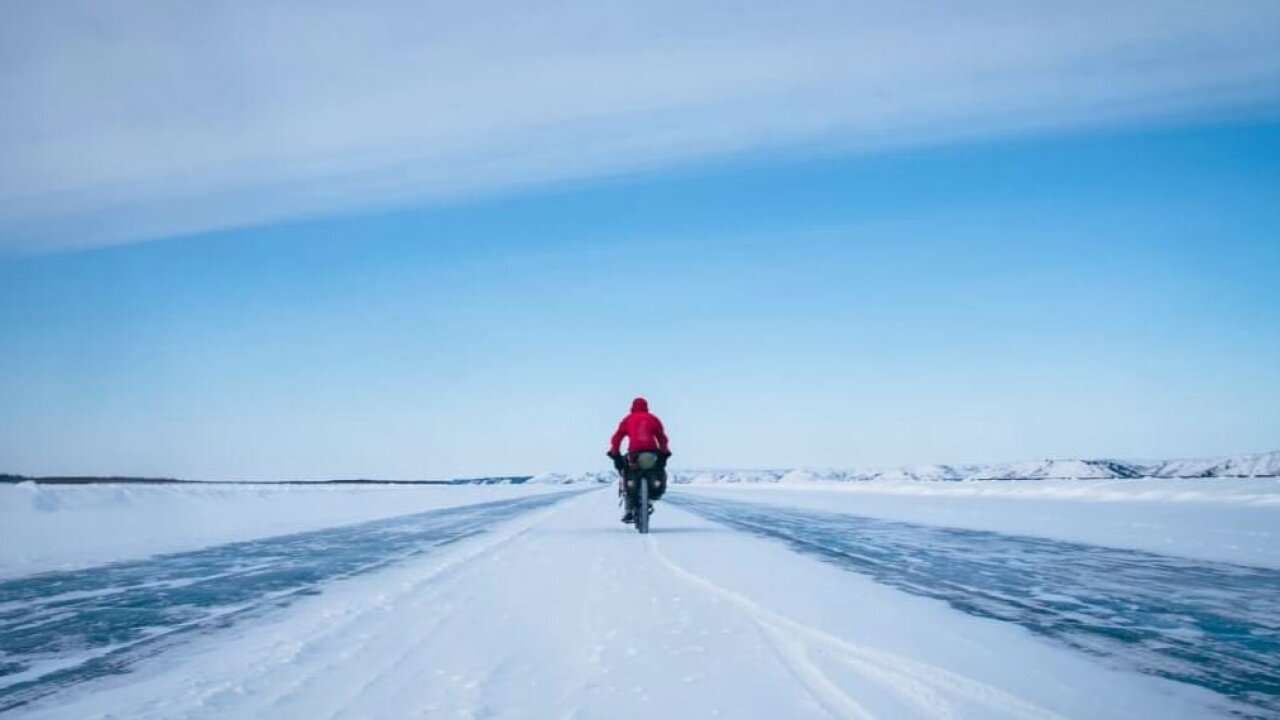 In 2014, 22-year-old Ben Page set off on a round-the-world adventure by bike. The pinnacle of the trip was cycling through the Canadian Arctic in winter. Here he rides on the frozen McKenzie river.

In 2014, 22-year-old Ben Page set off on a round-the-world adventure by bike. The pinnacle of the trip was cycling through the Canadian Arctic in winter. Here he rides on the frozen McKenzie river.

Ben Page set up the shot. He erected the tripod, attached the camera, pressed record.

Treading carefully to ensure his footprints in the snow were out of sight — he got on his bike and cycled past the lens, eyes fixed on the vast untouched landscape ahead.

Page, 22 at the time, was in Yukon territory, the Canadian Arctic, on the most grueling section of a round-the-word cycle odyssey.

He had left the city of Whitehorse and was roughly 1,000 miles (1,600 kilometers) away from Tuktoyaktuk, the end of the North American continent.

To get there, he would have to cycle for 30 days along roads and frozen rivers, contending with snow storms, bitter winds, and temperatures as low as minus 40 Celsius (minus 40 Fahrenheit)

Before starting his round-the-world trip at Ushuaia, Argentina, the southernmost point of the Americas, Page had barely picked up a camera.

But 15 months and more than 10,000 miles later, he found himself in northern Canada, filming the footage that would form an award-winning documentary, “The Frozen Road.”

Despite his film receiving distinguished recognition — including “best adventure film” at the New York Wild Film Festival 2018 and “best director” at the Bilbao Mendi Film Festival — Page confesses his awkward relationship with the camera.

“It’s contrived,” he tells CNN Travel of his definitive shot in the snow. “It edits nicely together, because it’s fluid. But there’s 10 minutes either side of that shot of me walking to and fro from the tripod.”

It was a sense of adventure rather than a cinematic vision that sent him on his way. Page had dreamed of traveling the world by bicycle, and in 2014, after graduating from Durham University with a degree in geography, he decided to make it reality.

“I was 22, no mortgage, no girlfriend. I had nothing keeping me and tying me at home. So I set off,” he says.

The adventure lasted three years, covering 40,000 miles (64,000km) and five continents: the Americas, Africa, Europe and Asia. The Arctic was its pinnacle. For Page, it was a mental challenge as much as it was a physical one.

“God knows why we set ourselves these crazy challenges, but we do,” he says.

Page is not the first to cycle the Arctic, and nor will he be the last. There are commercial cycling tours available from Vancouver to Tuktoyaktuk. Cycle Canada organizes a 35 day trip, covering 1,935 miles (3,135 kilometers), for just under $7,000.

But Page’s journey was different.

There were no hot showers and electricity, nor was there the luxury of rest days. Page rode alone in late winter, camping most nights, apart from the rare occasion he found a cabin in which to hide from the relentless wind.

He carefully rationed his food — which cost about $4 a day — and prayed that his calculations added up, despite the snowstorms that slowed him down.

“You’ve just got to get up and go,” Page says. “It’s not exactly steely courage or bravery, there’s no option, so you just do it.”

Cycle Canada’s Bud Jorgenson would say the opposite — that it requires a lot of bravery. Jorgenson has cycled the route twice himself, but only in the summer. He says he knows of only one other, besides Page, who has dared cycle so far north in the winter months.

“But he only got as far as the Yukon-British Columbia border, and the cold got to him,” Jorgenson says, explaining how the man had suffered from a severe case of frostbite.

From the UK, Page had barely experienced snow, let alone so much of it. The coldest of winters in Britain suddenly seemed ludicrously mild.

Most days were at least minus 20 degrees Celsius, and these temperatures would drop drastically in strong winds and overnight. Page grew a mustache of icicles, and still bears light scars from the frost nip on his cheeks.

The cold made the smallest of decisions critical. Simply taking off his gloves to film or fiddle with his bike risked exposing his fingers to frostbite. The pain when his frozen hands started to thaw was excruciating, like nothing he had experienced before.

“I’d catch myself just shouting the air blue,” Page says. “There’s no one around and you just go a bit mad. Then I’d catch myself and be like, ‘Ben, steady now, steady, be careful.'”

Alone in the Arctic

The isolation took its toll. Page realized there was a fine line between solitude and loneliness — or as he calls it, a “constant duality.”

A craving for solitude had driven the trip, Page loves the freedom of being alone. But then there was the flipside. “There are the moments when things start going wrong, when fear starts creeping in,” he says.

“Those are the lonely moments. When you realize that you have put yourself in this position. No one really knows where you are — and does anyone really care?”

The lowest of the lows was when Page found himself trapped on the Peel river, 40 miles away from the next point of civilization. He had been following the Dempster highway, a gravel road that cuts across the Arctic, but cycling alongside hefty trucks had been tough.

When Page reached the small hamlet of Fort Macpherson, locals told him of an off-road route to the next village, along a frozen river.

But on the first night the harsh and unpredictable weather took a turn for the worse and he found himself trapped on the river by a snowstorm. The only way out was to push his bike and his belongings along the river. Fear, hunger and loneliness set in.

Page only had enough food left for one and a half days. At night he could hear the howls of the wolves.

“They don’t typically attack humans,” he says, “but my fear was that it was six months into winter so they were really hungry and might make different judgment calls.”

Page pushed for three days. Then, just six miles from the village, he saw two snowmobiles emerge over the horizon. The village had dispatched their search and rescue team, knowing there was a lone British cyclist somewhere in the wilderness who hadn’t been seen since the storm.

Page caught their approach on camera, he saw a body bag dragged behind one of the buggies. The danger of his situation dawned on him — and the irony that he had filmed it all.

“I felt like this is ridiculous.” Page says, “If something bad happens and I get found here, they’ll look through the camera and go, ‘Well, this is why he didn’t make it, he was too busy filming himself.'”

But the filming gave Page a purpose beyond the personal feat. It engaged another side of his brain. He explains how normally he just wants to get from A to B in the fastest way possible, but with the camera he had to slow down.

“It was like having to switch on another part of the brain, the filmmaker’s side: saying this is important to capture, you’ve got to set these shots up, talk about your emotions here,” he says.

As the trip went on, the filming became more and more important.

Page realized the long-term opportunities it could bring, and the potential career as an adventure filmmaker — a career that he is now pursuing wholeheartedly, with a trip planned to Alaska later this month and an expedition across Russia on the horizon.

The film also offered an antidote to the loneliness. It offered a chance to share what he had been through.

When the Arctic Ocean came into sight, it was not how Page imagined it would be. Yes, it was wonderfully romantic — the sun was setting and the snow glistening — but rather than being filled with elation, Page was cold and tired and alone.

“Instead of walking off into the sunset, I sat in a bathroom, on a small stool — the only warm place I could find,” he says at the end of the film. “I thought about the lessons this journey had taught me. Maybe I’d proved something to myself, by going to the edge of my map… But, I also realized that perhaps finish lines are better shared.”