Girl dresses up as storm trooper to ask boy with special needs to prom. But that’s just the beginning. 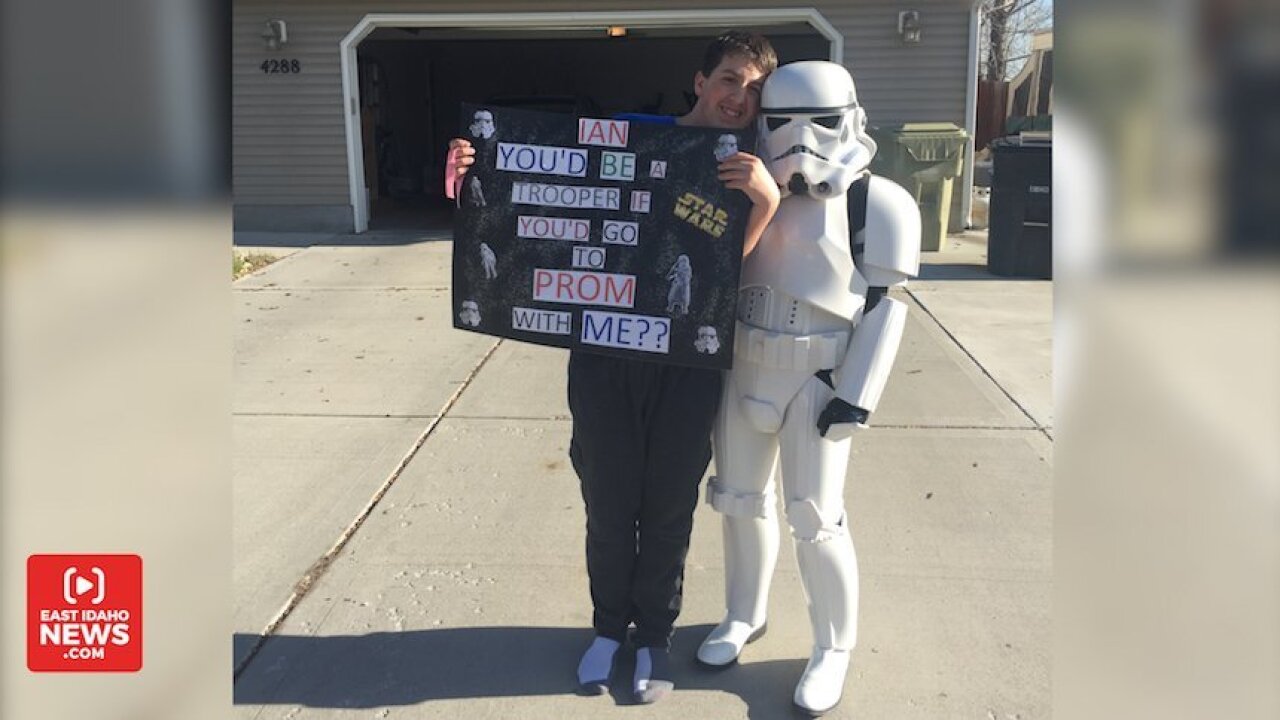 **Embargo: Idaho Falls-Pocatello, Idaho** Teenagers in eastern Idaho often get creative when asking a date to prom. But 15-year-old Shiane Ritchie went above and beyond to help a boy she had never met have a night he’ll likely never forget.

Idaho Falls (EastIdahoNews.com) — Teenagers in eastern Idaho often get creative when asking a date to prom.

But 15-year-old Shiane Ritchie went above and beyond to help a boy she had never met have a night he’ll likely never forget.

Shiane recently learned about a “Special Needs Prom” being held in Idaho Falls and she heard about Ian Taow Benjamin, a 15-year-old Bonneville High School student.

Ian loves Star Wars. So does Shiane. Ian is autistic. Shiane has worked around children with autism for nearly seven years.

So she decided to ask Ian to the prom – in a way they both would love.

“She came to decorate his room with posters and a T-shirt and a Darth Vader cake that said, ‘The Force has a big surprise for you,’” Ian’s mother, Rachel Taow Benjamin, tells EastIdahoNews.com. “(A few days later) she showed up to our house dressed as a Storm Trooper – like in a legit costume.”

Ian was shocked, and when Shiane asked him to be her date, he instantly said, “Yes!”

But the surprises didn’t end there.

“The night of prom she came in a limo,” Taow Benjamin recalls. “It was so awesome.”

The big event was held May 5 at the Pinecrest Event Center. Ian and Shiane danced, ate refreshments, took photos together and created special memories.

Stacy Richie, Shiane’s mother, says her daughter has always had a special place in her heart for people with autism.

“She’s been babysitting them since she was 8 years old,” Richie says. “She’s been bullied before so she attracts those kind of kids and takes care of them.”

For Feel Good Friday this week, EastIdahoNews.com and Ashley Home Furniture surprised Shiane during her Spanish class at Taylorview Middle School. Shiane’s mother, along with Ian and his parents, came along to thank her for making a difference.

After giving her some flowers and gift cards, Shiane said the prom “was so much fun” and she plans to go again.

“Autistic people are just so caring and they don’t get treated very well. I thought it would be nice to take him and I’m so glad I did,” she said.