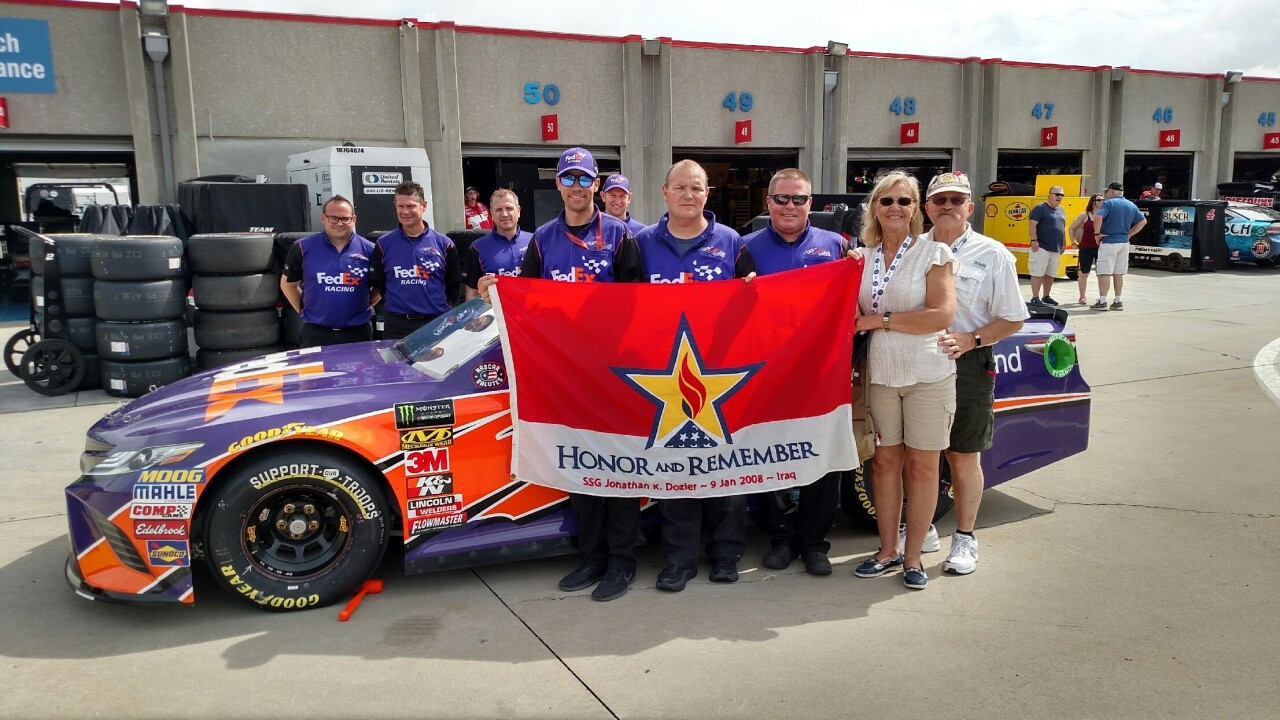 CONCORD, NC – Memorial Day weekend 2018, the unofficial start of summer, will see more than 40 million Americans travel. This weekend, a pair of families with ties to coastal Virginia is hitting the road…to watch others hit the road – in a tribute to the Americans we honor on Memorial Day.

Chesapeake resident Carl Dozier certainly does not consider himself a hardcore NASCAR fan – far from it, actually. However, this weekend, Dozier and his wife drove their RV to Charlotte where they are camping less than 500 yards from entrance to Charlotte Motor Speedway – site of Sunday’s Monster Energy NASCAR Coca-Cola 600. They even had special t-shirts made for the weekend’s festivities. But neither this trip, nor this race, nor this weekend is about them.

“It’s special and meaningful any time we can call the names of the fallen,” Dozier said during a phone interview with News 3.

As part of 600 Miles of Remembrance, the names of U.S. Armed Forces members who sacrificed their lives for our country will be proudly displayed on the windshields of all 40 Monster Energy NASCAR Cup Series cars participating in Sunday’s Coca-Cola 600 at Charlotte Motor Speedway. Joe Gibbs Racing driver Denny Hamlin, a Virginia native, will carry the name of another Virginia native: Jonathan Dozier – Carl’s late son.

Killed in Iraq while fighting Al Qaida insurgents in 2008, Jon Dozier – a graduate of Great Bridge High School, was awarded the Purple Heart and the Bronze Star. His father says Jon was driven by a conviction to serve something greater than himself – a message he included to his father in one of his final letters home before his death.

The Dozier family had t-shirts printed featuring Jon’s photo, birthday and the date of his death. Carl Dozier says he will personally give a shirt to Hamlin prior to Sunday’s race.

“It’s bittersweet,” Carl explained when speaking about his son. “This is the 10th anniversary of the year we lost Jon. But what NASCAR is doing to honor our son and others who made the ultimate sacrifice while carrying out their sense of service is tremendously meaningful to the families of the fallen.”

Their son, U.S. Marine Corps Lance Corporal Darrell J. Schumann, a former resident of Hampton, died January 26, 2005 in a helicopter crash in western Iraq. Sunday, the No. 47 car of NASCAR driver AJ Allmendinger will carry Darrell’s name during the Coca-Cola 600 – and the Schumanns will be in attendance.

“Our family does many things to remember Darrell,” Mary, his mother – an Air Force veteran, explained. “We love to talk about him and let everyone know how great of a son, brother and Marine he was. I think that’s important to many families who have lost a loved one. We don’t forget them and it helps to share our memories with others.”

Unlike the Dozier family, the Schumanns have strong ties to NASCAR. As a family, they would often camp in the infield of racetracks and spend an entire weekend watching races. In fact, Darrell enjoyed the sport so much – he and his brother saved money to purchase lap sponsorships at Atlanta Motor Speedway during the 1996 season so the boys could see their favorite driver: Rusty Wallace.

However, once their son passed away, Mary and Rick’s fandom faded.

“After we lost Darrell, watching NASCAR was not the same, so we drifted away from the sport,” she recalled. “When the TAPS (Tragedy Assistance Program for Survivors) organization reached out to us [about this weekend’s tribute], it was both heartwarming and heartbreaking – knowing our son would not be there to experience what he loved to watch.”

The Tragedy Assistance Program for Survivors (TAPS) is the national organization providing compassionate care for the families of America’s fallen military heroes and has offered support to more than 75,000 surviving family members of our fallen military and their caregivers since 1994.

Mary describes her son as bold, brave and fun-loving – with a magnetic personality.

“Darrell truly loved his family, country and God,” Mary said. “We often repeat a quote that Darrell signed several of his letters back home to us from Iraq with: Air Force by Birth, Marine by Choice, American by the Grace of God.”

This weekend, millions of Americans travel to – and then return home from various activities during Memorial Day weekend. Meantime, on Memorial Day eve, 40 NASCAR drivers will honor those Americans who will never return home.