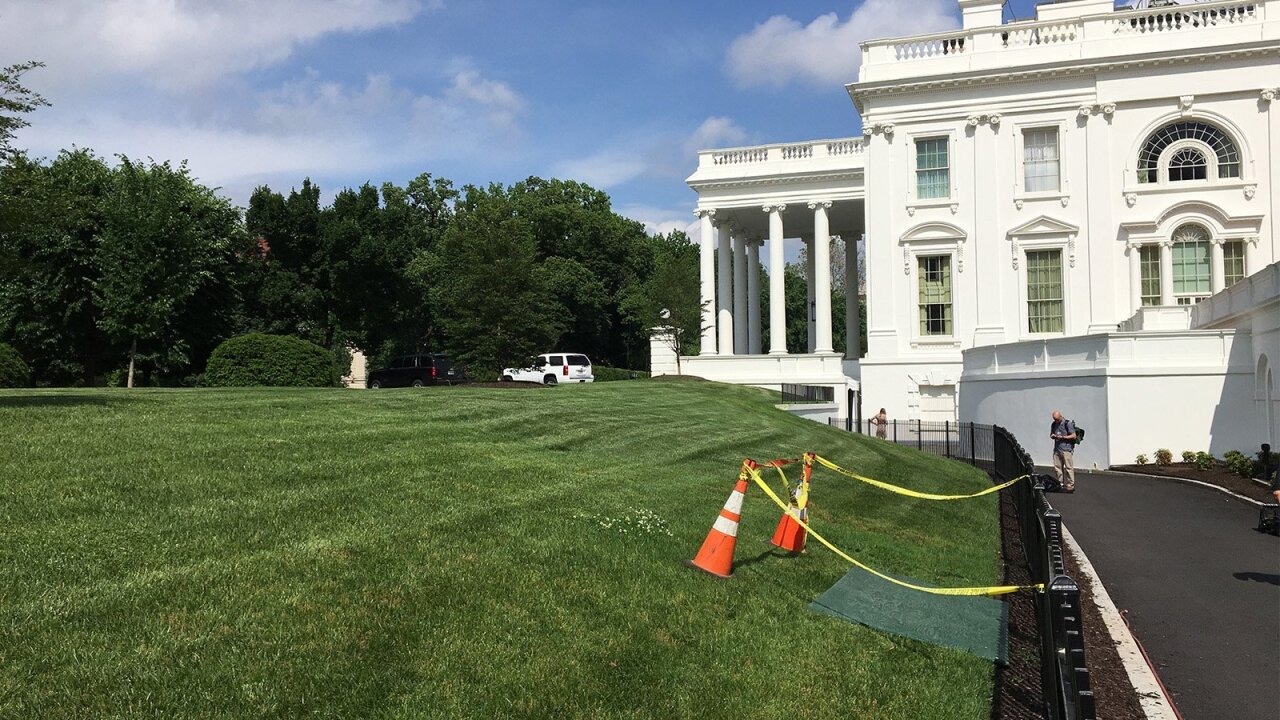 Eyewitnesses first saw the sinkhole on the grassy North Lawn on Saturday, following a week of nearly constant rain in Washington.

There is a gaping hole in this story: A sinkhole has appeared steps from the entrance to the White House briefing room.

Eyewitnesses first saw the sinkhole on the grassy North Lawn on Saturday, following a week of nearly constant rain in Washington.

Eyewitnesses first saw the sinkhole on the grassy North Lawn on Saturday, following a week of nearly constant rain in Washington. While the hole is behind a stretch of wrought iron fence inaccessible to pedestrian foot traffic, it was contained with yellow caution tape and two orange cones. On Tuesday afternoon, a National Park Service ranger covered the hole with a piece of green plywood ahead of a thunderstorm.

“Sinkholes, like this one, are common occurrences in the Washington area following heavy rain like the DC metro area has experienced in the last week. We do not believe it poses any risk to the White House or is representative of a larger problem,” she added.

The geology of the White House doesn’t naturally lend itself to sinkholes, per expert Terry West, a professor of earth, atmospheric, and planetary sciences and civil engineering at Purdue University.

Most sinkholes, West told CNN, form from cavities in underground limestone, but “the geology at the White House is really not that type at all. It’s more of a sandy clay material that is remnant from when the oceans were at a higher elevation,” called “Coastal Plain” terrain.

West suspects the sinkhole resulted from the previous construction on the lawn. This particular stretch of grass has had its share of disruption over the years; during the Obama administration, the lawn was excavated and under construction for months.

“It would seem to be a sinkhole that would come about by an underground collapse of some sort, would be my best guess. It could be some construction debris that was not very highly compacted and has now begun to settle and fill in with soil around it, but it looks like it’d be more related to man-made activities than to natural causes,” he said.

It could also be the result of a leaky water pipe that caused erosion, West said. There is an in-ground irrigation system on the lawn to keep the grass green.

Nevertheless, the first family, staff, reporters and visitors shouldn’t worry about being swallowed up — it’s unlikely that the hole will grow much bigger — and it can be easily filled in with cement grout.