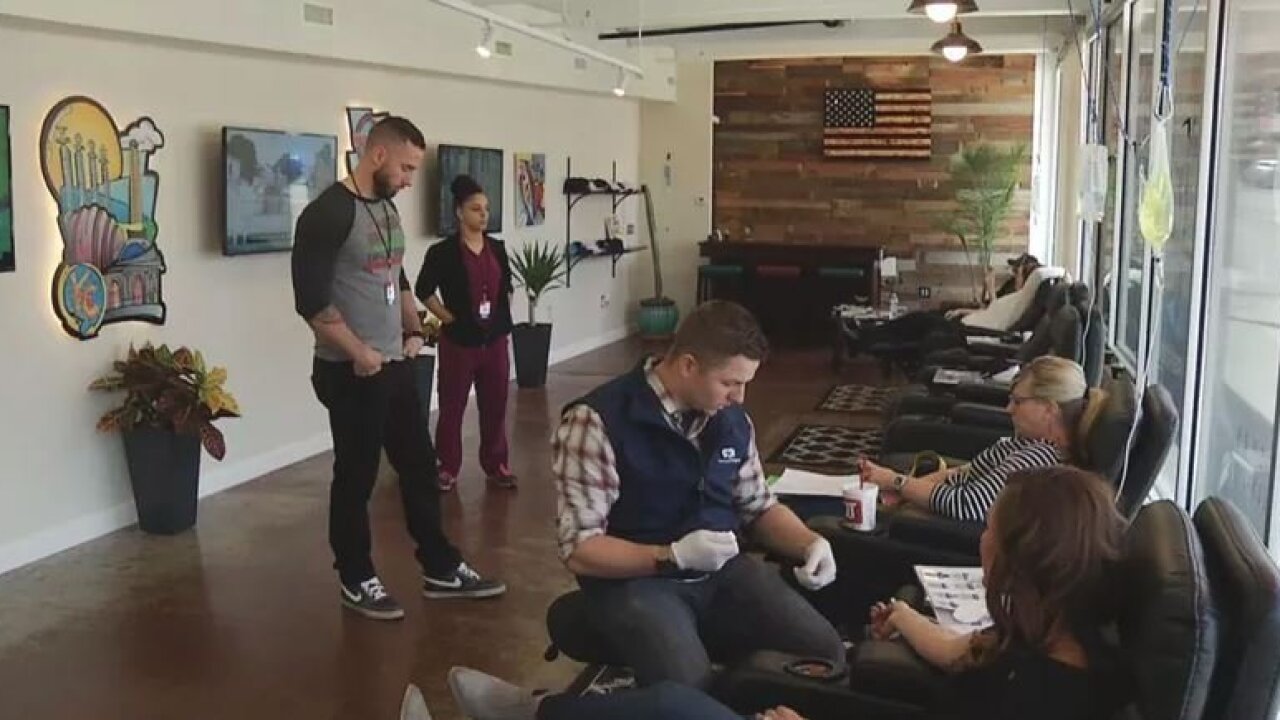 IV therapy is nothing new in the medical community.

Intravenous therapy is defined as the administration of a fluid solution directly into a vein as a therapeutic treatment. Hospitals use it for all kinds of conditions.

In recent years, it’s become something of a fad outside the medical setting. Boutique-like IV therapy spas are popping up all over the country, including Kansas City.

“This is all water-soluble vitamins. Everything you’d find in a multi-vitamin just in an IV form,” co-owner and ICU nurse John Heymach said.

The majority of the clientele is not the hungover college kid regretting the kegger from the night before.

“You have your lawyers. You have your doctors, people preparing for trial … we have insurance execs, radio hosts, nurses that just got off of work,” Heymach said.

Business owner, nurse and mother Katie Kohrs comes to Revive and Rally about once every week.

“Being a full-time business owner, being a nurse as well, being a mom, running around like crazy — sometimes I just get tired and need a boost of energy,” Kohrs said.

Kohrs explained her interest in IV therapy as she was getting the “BBQ Hangover” — one of the multiple specialized IV treatments that vary with the types and quantities of vitamins.

Many of these businesses, including Revive and Rally, offer to bring the service to your home or office. Business professional John Stoner got his first treatment at his downtown office.

“I had a joint commission audit earlier this week — put in 80 plus hours last week through the weekend, felt extremely tired. I’m going back to school too because I do night school too, so I’ve just been running myself ragged,” Stoner explained.

Dr. Justin Ranes is the medical director overseeing the business. He explained why IV therapy is different than downing a bottle of Gatorade.

“This is rehydration, and the advantage of it is that it goes directly into your cardiovascular system without having to be absorbed through your GI tract,” Ranes said.

Ranes also explained they follow strict protocol just like they do in a hospital setting, making sure everything is sterile and safe. Before any IV treatment is administered, customers get their vitals checked. Revive and Rally has turned away multiple potential customers whose blood pressure was too high.

“We’re offering someone the option to get something that they could get over the counter but just get it through an IV so they can feel better faster,” Heymach said.

Treatments range from about $60 to $150 with an additional $40 charge for house calls.