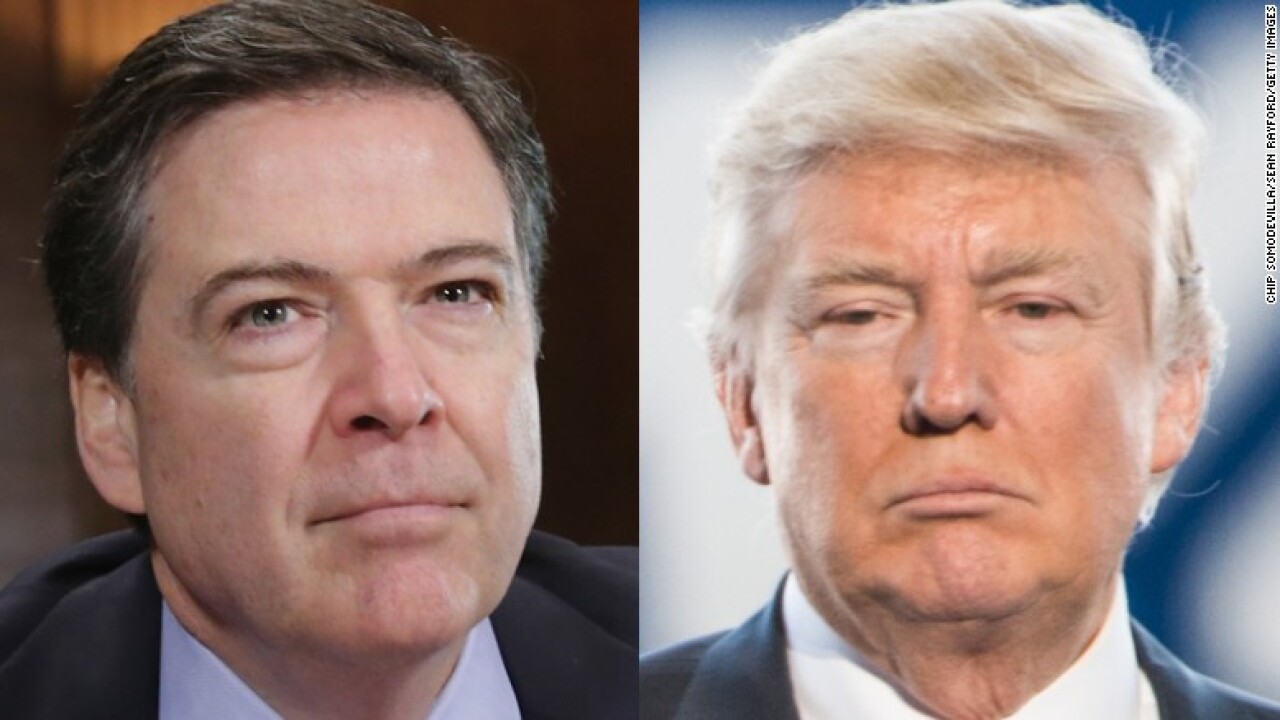 It is nothing less than the most devastating, contemporaneous takedown of a sitting president in modern history.

The James Comey storm, brewing menacingly on the horizon for months, slammed into the White House just after 5 p.m. ET on Thursday, as the first leaks of the fired FBI director’s explosive new book started gushing out.

Proving that revenge is a dish best served cold, Comey waited 11 months to exact his retribution for his dismissal by President Donald Trump last May. When it came it was unsparing, richly detailed and mortifying for the President.

He painted Trump as a relentless liar who is obsessively unethical, devoid of humanity and a slave to his ego, who is clueless about his job and unconcerned about a Russian assault on American democracy.

Jabbing the President in a strikingly personal way, Comey noted the size of Trump’s hands, said his skin looked orange and described white rings around his eyes from tanning goggles.

But Comey isn’t just out to hurt Trump’s feelings. He is on a more profound mission: His book is a parable about the threat from a brazen President who demands a warped concept of loyalty and has only disdain for the rule of law.

CNN obtained a copy of the book and corroborated news reports about Comey’s highly anticipated recounting of his time in the Trump administration.

In one staggering part of the book, “A Higher Loyalty,” Comey said dealing with Trump reminded him of his days prosecuting Mafia kingpins with their “silent circle of assent.”

“The boss in complete control. The loyalty oaths. The us-versus-them worldview. The lying about all things, large and small, in service to some code of loyalty that put the organization above morality and above the truth.”

“What is happening now is not normal. … It is not fake news. It is not okay,” he writes, sketching a brutal, feudal world that seems incompatible with traditional perceptions of the presidency.

All presidents are vulnerable to tell-alls by disgruntled former insiders that expose the enmities, gaffes and scandals of their West Wings. Franklin Roosevelt, Dwight Eisenhower, George W. Bush and Bill Clinton all experienced indictments by disillusioned staffers.

Yet no commander in chief in modern memory has had to endure the humiliation heaped on Trump by Comey, who argues that the President saw the FBI as a personal investigative service bound to do his bidding.

How will Trump react?

The most immediate question now is how Trump, who typically rages over attacks on his image and lives a creed of swift retaliation, will respond to the former FBI director’s portrayal of his “forest fire” of a presidency.

Besieged by scandals, fast-worsening legal entanglements and wrestling with a life and death decision on whether to launch military action in Syria, Trump is humiliated and under indescribable political pressure that may not be conducive to wise decision-making and seems sure to boil over on Twitter.

In a tsunami of bad news for the President just on Thursday, it was reported that the National Enquirer’s parent company had paid off a doorman at one of his properties to keep quiet about a rumor that the President had sired an illegitimate child.

CNN has confirmed neither the story nor the rumor, but if true it would fit into a pattern of payoffs to people alleging transgressions in Trump’s private life.

In yet another stunner, sources familiar with the matter said recordings that Trump attorney Michael Cohen often made of his telephone conversations likely have been scooped up in the FBI raid Monday on the attorney’s apartment, office and hotel room.

CNN’s Jim Acosta reported Thursday that the President had only just begun to cool off after the raid, which partly resulted from a referral to New York prosecutors from special counsel Robert Mueller.

But wall-to-wall news coverage of the leaks was likely to send Trump up the wall all over again, since there are few people he disdains more than Comey.

In an NBC interview last May, Trump blasted the former FBI chief as a “showboat” and a “grandstander.” As recently as Monday, the President called Comey a liar and said he had been right to sack him. Trump has made no secret of his view of Comey as the epitome of a “deep state” effort to destroy him.

Like the furor over the book “Fire and Fury” by author Michael Wolf, published in January, this Trump headache will not fade soon.

Thursday’s revelations were just the start of a week of pain for Trump, as Comey is about to embark on a media blitz, starting with an interview with George Stephanopoulos on ABC’s “20/20” on Sunday. CNN’s Jake Tapper will sit down with the former FBI director next Thursday.

It’s not clear even that the Republican National Committee’s plan to unleash a counterattack on “Lyin’ Comey,” exclusively revealed by CNN’s Jeff Zeleny on Thursday, will be sufficient to rebut the hard-charging claims in the book.

Still Comey’s willingness to write about salacious details of the Steele dossier, including the notorious claim that Trump watched prostitutes urinate in a Moscow hotel room — accounts that have not been verified — could bolster GOP arguments that he is going tabloid just to sell books.

Book to have a long half life

The book is sure to have long-term political and legal consequences.

Its publication on Tuesday is certain to thicken the intrigue over Russian election meddling, and the President’s apparent lack of interest in making the Kremlin pay a price.

In the book, Comey recalls being struck that neither Trump nor his advisers asked top intelligence officials at a meeting in Trump Tower “about what the future Russian threat might be. Nor did they ask how the United States might prepare itself to meet that threat.” Instead, the book says, they focused on “how they could spin what we’d just told them.”

Potentially, Comey’s assault could play into Trump’s thinking as he mulls whether to seek to dismiss Deputy Attorney General Rod Rosenstein, perhaps as a precursor to shutting down Mueller himself.

It will certainly offer fodder for Democrats, who will argue in the midterm elections that Trump lacks the morals, intellect or temperament to be President. But there’s little chance it will loosen Trump’s unshakeable hold on his political support base, which tends to view such media storms as more proof that the establishment is biased against Trump.

Material in the book suggests, however, that Comey, who has already spoken to Mueller’s investigators, will be a crucial witness as the special counsel considers whether the President obstructed justice.

In the book, Comey repeats his claim that Trump asked if he could go easy on former national security adviser Michael Flynn, which he revealed in congressional testimony last year. But he stops short of outlining an obstruction case against Trump:

“I have one perspective on the behavior I saw, which while disturbing and violating basic norms of ethical leadership, may fall short of being illegal.”

Excerpts from the book also reflect just how deeply Comey’s tenure resulted in the FBI being dragged into the center of America’s poisonous politics, a process likely to be exacerbated by days of controversy over his book.

Those who find Comey a flawed messenger with a healthy sense of ego and a holier-than-thou belief in his own propriety may also find ammunition for their views in the book.

In one section, he criticizes Obama administration Attorney General Loretta Lynch as having a “tortured, half-out, half-in approach” to the Clinton email investigation, for which he was excoriated by Democrats.

Comey also writes that he was told by Barack Obama after the election that nothing that had happened had caused the then-President to question his integrity.

“Boy, were those words I needed to hear,” he writes. “I felt a wave of emotion, almost to the verge of tears.”

He wrote that he then told Obama, “I’m just trying to do the right thing.”