Jesse Jackson: Losing MLK ‘hurts all the time,’ but we fight on 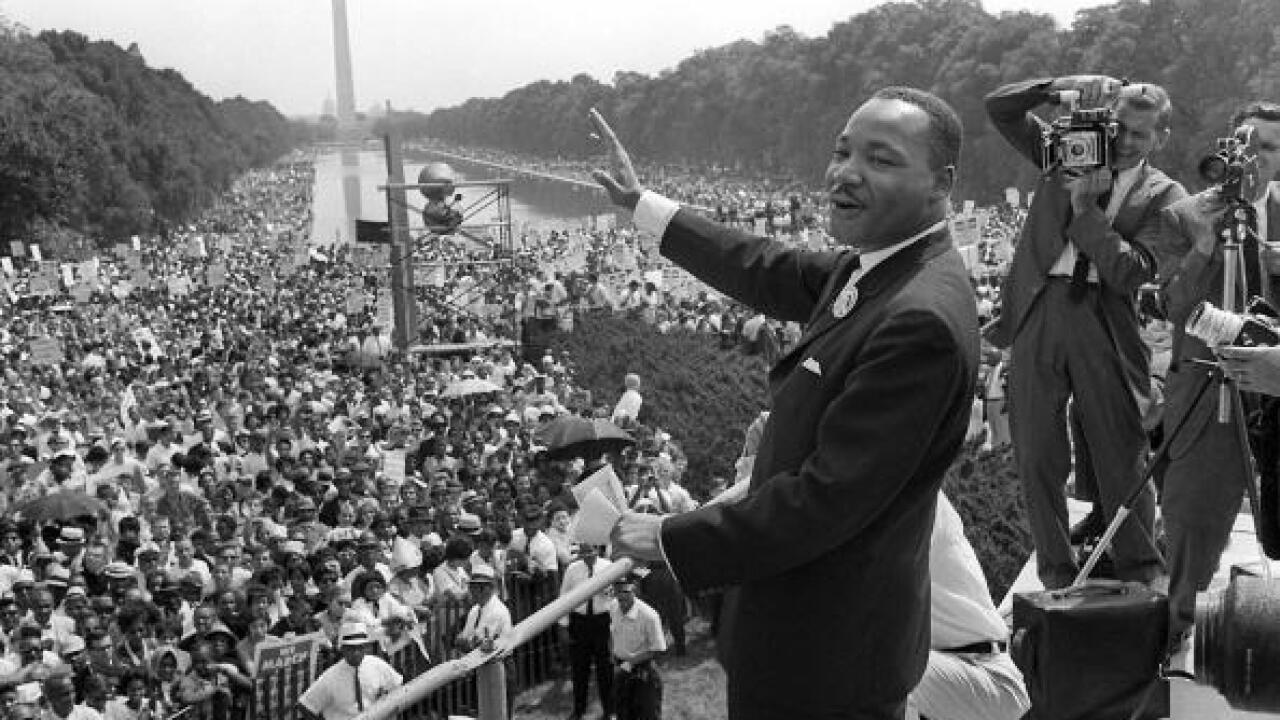 WASHINGTON, UNITED STATES: (FILES) US civil rights leader Martin Luther King, Jr., waves to supporters from the steps of the Lincoln Memorial 28 August, 1963, on The Mall in Washington, DC, during the “March on Washington” where King delivered his famous “I Have a Dream” speech, which is credited with mobilizing supporters of desegregation and prompted the 1964 Civil Rights Act. The US is celebrating in 2004 what would have been King’s 75th birthday. King was assassinated on 04 April, 1968, in Memphis, Tennessee. AFP PHOTO/FILES (Photo credit should read -/AFP/Getty Images)

If you get an error message, please refresh the page.

On April 4, 1968, Jesse Jackson was 26 years old. He was in Memphis, Tennessee, traveling as an aide to Martin Luther King Jr. in an effort to rally support for a sanitation workers’ strike started that February over dangerous working conditions and the deaths of two men who were crushed to death in garbage compactors. Memphis Mayor Henry Loeb had refused to meet with workers or recognize their union. They marched in downtown Memphis wearing and carrying what have become iconic sandwich boards and placards emblazoned with the words, “I Am a Man.”

Local politicians of the time say that the strike was all but broken until King came to Memphis to re-energize the sanitation workers. The trip to Tennessee came amid preparations for a massive demonstration to highlight the issue of poverty in America, The Poor People’s Campaign. Tensions were high at the time for King, who had come under censure for an increasingly vocal stance against the Vietnam War and whose Southern Christian Leadership Conference was facing criticism from a younger generation of black activists who deemed their strategies and tactics too moderate for the urgency of black America’s problems.

When James Earl Ray fired his rifle from a boarding house across from the Lorraine Motel, striking King and ending his life, Jackson was among those present. On the occasion of the 50th anniversary of that devastating moment, I spoke with Jackson — former presidential candidate, legendary activist, founder of the Rainbow PUSH Coalition and elder of America’s struggle for racial equality — about what he remembers and what King’s legacy has been.

Looking back across the decades, Jackson remembered how reluctant and exhausted King was when he traveled to Memphis, that King dreamed in the days before his death of the possibility that fellow activists who at times disagreed with him — like H. Rap Brown, Stokely Carmichael, Roy Wilkins, and Whitney Young — could forge unity. Jackson recalled the power of King’s darkly prescient “I’ve Been to the Mountaintop Speech,” the sound of the gunshot and the wound that always reopens when he travels back to Memphis.

This interview has been condensed and lightly edited for clarity.

CNN: When you remember Dr. King, what first comes to mind?

Jesse Jackson: Coalition. During his last years, there was a multicultural group of us together, from Appalachia and from the Smoky Mountains, Native Americans from the reservations, Latino allies and Cesar Chavez in the southwest country, and folks from New York and throughout the American South. We had a multicultural focus on how to end poverty at home. Whether you were an Appalachian coal miner or a chemical worker, whether you were in the Delta of Arkansas or you were in the cities, we wanted to end poverty and end the war in Vietnam.

CNN: What most stays with you about the day of his death?

Jackson: That he would rather have been somewhere else. We were in a staff meeting about coming to Memphis, because the sanitation workers had been killed. At that time he was being attacked because of his Vietnam war position. The press was challenging his position. Colleagues were attacking him. Ministers locked him out of the pulpit.

So he called me in on a Saturday morning, and he said he had a migraine headache. He asked me what his options are. One, he said, was that maybe, “I’ll just quit. Maybe we’ve done the most we can do in 13 years. We won the Montgomery bus boycott, we won the civil rights acts of 1964 and 1965, we’re moving in Chicago.” But he said, “I can’t quit, because I can’t go back.”

“You know,” he said, “we’ve got to go to Memphis first. Those sanitation workers do very necessary work. If they don’t clean things up, the doctors can’t perform surgery. They work in the stench and with diseases abounding. These are very necessary workers. And they deserve rights. And then we’ll go to Washington and do civil disobedience.”

And so he prayed to God for strength. He came on to Memphis, met with the sanitation workers, met with the ministers. And on that afternoon before, with all of us talking, he said, “I don’t feel like speaking tonight. Jesse, maybe you should go. Andy, you should go.” He wasn’t feeling that well.

But we went over to Mason Temple. It was raining very hard. We walked in the door, the people started cheering. He came in and that’s when he walked through the aisle and gave the “Mountaintop” speech. He said this was a good time to be alive.

He talked about the plane [to Memphis] he had been on. There was a threat that someone might put a bomb on a plane. He talked about that: “And some began to say the threats, or talk about the threats that were out. What would happen to me from some of our sick white brothers? Well, I don’t know what will happen now. We’ve got some difficult days ahead.”

We thought the reference was to the plane, and not to what happened the next day, okay? And he said: “But it really doesn’t matter with me now, because I’ve been to the mountaintop. And I don’t mind.”

[Elsewhere in his remarks, King referenced sacrifice for the struggle in ways that came to be forever marked by his death the following day: “Now, let me say as I move to my conclusion that we’ve got to give ourselves to this struggle until the end. Nothing would be more tragic than to stop at this point in Memphis. We’ve got to see it through. And when we have our march, you need to be there. If it means leaving work, if it means leaving school — be there. Be concerned about your brother. You may not be on strike. But either we go up together, or we go down together. Let us develop a kind of dangerous unselfishness.” He continued: “Like anybody, I would like to live a long life. Longevity has its place. But I’m not concerned about that now. I just want to do God’s will. And He’s allowed me to go up to the mountain. And I’ve looked over.”]

It was just the rhythm of the speech.

The next day, we were excited. We went to work on some songs for that night. We came out of the door around five minutes to six. We were late, because we were supposed to be leaving at five. Dr. King said, “You don’t even have a shirt and tie.” We were supposed to be going to dinner. I said, “For eating, you need an appetite, not a tie.” He laughed. We laughed, you know, we joked that way. He was on the balcony [of the Lorraine Motel] at that time, I was on the ground level. And Ben Branch [editor’s note: In previous interviews, Jackson has identified Branch as being in the parking lot, with Dr. King calling down to him] had been brought from Chicago as a musician. He had played the song “Precious Lord” the week before, in Chicago, on saxophone. And [King] said, “Play my song tonight,” and Ben said, “I will.”

The bullet hit him in the throat. He had been shot in the neck. It was a tremendous moment. I heard some voice say, “Get low!” We dashed to the steps. The picture of Andy Young and I, and others, the picture of us pointing up…we were there. The police were coming toward us with drawn guns and we said, the bullet came from that way, that’s where the bullet came from.

I will say this. Atlanta was his Bethlehem. The meeting at Mason Temple could be a kind of Gethsemane. And the balcony of the Lorraine [Motel] could be Calvary. And after the Crucifixion is the Resurrection, the birth of new hope. I believe there’s come a whole new world, driven by his spirit. When you think from the balcony of the Lorraine Motel to the White House with Barack Obama as president, we never stopped fighting. We never stopped moving, or building coalitions. And we’re still fighting a war on poverty.

CNN: Where do you see Dr. King’s legacy today?

Jackson: When those kids were killed in Parkland, Florida, our cup ran over. Something happened [after the tragic shooting] that was magical. They were marching on the agenda of banning assault weapons and having more background checks. We have nonviolence for another generation, none of their protests were violent. They are multicultural, multiracial, and on message: ban assault weapons. That’s part of the same dream [that King had]. It’s part of the same resurrection spirit.

CNN: What have you thought about when you’ve returned to Memphis over the years?

Jackson: Every time I go back, it pulls a scab off and the wound is still raw. Every time, the trauma of the incident. His lying there. Blood everywhere. It hurts all the time. [In 1968] I left the scene and went and called Mrs. King. She was in the bed, reading. And I said, “Mrs. King?” I said, “He has been shot.” She said, “I’ll come right away.” And then someone else called her and told her he was dead. Whenever I go back, I feel the force of the incident.

As we move away from 2017, the year of Charlottesville, and into 2018 and beyond, what of Dr. King’s legacy will you take into your next challenge?

He freed for us the right to vote. There are [almost] four million blacks in the South who are unregistered. Two and a half million who are registered didn’t vote the last time around. And yet we won the race in New Jersey for the African American lieutenant governor [Sheila Oliver]. We won the race in Virginia, where we had to struggle over a Confederate statue. We won the race in Alabama against Roy Moore. And I think that what we’re beginning to see now is a defining moment — [for the] the discipline of our vote. Voting is the crown jewel of our struggle. There’s a resistance that we’re still fighting, in our politics. Secretary Carson wants to remove discrimination from the mission of the Department of Housing and Urban Development, Secretary DeVos wants to privatize education, Attorney General Sessions says that the Voting Rights Act was an intrusion on states’ rights, [and] there’s President Trump who has shamelessly race-baited. We are facing a headwind. We are going forward, but it is a tug of war.