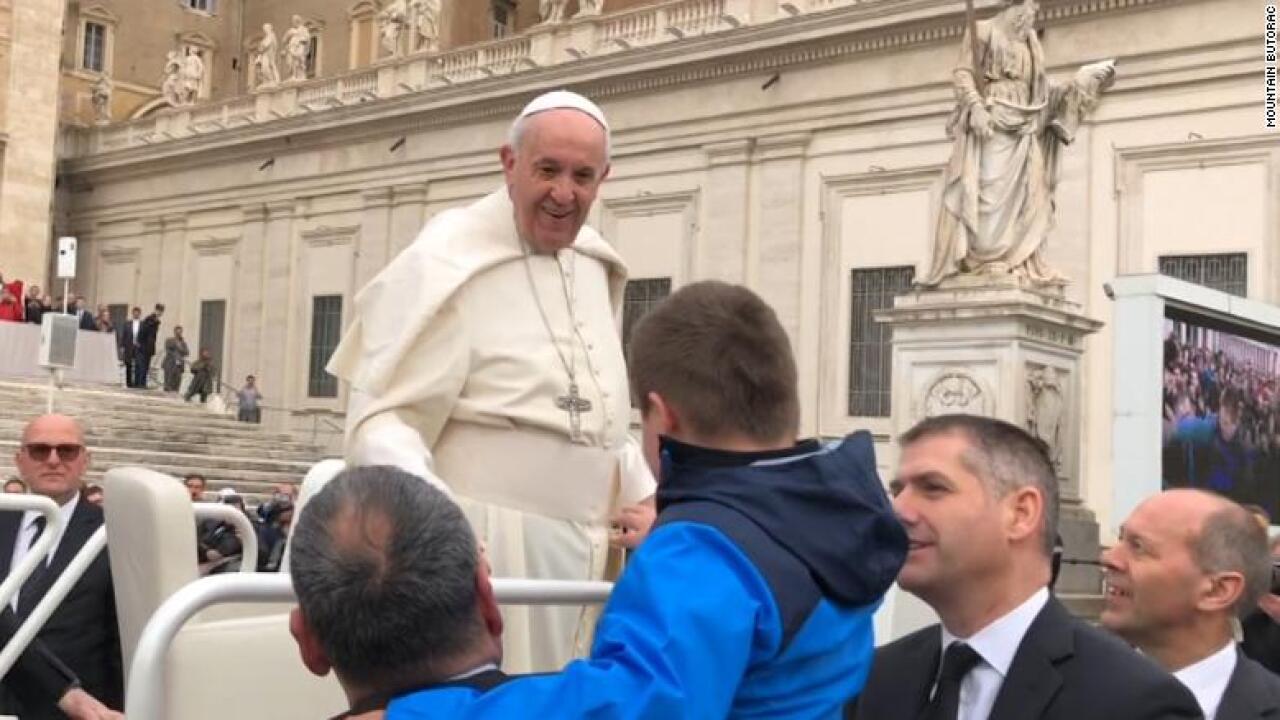 An Ohio family got a miracle this Holy Week: Pope Francis granted their son’s wish with a papal kiss.

Peter Lombardi, 12, was only 9 when he was diagnosed with acute lymphoblastic leukemia in April 2015. His devoutly Catholic family had been set to see the Pope in Philadelphia that September when they found themselves in a hospital as Peter began chemotherapy.

As the family watched the papal visit from his hospital room, someone from Make-A-Wish came in asking for Peter’s wish.

“Peter said, ‘I want the man in the white outfit to kiss me like he’s kissing all those kids.’ I said, ‘Pete, your wish is to get a kiss from Pope Francis?'” his mother, Brenda Lombardi, told CNN.

Make-A-Wish said it couldn’t grant that wish. Instead, sometime in 2019, the foundation would grant his second wish: a light saber fight with Darth Vader.

Peter has been in remission from cancer since June 2017. His parents and three siblings planned a trip to Italy to celebrate their son’s healing and thank God for their blessing during Holy Week this year.

“We never thought it would come to fruition. You can’t come to Rome and expect Pope Francis to kiss your child among the millions of people,” Lombardi said via phone from Rome.

The Lombardis arrived in Rome a few days ago on Palm Sunday. They hired a guide, Mountain Butorac, who works for The Catholic Traveler, to give them a tour of Rome from the Catholic perspective.

Peter’s mother told Butorac about her son’s wish to get a kiss from the Pope. She was surprised when he told her he may be able to make that happen.

On Wednesday, Butorac met up with his good friend, Joanna, who is married to a man who is part of the Swiss Guards responsible for keeping the Pope safe.

“She took us the back way where the Swiss Guards live and we got to meet the Swiss Guards and it was beautiful. She coached us. She said, ‘When Pope Francis comes by, you need to scream and we need to lift up Peter,'” Lombardi said.

One of the Pope’s security guards lifted Peter up and the Pope kissed him on the forehead.

“He didn’t just kiss him, he let him come up and sit on the Popemobile,” she said.

As her son waved back and smiled, Lombardi had an emotional moment. She cried and cried.

Lombardi and her family credit God with helping Peter overcome cancer, as well as guiding him through other hard times in his young life.

“I thanked Him for always surpassing our expectations when it comes to our faith and our trust in Him. You think that when your child gets leukemia, it is a heavy cross and a battle, but through the experience, it was just full of grace,” she said. “God just kept giving us so much hope.”

Children with Down Syndrome, like Peter, have a higher risk of childhood cancer, including acute lymphoblastic leukemia, according to studies.

The family is paying homage to several saints they prayed to when Peter was sick, among them Franciscan saints like St. Anthony of Padua. They will spend Easter in Assisi, Italy, as a way of thanking the Franciscans.

Other stops on their two-week vacation will include Sorento and Medjugorje, Bosnia and Herzegovina, where the Virgin Mary is said to have appeared in 1981.

Peter told his mom he thought the whole experience was great. “He said, ‘The Pope kissed me and blessed me and then blessed me again,'” Lombardi said.