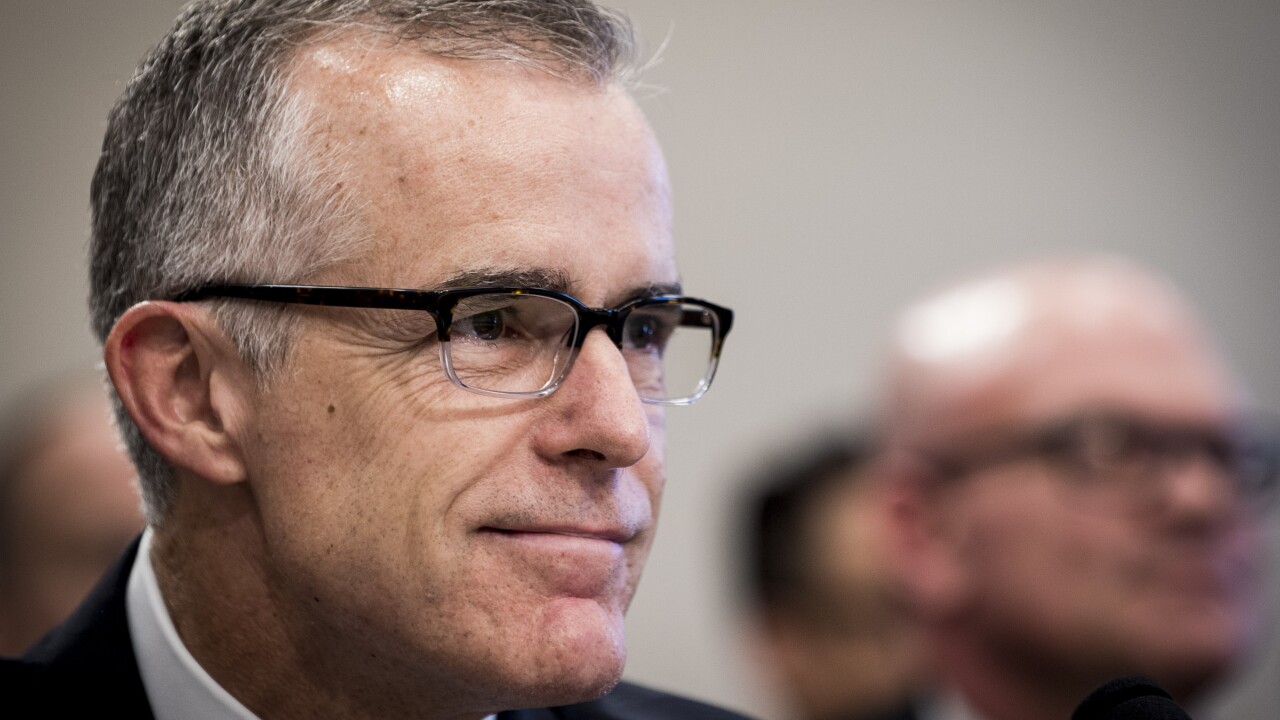 Attorney General Jeff Sessions fired former FBI Deputy Director Andrew McCabe late Friday, less than two days shy of his retirement, ending the career of an official who had risen to serve as second-in-command at the bureau.

McCabe had more recently been regularly taunted by President Donald Trump and besieged by accusations that he had misled internal investigators at the Justice Department.

Shortly after the announcement, Trump tweeted.

“Andrew McCabe FIRED, a great day for the hard working men and women of the FBI – A great day for Democracy,” Trump said. “Sanctimonious James Comey was his boss and made McCabe look like a choirboy. He knew all about the lies and corruption going on at the highest levels of the FBI!”

In a blistering statement Friday night, McCabe said his firing is part of a larger effort to discredit the FBI and the special counsel’s investigation.

“This attack on my credibility is one part of a larger effort not just to slander me personally, but to taint the FBI, law enforcement, and intelligence professionals more generally,” McCabe said. “It is part of this Administration’s ongoing war on the FBI and the efforts of the Special Counsel investigation, which continue to this day. Their persistence in this campaign only highlights the importance of the Special Counsel’s work.”

McCabe had been expected to retire this Sunday, on his 50th birthday, when he would have become eligible to receive early retirement benefits.

But Friday’s termination could place a portion of his anticipated pension, earned after more than two decades of service, in significant jeopardy.

The origin of his dramatic fall stems from an internal review conducted by Justice Department Inspector General Michael Horowitz. That report — the details of which have not been publicly released — is said to conclude that McCabe misled investigators about his role in directing other officials at the FBI to speak to The Wall Street Journal about his involvement in a public corruption investigation into the Clinton Foundation, according to a source briefed on it.

CNN reported on Wednesday that the findings in Horowitz’s report on McCabe were referred to the FBI’s Office of Professional Responsibility, staffed with career officials, who recommended McCabe’s termination. McCabe, accompanied by his lawyer, tried making a last-ditch effort Thursday to avoid the firing, meeting with officials at the deputy attorney general’s office at the Justice Department for several hours while Sessions was traveling, but to no avail.

“After an extensive and fair investigation and according to Department of Justice procedure, the Department’s Office of the Inspector General (OIG) provided its report on allegations of misconduct by Andrew McCabe to the FBI’s Office of Professional Responsibility (OPR),” Sessions said in a statement late Friday. “The FBI’s OPR then reviewed the report and underlying documents and issued a disciplinary proposal recommending the dismissal of Mr. McCabe. Both the OIG and FBI OPR reports concluded that Mr. McCabe had made an unauthorized disclosure to the news media and lacked candor − including under oath − on multiple occasions.”

Horowitz’s office is continuing to investigate how the Justice Department and FBI handled sensitive investigations leading up to the 2016 presidential election — including the probe into Hillary Clinton’s private email server — and a more global report is expected this spring. That closely watched report, which Trump has derided as “already late,” could prove devastating for former and current top officials at the Justice Department and FBI depending on the findings, as the President has sought to weave a narrative of biased “deep state” holdovers from the Obama administration determined to undermine his presidency.

McCabe alleged that the report’s release was sped up “only after” his testimony suggested that he would corroborate Comey’s accounts of his conversations with Trump.

“Here is the reality: I am being singled out and treated this way because of the role I played, the actions I took, and the events I witnessed in the aftermath of the firing of James Comey,” McCabe said in a statement. “The OIG’s focus on me and this report became a part of an unprecedented effort by the Administration, driven by the President himself, to remove me from my position, destroy my reputation, and possibly strip me of a pension that I worked 21 years to earn. The accelerated release of the report, and the punitive actions taken in response, make sense only when viewed through this lens.”

A representative for McCabe said he learned from a press release that he had been fired by Sessions. A Justice Department spokesperson pushed back, saying, “Mr. McCabe and his attorney were informed in advance of any news media.”

McCabe’s representative said he received an email on his FBI account shortly before the Justice Department notified the media, but he was not regularly checking that account, since he was on leave from duties at the bureau.

While former FBI officials say a lack of candor is a death knell for an agent’s career, Sessions’ decision to fire McCabe presented unique political complications.

Trump often used McCabe as a political punching bag on the campaign trail given his wife’s purported past ties to Clinton — going so far as heckling Sessions over the summer for failing to fire McCabe — despite the fact that Trump had interviewed McCabe just weeks prior about serving as FBI director after he ousted James Comey. In December, Trump made a cryptic reference to McCabe’s approaching retirement, tweeting: “FBI Deputy Director Andrew McCabe is racing the clock to retire with full benefits. 90 days to go?!!!”

The full implications of McCabe’s firing on his pension remain to be seen, but he could potentially stand to lose hundreds of thousands of dollars. Retirement benefits for federal employees are based on several variables in employment history, but McCabe’s salary is not public and the FBI declined to release it to CNN.