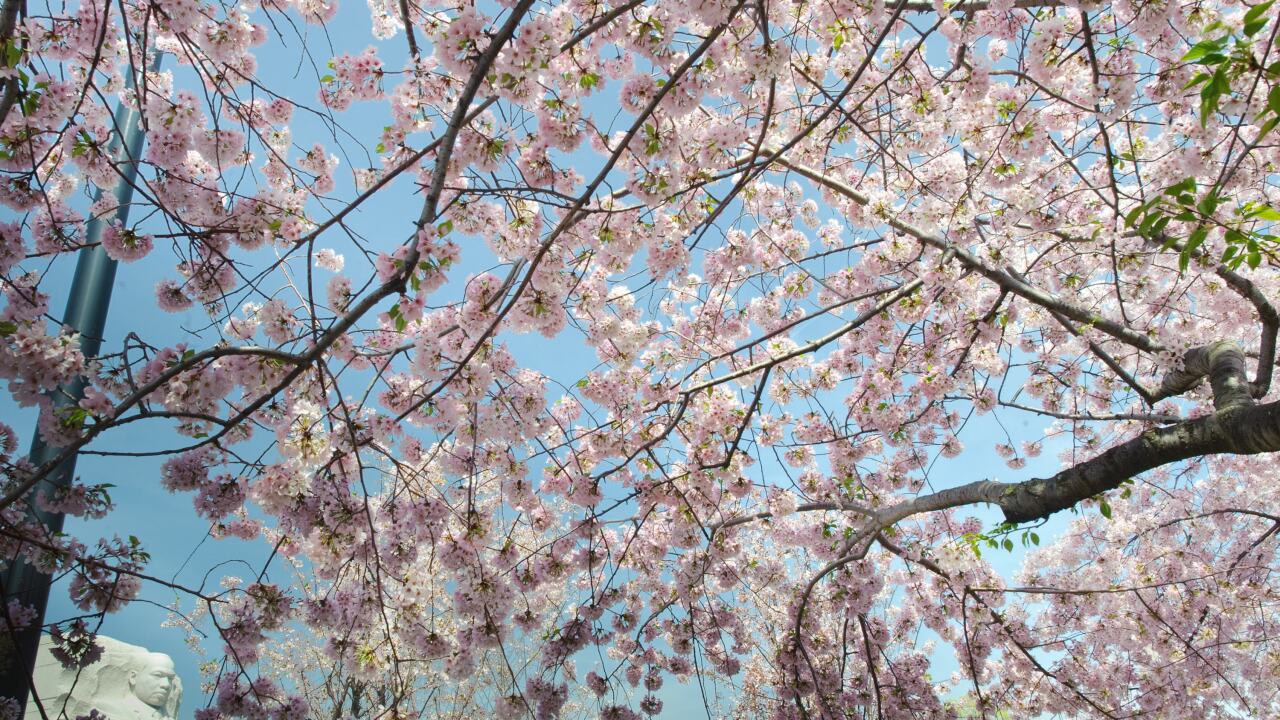 The “Stone of Hope” statue at the Martin Luther King Jr. Memorial (L) is seen under cherry blossoms on March 23, 2012. The National Cherry Blossom Festival runs March 20 – April 27 and marks the centenary of the gift of the 3,000 cherry trees by the mayor of Tokyo to the city of Washington, DC in 1912. AFP PHOTO/Mandel NGAN (Photo credit should read MANDEL NGAN/AFP/Getty Images)

WASHINGTON D.C. – It’s a Washington tradition that isn’t subject to partisan bickering or a lobbyist’s best efforts to influence.

It’s the annual blooming of the US capital’s cherry blossoms, which are predicted to be in peak bloom starting on March 27 and running through March 31, according to the National Park Service.

If you want to see those pink and white petals still attached to trees, that’s the best time to travel to the National Cherry Blossom Festival to see the cherry trees in their full splendor.

The National Cherry Blossom Festival will start on March 17 with four full weeks of programming through April 15.

The peak bloom date is defined by the park service as the day when 70% of the blossoms are open on the cherry trees surrounding the Tidal Basin. The dates vary annually depending on the weather, the agency says.

Although the initial predictions were for an early peak this year, “this week’s cooler than forecast temperatures have necessitated moving the projection to the last week of March,” the National Park Service announced on March 12.

The blossoms usually peak between the last week of March and the first week of April, but the park service reports that warmer or cooler temperatures have led to earlier blooms (March 15, 1990) and later blooms (April 18, 1958).

The festival commemorates the 1912 gift from Tokyo of 3,020 cherry trees to Washington.

The first trees actually arrived two years earlier, a gift from the city of Tokyo and due in part to the advocacy of Eliza Ruhamah Scidmore, one of National Geographic Society’s first female board members.

These trees turned out to be diseased and were destroyed. In 1912, first lady Helen Herron Taft planted one of the first of more than 3,000 replacement trees sent from Japan.

The 1912 gift of trees included 12 varieties, but now two varieties — the Yoshino and Kwanzan — dominate.

More than 20 years later, civic groups and local government came together in 1935 to hold the first official festival.

The pink blossoms of the Kwanzan trees are often found in the East Potomac Park area, while the white blossoms of the Yoshino are found closer to the northern part of the Tidal Basin near the Washington Monument.