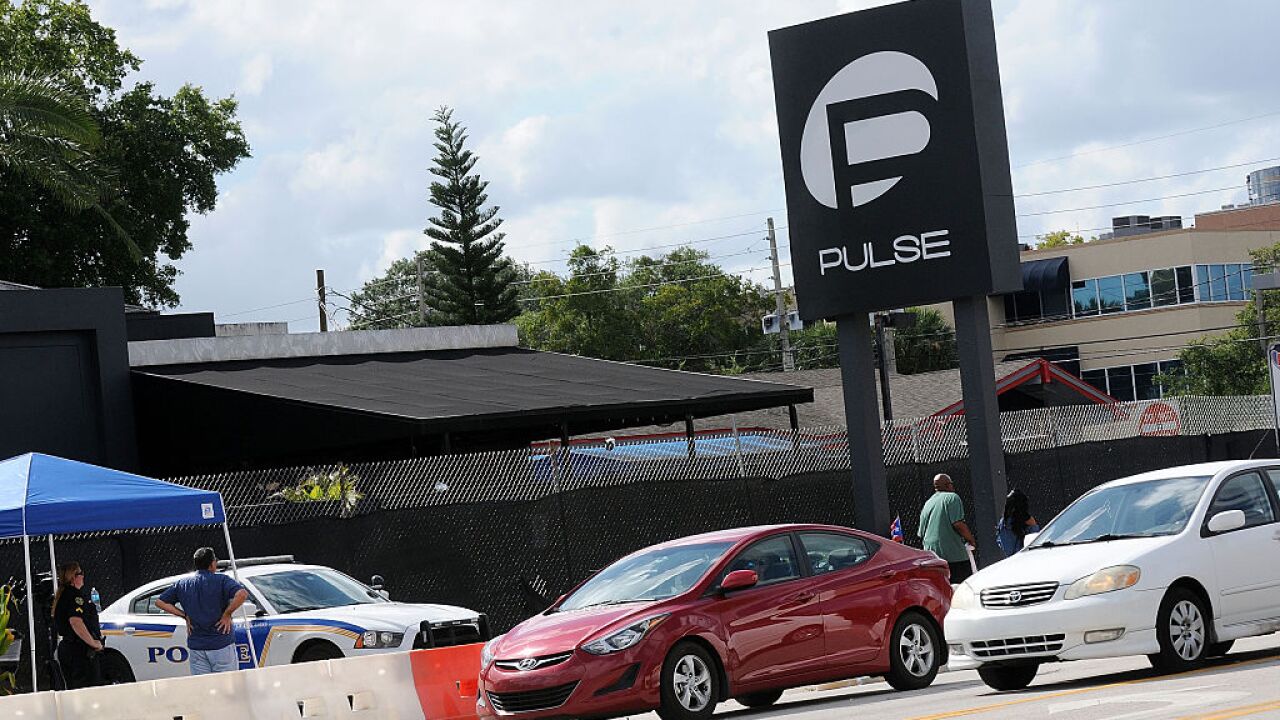 ORLANDO, FLORIDA – JUNE 21: Vehicles cross in front of the Pulse Nightclub on June 21, 2016 in Orlando, Florida. Orlando community continues to mourn deadly mass shooting at gay club. The Orlando community continues to mourn the June 12 shooting at the Pulse nightclub in what is being called the worst mass shooting in American history, Omar Mir Seddique Mateen killed 49 people at the popular gay nightclub early last Sunday. Fifty-three people were wounded in the attack which authorities and community leaders are still trying to come to terms with. (Photo by Gerardo Mora/Getty Images)

urvivors of the 2016 Pulse nightclub shooting are opening old wounds to seek justice as the trial of the gunman’s widow opens in Orlando.

Jury selection began Thursday in the federal trial of Noor Salman, who is charged with providing material support to a foreign terrorist organization and obstruction of justice for allegedly misleading law enforcement agents investigating the massacre on June 12, 2016.

Salman has pleaded not guilty to all the charges. If convicted, she could face life in prison.

Prosecutors believe Salman was aware of her husband’s plans and will argue that she could have tipped off authorities to prevent the mass shooting at the gay nightclub, which left 49 people dead and more than 50 others wounded.

Salman’s attorneys will claim that their client had no prior knowledge about Omar Mateen’s plans and that she was a wife enduring her husband’s abuse. One of her attorneys has said that Salman suffers post-traumatic stress disorder due to years of physical and mental abuse, CNN affiliate WKMG reported.

Defense attorneys and prosecutors are considering prospective jurors from a pool of 600 people. Jury selection is expected to take between seven and 10 days.

Putting together a completely impartial jury will be a difficult task, especially because the trial is being held in downtown Orlando, about two miles from where the massacre took place.

Two of the four prospective jurors questioned on Thursday morning before a lunch break progressed to the final jury pool.

Two were dismissed — a mother on maternity leave who lives two blocks from the Pulse Nightclub, and a man who grew up near Pulse and said his professional responsibilities would make it difficult to give his full attention to the trial, which the judge and prosecutors have estimated could take four to five weeks.

Prospective jurors faced a series of questions from US District Judge Paul Byron, who inquired about their feelings about terrorism or whether they personally knew anyone affected by the Pulse massacre or the recent school shooting at Marjory Stoneman Douglas High School in Parkland, Florida.

Byron also asked about jurors’ media exposure of the event prior to the trial, and how they felt about lawful gun owners.

Orlando attorney and former CNN legal analyst Mark O’Mara says there are several other factors that will also make the jury selection challenging.

“It is going to be amazingly difficult to seat a jury in this case because not only do the potential jurors live in central Florida, but we have had an enormous backlash against terrorist acts in the past 17 years since 2001, and this case, like the Boston Marathon case, will be felt as an opportunity to right those wrongs,” O’Mara said.

“The defense has to acknowledge that everybody sitting on that jury is going to feel that. And they have to do their best to bring all of that out to the forefront,” he added.

What to expect during the trial

To sustain one of Salman’s charges, prosecutors would need to prove that Mateen carried out the massacre and that he did it in support of ISIS.

Jurors will see surveillance video showing Mateen walking inside the nightclub with a gun and cellphone video from inside a restroom where he opened fire. A terrorism expert is also expected to testify about Mateen’s social media posts, CNN affiliate WFTV reported.

The gunman said he was a soldier of ISIS during a 911 call with a hostage negotiator but a federal judge still needs to decide whether that evidence should be admitted in court, WKMG reported.

The courtroom will be open to survivors, victims’ families and members of the public, but no cameras will be allowed.

Who is Noor Salman?

Salman is the only person charged in connection with the mass shooting in Orlando. Her husband died in a shootout with police responding to the attack at the nightclub.

The 31-year-old grew up in Rodeo, California after her parents emigrated from the West Bank in 1985, according to The New York Times. She told the Times that she met Mateen on a dating site in 2011 and the couple married later that year.

She was Mateen’s second wife. The couple and her son, who was 3 at the time of the massacre, lived about two hours away from Orlando in Pierce, Florida.

Salman was abused by Mateen, her attorney said in a statement after her arrest. “Noor has told her story of abuse at his hands. We believe it is misguided and wrong to prosecute her and that it dishonors the memories of the victims to punish an innocent person.”

She was arrested seven months after the shooting in California where she had been staying with family. Authorities said Salman had given them conflicting accounts.

She initially told investigators that she had no idea that Mateen would do anything violent and later, she said that she had a suspicion that her husband might be planning an attack, officials said.

It is unclear how much she knew about her husband’s intentions but law enforcement officials said Salman accompanied Mateen on trips to scout potential targets. The widow also told investigators her husband spent thousands of dollars buying, among other things, the guns used in the massacre weeks before the attack.

Her attorneys have said she could not predict what Mateen intended to do and tried to convince a judge that the statements she made to investigators immediately after the shooting were obtained unlawfully. Prosecutors argued that Salman gave her statements voluntarily, CNN affiliates reported.