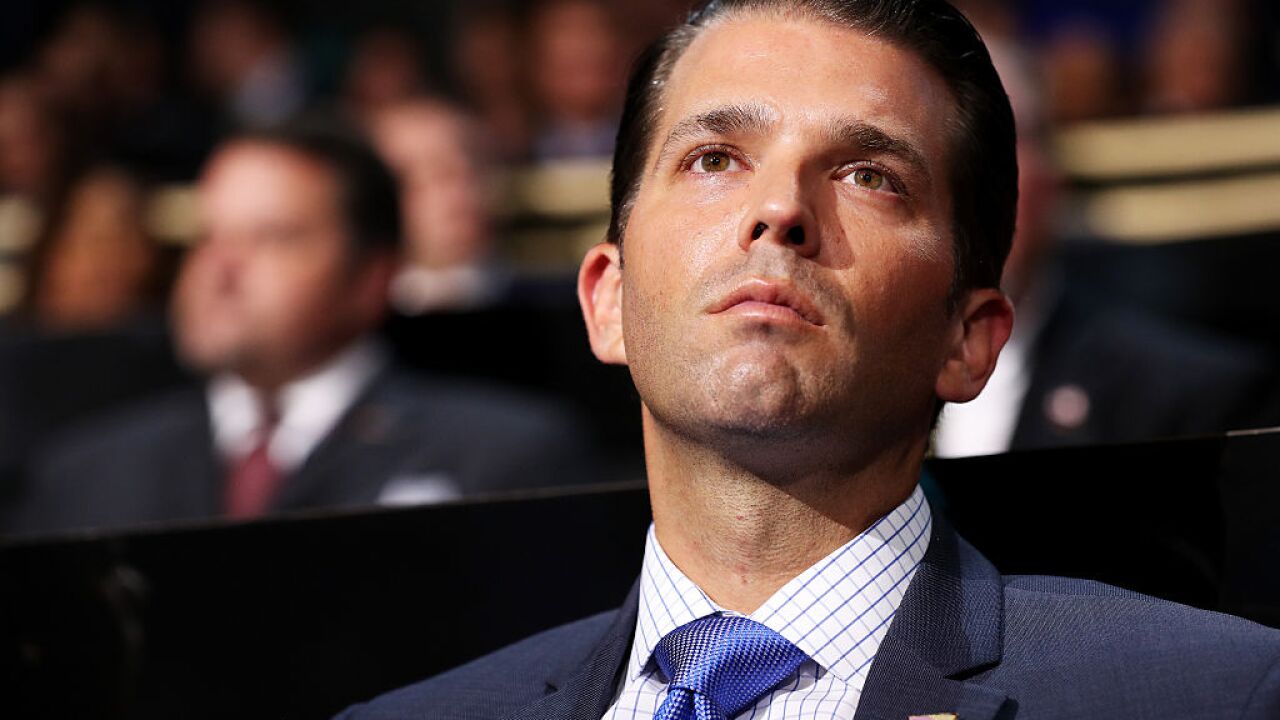 CLEVELAND, OH – JULY 18: Donald Trump Jr. listens to a speech on the first day of the Republican National Convention on July 18, 2016 at the Quicken Loans Arena in Cleveland, Ohio. An estimated 50,000 people are expected in Cleveland, including hundreds of protesters and members of the media. The four-day Republican National Convention kicks off on July 18. (Photo by John Moore/Getty Images)

A Massachusetts man has been charged after Donald Trump Jr.’s family and others received threatening letters with suspicious powder last month, the US attorney for Massachusetts announced Thursday.

The criminal complaint filed by US attorney Andrew Lelling’s office said Daniel Frisiello, 24, was charged with five counts of mailing a threat and five counts of false information and hoaxes. The announcement said Frisiello was arrested Thursday morning and is scheduled to appear in federal court in the afternoon.

The complaint said investigators were able to identify Frisiello by tracing a glitter bomb he ordered with his name to one of the people who also received the suspicious powder.

“You are an awful, awful person,” court filings accuse Frisiello of writing to President Donald Trump’s eldest son. “I am surprised that your father lets you speak on TV. You make the family idiot, Eric, look smart.”

The complaint said that in addition to Trump Jr., threatening letters with harmless white powder implicitly posing as something deadly were received by four other people.

A letter to Michigan Democratic Sen. Debbie Stabenow expressed apparent anger at Stabenow for supporting the father of three alleged victims of disgraced USA gymnastics doctor Larry Nassar. The father tried to attack Nassar in the courtroom, and Stabenow said she wished “security had been a little slower.”

Another letter to a US attorney referenced a now-deceased defendant in a child pornography case. A fourth envelope was sent to a Stanford law professor trying to recall the California judge who sentenced a Standford athlete convicted of sexual assault to six months in prison. And a fifth envelope had a message attacking a California Republican actor running for Congress.

The complaint also accuses Frisiello of using an internet prank service to send a glitter bomb to the Stanford professor, and said investigators discovered Frisiello ordered the glitter bomb and tried to send others, including some to the President’s family, and that Frisiello posted messages on Facebook similar to messages in the letters. The complaint said investigators found further evidence in Frisiello’s trash.

Lelling said in a statement that the powder in all five letters was “inert” and that no one was harmed.

“There are plenty of appropriate, lawful ways, to express your opinion and voice your displeasure, but inducing panic and sending what is believed to be a weapon of mass destruction through the mail is certainly not one of them,” Lelling said.