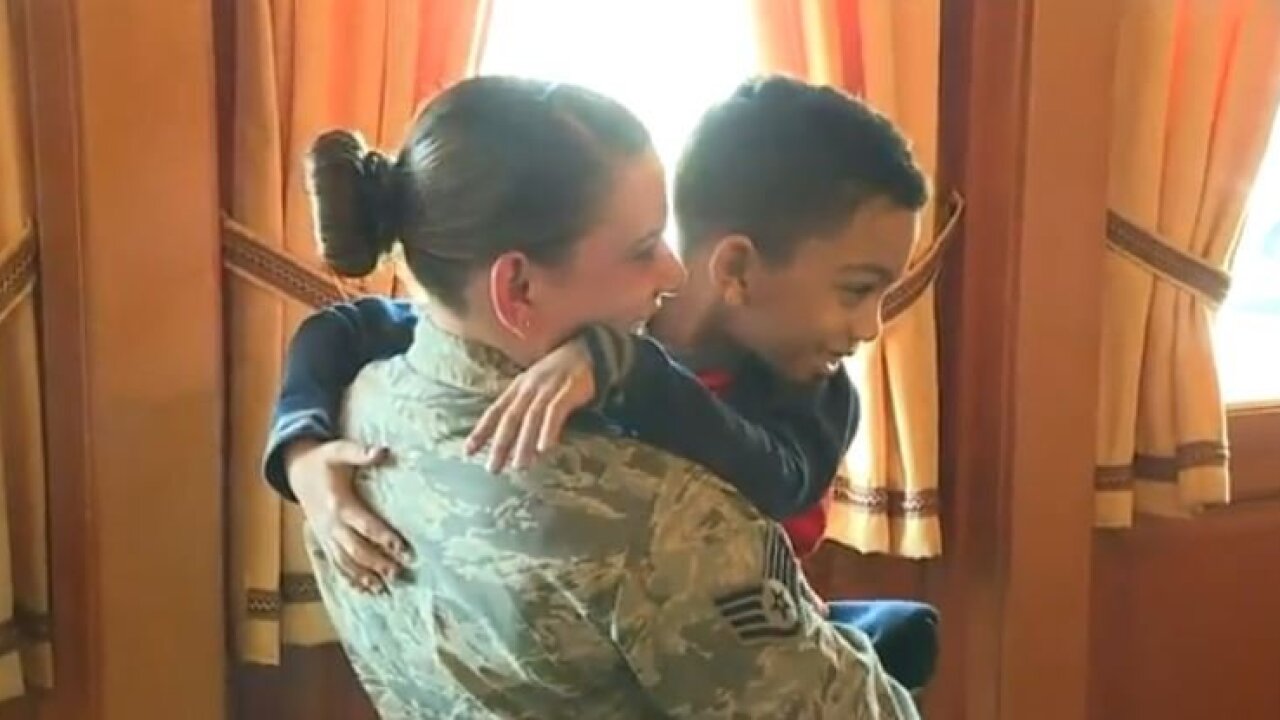 ***Embargo Scranton-Wilkes Barre*** Staff Sergeant Kayla Wadley said the hardest part about her most recent deployment was being away from her 7-year-old son Treau.

It was a long-awaited homecoming for a woman serving overseas with the Air Force, and her family surprised her young son Saturday in Columbia County.

***Embargo Scranton-Wilkes Barre***
Staff Sergeant Kayla Wadley said the hardest part about her most recent deployment was being away from her 7-year-old son Treau.

Carla Maynard cried tears of joy as she embraced her daughter, Staff Sergeant Kayla Wadley, who has been overseas since last spring.

“I left in April of last year, so it’s been about 10 months,” Wadley explained.

Wadley told Newswatch 16 the hardest part about her most recent deployment was being away from her 7-year-old son Treau.

Wadley allowed Newswatch 16 to come along as she surprised her son at Olive Garden near Bloomsburg. We even helped her document it on Facebook live for her friends and family/

“So I kind of feel like a kid on Christmas, like it’s been so long, so I’m just so excited. I’m probably going to start crying.”

They were happy tears. Treau was a little camera shy, but couldn’t resist giving his mommy a big welcome home hug.

While Wadley has been stationed in Germany, her son stays with his grandparents, Carl and Kimberley Levan, who say the last 10 months have been hard.

“You really don’t know how much you miss your child when they’re away and serving the country, and then they come back and then they reunite with their child that they haven’t been with for so long, and we’re the grandparents, but it’s nothing like being with their mother,” Kimberley Levan said.

Now, when Wadley returns to duty in three weeks, she’ll be taking Treau back with her to Germany, which makes the whole situation bittersweet for his grandparents.

“It was a little tough there in the beginning. He wasn’t used to it, but now I’m going to miss it.”

Until then, Wadley’s family will be spending as much time with her and her son as possible.