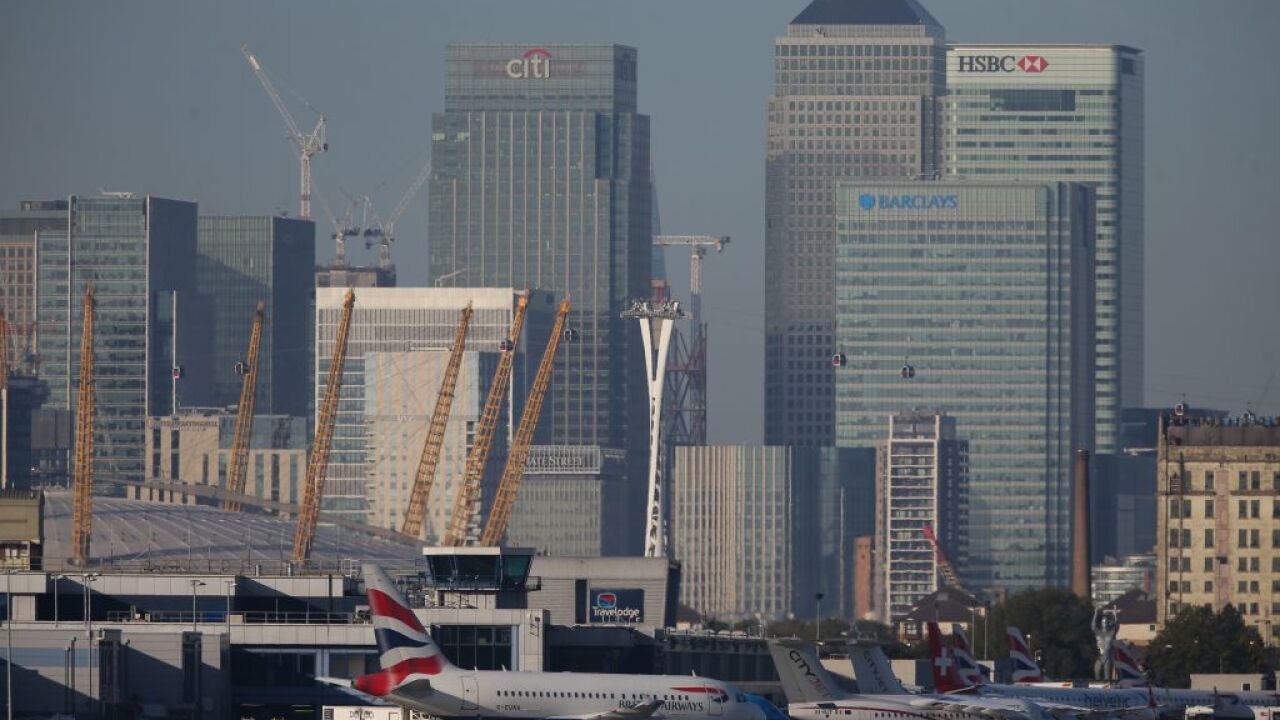 British Airways airplanes are seen on the runway with the towers and buildings of the Canary Wharf financial district in background before taking off at London City Airport in London on October 27, 2017. British Airways parent group IAG forecast on October 27 a 20-percent jump in operating profit this year thanks to rising demand and falling costs. Operating profit before exceptional items, and at current fuel prices and exchange rates, was forecast to hit 3.0 billion euros ($2.7 billion) in 2017, IAG said in an statement. That was up from 2.5 billion euros in 2016. / AFP PHOTO / Daniel LEAL-OLIVAS (Photo credit should read DANIEL LEAL-OLIVAS/AFP/Getty Images)

London City Airport will remain closed through Monday after a World War II bomb was discovered by construction workers in the nearby Thames River a day earlier.

After the discovery of the unexploded bomb near King George V Dock on Sunday, the airport canceled all flights and put an exclusion zone in place, airport Chief Executive Robert Sinclair said in a statement.

“I recognize this is causing inconvenience for our passengers,” Sinclair added, saying that the airport is “cooperating fully with the Met Police and Royal Navy and working hard to safely remove the device and resolve the situation as quickly as possible.”

The airport said it is “hoping to resume normal operation” on Tuesday, according to a tweet from the airport’s official account, and urged all passengers due to fly to contact their airlines for further information.

Metropolitan Police and the Royal Navy were deployed to the scene to examine the bomb and have confirmed it as a “500 kg (1102 pounds) tapered end shell measuring approximately 1.5 meters (4.9 feet),” according to a police statement issued Monday. “The timing of removal is dependent on the tides, however, at this stage we estimate that the removal of the device from location will be completed by tomorrow morning.”

The Royal Navy implemented the 214-meter exclusion zone to “ensure that the ordnance can be safely dealt with whilst limiting any risk to the public,” the police statement said.

In an effort to minimize the disruption, officers are going to homes within the exclusion zone to make residents aware of any safety arrangement put in place, the statement added.

London City is an international airport located in the borough of Newham in East London. The area was heavily industrial and highly populated during WWII. The Royal Docks, where the runway is now located, were a main entry point on the Thames for goods and commerce.

The airport, which is much smaller than London Heathrow Airport, caters to business travelers heading to destinations in the UK, Europe and the United States.